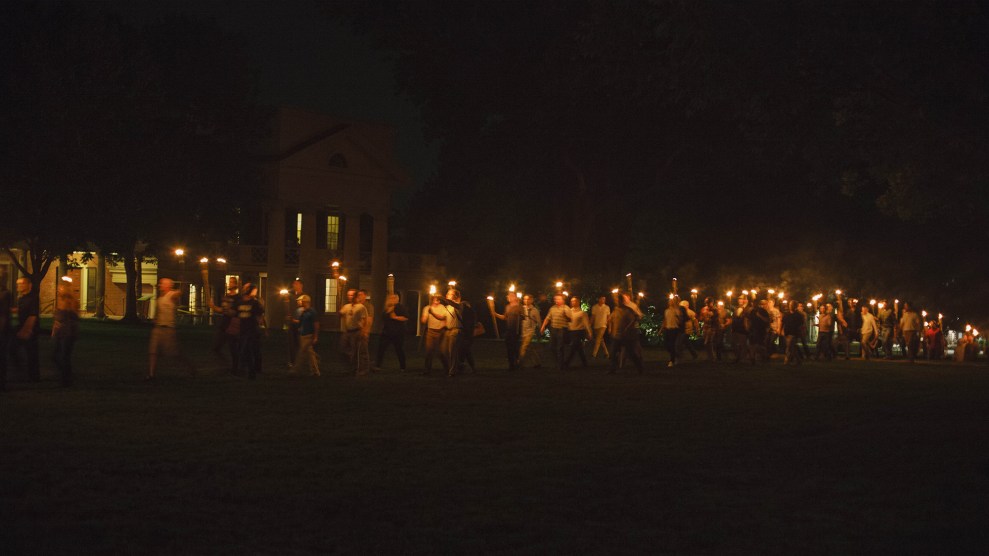 Neo Nazis, Alt-Right, and White Supremacists take part a the night before the 'Unite the Right' rally in Charlottesville.Shay Horse/ZUMA Press

It was one of the defining moments of Donald Trump’s presidency. On August 15, 2017, three days after a white supremacist drove a car into a crowd of counterprotesters at the Unite the Right rally in Charlottesville, Virginia, killing 32-year-old Heather Heyer, Trump held a press conference in the lobby of his New York City tower.

He started off okay, reiterating “in the strongest possible terms” his condemnation of “this egregious display of hatred, bigotry, and violence.” But as the press conference continued, Trump’s impulse to defend the rally’s participants and reapportion blame onto political critics won out. “You had some very bad people in that group,” Trump said, at one point, of the white supremacist protest. “But you also had people that were very fine people, on both sides,” he continued, thus equating a racist mob with people who showed up to protest a racist mob. In case there was any ambiguity, Trump spelled it out a few minutes later: “You had a lot of people in that group that were there to innocently protest,” he said, adding: “There are two sides to a story.”

Trump was rebuked by Republican House and Senate leaders (though not always by name), foreign heads of state, and his chief economics adviser. On Fox News’ The Five, conservative talking head Greg Gutfeld called Trump’s remarks “pure ignorance.” That was then. Three years later, Trump’s “very fine people” moment has become foundational to the Biden campaign’s message that the “soul of the nation” is in peril, and Trump and his supporters have settled on a different line: They argue that Trump simply never said what he said about Charlottesville.

A slick video from the right-wing PragerU on “The Charlottesville Lie” has more than 3 million views on YouTube. The pro-Trump site Breitbart News has published at least 61 stories on what it calls the “Charlottesville Hoax” since the beginning of 2019. On Monday, after Biden once again criticized Trump for his Charlottesville comments in an interview with a Pittsburgh TV station, the president’s reelection campaign pushed out a video purporting to debunk it as one of “4 BIG Biden lies.”

Joe Biden keeps lying about President Trump, and the media keeps letting him get away with it.

In effect, Trump and his supporters have turned one of his presidency’s lowest moments into a loyalty test, by redefining what happened in the context of three of the pillars of his fall campaign—an attempt to delegitimize “the media,” defend his most militant supporters, and cast the president’s opponents as violent radicals.

To understand how Trump’s remarks have been spun, it helps to revisit what he actually said. When he praised “very fine people,” Trump insisted that he was not condoning the behavior of the white supremacists, but instead praising some other group of people who were there in support of Confederate monuments. “I’m not talking about the neo-Nazis and the white nationalists—because they should be condemned totally,” he said. “But you had many people in that group other than neo-Nazis and white nationalists.”

Trump’s defenders have seized on that line to argue that it’s false to say Trump praised white supremacists. But that requires a willful ignorance of who organized the rally and who attended it. Unite the Right was not some spontaneous demonstration, nor was it a big-tent gathering meant to rope in a broad coalition. It was plainly advertised as a white supremacist rally, by and for neo-Nazis. It was supposed to be menacing. And it was the only rally in Charlottesville that day (other than the counterprotests). There was no second group. The Washington Post’s fact-checker noted that “The 207-page independent review commissioned by Charlottesville…makes no mention of peaceful pro-statue demonstrators.”

“I looked the night before,” Trump said at one point during his press conference. “If you look, there were people protesting very quietly the taking down of the statue of Robert E. Lee.”

The rally “the night before” was the famous tiki-torch parade, in which attendees shouted “Jews will not replace us”—not the kind of thing you can find yourself unintentionally partaking in. And Unite the Right’s support of the Lee statue was mostly just a pretext. As Vox’s Jane Coaston noted, “it is fascinating just how little the statue of Lee, or honoring Confederate veterans, seemed to matter to the organizers and attendees of Unite the Right.” Instead, promotional materials for the rally described it as an attempt to, for instance, “end Jewish influence in America.”

And he did more than just sympathize. Not only was he saying that “some” attendees at a white supremacist rally were “fine people,” his impulse was to use the aftermath of a terrorist attack to say that he also believed they were right. Trump viewed what happened in Charlottesville as an attack on his own supporters, so he defended their honor.

“So this week it’s Robert E. Lee,” Trump said. “I noticed that Stonewall Jackson is coming down. I wonder, is it George Washington next week? And is it Thomas Jefferson the week after? You know, you really do have to ask yourself, where does it stop?”

You weren’t imagining this. It’s all on tape. The transcript is on the White House website. There was a reason David Duke immediately thanked Trump for his “honesty & courage” afterwards. There’s a reason why so many Republicans who have otherwise had Trump’s back felt compelled to criticize him then. Trump “messed up,” said then-speaker-of-the-house Paul Ryan. Senate Majority Leader Mitch McConnell issued a statement saying “there are no good neo-Nazis.” Sen. Tim Scott (R-S.C.) visited the White House to explain to the president why Trump’s comments were “painful.”

But that’s where the story diverges. Trump’s critics within the party had little incentive to dwell on the incident; continuing to criticize someone for both-sidesing Nazis would, after all, raise uncomfortable questions about why they continued to support someone both-sidesing Nazis. So the dissenters got their statements out, but over the next three years, the Charlottesville Truthers drowned them out.

By late 2018, Dilbert creator and Trump fan Scott Adams was calling the idea that Trump had praised white supremacists “fake news” on Fox News. A few months later, Steve Cortes, a former member of Trump’s National Hispanic Advisory Council and current campaign adviser, dubbed it the “Charlottesville hoax” in a column at RealClearPolitics. By that point the Bulwark, a site founded by conservative Trump critics, had caught on to this shift, describing it as an effort “to create a more palatable version that would fit comfortably with their support for Trump.”

But the biggest catalyst for this evolution was Joe Biden. When the former vice president kicked off his presidential campaign in April of 2019, his very first word was “Charlottesville.”

“The President of the United States assigned a moral equivalence between those spreading hate and those with the courage to stand against it,” Biden said in his launch video. “In that moment, I knew the threat to this nation was unlike any I’d ever seen in my lifetime.”

Rationalizing Trump’s words became essential, not just to defend the president but to undercut his most likely Democratic opponent. So supporters began parsing the transcript.

Candace Owens, a popular pro-Trump commentator, said on Fox News that “you can go and you can look up the full speech at what Trump said—he specifically said I’m not speaking about white supremacists or Nazis.”

On The View, Texas Rep. Dan Crenshaw claimed that “in the same sentence” Trump had stated he was “definitely not referring to white nationalists.”

Around this time, Trump himself revisited his comments in an interview with conservative radio host Mark Levin. “You never said anything positive about neo-Nazis and Klansmen, but they continue to push that line, don’t they?” Levin asked.

Levin, helpfully, suggested that “by groups you mean protesters, not the Klan and neo-Nazis,” to which Trump assented. “Many of those people were from University of Virginia, they were from all around the neighborhood, the area,” Trump said, and, once again, indicated that they had a point: Lee was “probably the greatest general in the history of our country in terms of strategic brilliance.”

There’s an existential need among Trump defenders to belabor this point, to become mini Jim Garrisons rewinding the tape to show what really happened. It’s become an article of faith conservatives must echo in order to properly support Trump. But it also serves another function: Charlottesville was also a formative moment in the creation of antifa as a conservative bête noir. What Trump alluded to at his 2017 press conference—that counter-protesters “with the black outfits and with the helmets, and with the baseball bats” shared responsibility for the violence—echoed for months in the form Fox News segments about the violent and illiberal left.

Now those fears have become the very linchpin of the president’s fall campaign. Three years after Charlottesville, the party is increasingly receptive to the idea of vigilante violence against leftist demonstrators. At the Republican National Convention, the party featured the McCloskeys, the rich St. Louis couple famous for pointing guns at Black Lives Matter protesters marching through their gated community. A member of Congress from Louisiana, Clay Higgins, fantasized on Facebook about shooting Black demonstrators.

Unlike Heather Heyer’s killer, Kyle Rittenhouse, the Illinois teenager who allegedly crossed state lines with an assault rifle to confront Black Lives Matter protesters in Wisconsin and shot three people, has become a conservative celebrity. Tucker Carlson praised him as a patriot willing to stand up where Democratic cities wouldn’t—“17-year-olds with rifles decided they had to maintain order when no one else would,” he said. An incoming Republican member of Congress shared a meme hailing Rittenhouse for having “fought back.” A Christian fundraising site raised a quarter of a million dollars for Rittenhouse’s legal defense. And on Monday, Trump broke his silence on the episode by asserting that Rittenhouse had acted in self-defense. “He was in very big trouble,” Trump said. “He probably would have been killed.” This time, he didn’t equivocate; the very fine people are only on his side now.