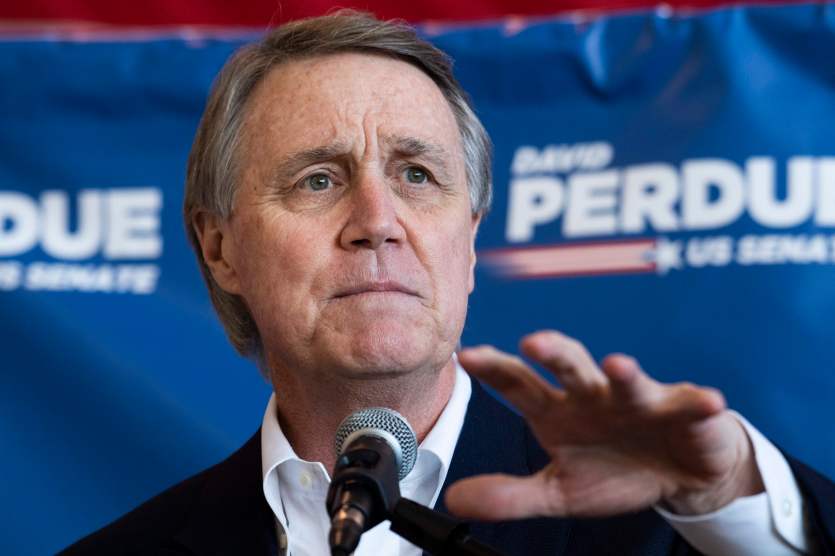 After the 2017 tax bill championed by President Donald Trump passed, Mnuchin and the Treasury had to write rules on how the legislation would work in practice.

Of the hundreds of pages of new regulations the agency developed, Perdue wrote about his concern with one extremely narrow rule: The owners of professional sports teams were being excluded from a valuable tax break being granted to many other businesses that are structured so that the companies don’t pay taxes but the owners do.

“I hope you will reconsider,” Perdue wrote in the 2019 letter.

Many such letters on regulatory matters are signed by multiple senators, sometimes dozens. But in this case Perdue alone wrote and signed the letter. Why Perdue got interested in an obscure tax regulation, which would impact at most only a small set of the richest Americans, is unclear. Perdue was not on the committee that crafted the legislation, making his in-the-weeds lobbying on the arcane regulation unusual, congressional experts said.

The Treasury ultimately declined to adopt the revision Perdue sought. If the regulation had been altered as Perdue wanted, it would have been a boon for some of his largest donors. Perdue has received hundreds of thousands of dollars in campaign contributions from the owners of professional sports clubs, including now-fellow Georgia Sen. Kelly Loeffler, who co-owns Atlanta’s WNBA team, the Dream.

Perdue’s office did not answer questions about why he sent the letter or whether he discussed the matter with any sports team owners.

Perdue and Loeffler, who was appointed to her role earlier this year, are locked in runoff elections to be held Jan. 5 with the balance of the Senate in play. If both Republicans lose, Democrats will take over the chamber, potentially allowing President-elect Joe Biden to implement more of his agenda than he would under a divided government.

Jon Ossoff, Perdue’s Democratic challenger, has cast Perdue as a member of the Washington “swamp” who caters to the interests of corporate donors.

Perdue was one of the 2017 tax bill’s biggest boosters, publicly describing it as a windfall for average Americans. “A single mom making $41,000 with a child is going to get a 75% tax cut,” he told a reporter when it passed. “This is a great day for the middle class.”

Before Perdue became a senator in 2015, he was a top executive for a string of companies, including Reebok, where in the early 2000s the company inked major licensing deals with the NFL, the NBA and the NHL.

A review of his campaign contributions shows that Perdue has taken more than $425,000 from the owners of professional sports teams and their relatives. Some of the top donors include the DeVos family, which owns the Orlando Magic; John Ingram, who owns the Nashville SC soccer team; Los Angeles Kings owner Philip Anschutz; and Cleveland Browns owner Jimmy Haslam.

On the same day Perdue sent Mnuchin the letter, he received $3,000 in donations from three lobbyists at GeorgiaLink Public Affairs Group, a lobbying firm that was representing the Atlanta Braves. Because of the Braves’ ownership structure, it’s unlikely the team would have been affected by the regulation, but around that time, MLB was lobbying on the rule, urging the Treasury to give its team owners the tax break.

Perdue’s campaign expenditures suggest he was in Atlanta that day, Jan. 23, 2019. One of the lobbyists who contributed, John “Trip” Martin, said he couldn’t recall if the contribution was made at a fundraiser but said he did not discuss the tax exemption with Perdue.

Another Perdue donor in the sports world is Loeffler.

Before being picked by Georgia’s governor to fill a vacant Senate seat in late 2019, Loeffler and her husband were prominent members of the business community and major donors to Republicans in the state and nationally.

Together, the couple has given about $70,000 in campaign contributions to Perdue. Mary Brock, who co-owns the Dream with Loeffler, has given Perdue more than $38,000.

Loeffler did not respond to questions about whether she discussed the tax break regulation with Perdue. A spokeswoman for the team also declined to answer specific questions, saying in a statement that “the Atlanta Dream is not a political entity, and we are in the business of sports and entertainment. We are focused on building a successful team on the court and creating a top fan experience.”

Like many WNBA teams, the Dream has not been profitable.

Reversing the regulation would have certainly benefited Loeffler if the Dream became profitable, but tax experts ProPublica spoke to were split about whether a reversal could have cut her tax burden even if the team remained in the red.

The landmark 2017 tax overhaul didn’t just lower the headline tax rates for corporations such as Exxon or Facebook. It also included a more complicated but extremely valuable tax break for businesses known as pass-throughs. A pass-through is a corporate structure—anything from a solo graphic design operation to a large professional sports team—that doesn’t pay taxes itself. Instead the income “passes through” to the owners, who then are on the hook for the taxes.

The new tax law granted a 20% deduction to most, but not all, of these businesses. The hastily drafted bill left open to interpretation which sorts of businesses would be eligible to get this tax break. With tens of billions of dollars per year at stake, that ambiguity set off a flurry of lobbying as the Treasury Department set about writing regulations.

A group of prominent tax academics who analyzed the bill warned that “complex rules governing this new deduction will invite gaming opportunities because there is no particular logic as to who clearly fits into the preferred categories. As a result, taxpayers will be incentivized to engage in aggressive and socially costly tax gaming to fall within the haphazardly drawn lines.”

Perdue’s January 2019 letter amounted to an effort to shift those lines to the benefit of sports team owners. He asked that Mnuchin “allow owners of professional sports teams to claim a Section 199A deduction,” using the formal legal citation for the tax break.

It followed a similar push in October 2018 by MLB Commissioner Rob Manfred. In his letter to the Treasury, Manfred pleaded for the agency to let club owners take the tax break.

Perdue also spoke on the phone to Mnuchin while the regulation was being hashed out in late November 2018, according to the Treasury secretary’s public calendar. The topic of the phone call is not specified.