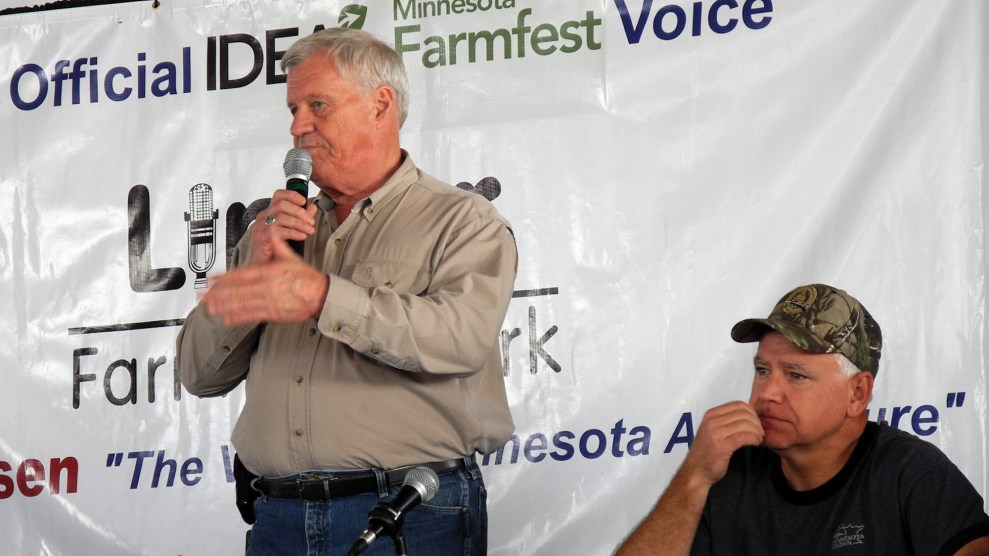 Even before the apparent defeat of President Donald Trump, the 2020 election has already shaken up US farm policy. Rep. Collin Peterson (D-Minn.), the lion of the House Agriculture Committee, lost his seat to right-wing firebrand Michelle Fischbach. After Fischbach spent months attacking Peterson as a servant of what she called the “socialist agenda” of the House’s Democratic leadership (even though he’s easily the most conservative Democrat in the House), she won by a landslide.

That leaves a power vacuum in the House Agriculture Committee, which shapes US food and farm policy by writing the twice-a-decade farm bill. Peterson served as the committee’s top Democrat since 2007, and started his second stint as its chairman in 2019, after the Democrats claimed the House in the midterm elections.

With Peterson out, agribusiness lost one of its most potent friends in Congress. Representing a western Minnesota district carpeted with subsidized soybean and corn crops, Peterson has long championed the status quo of US farm policy, which has been embedded in farm bills since the 1990s: using direct payments and subsidized crop insurance to convince farmers to maximize production of corn and soybeans. The policy virtually ensures low prices for these commodities, providing cheap feed for the meat industry and cheap inputs for ethanol makers, another business interest Peterson supports. It also generates a robust market for patent-protected genetically modified seeds and the herbicides they’re designed to withstand.

Peterson’s campaigns hoovered up agribusiness cash, and the industry mourned his defeat. The American Farm Bureau Federation, an insurance conglomerate that doubles as the most prominent agribiz lobbying outfit, issued a note expressing “our thanks to Rep. Peterson for his decades of service in the House of Representatives.”

Peterson dominated agriculture policy in an era when climate changed emerged as mounting threat to our food system.  Historic droughts bedeviled the crucial fruit, vegetable and nut growing regions in California, and ever-fiercer spring storms pounded the corn and soybean fields of the Midwest, creating a quiet and devastating soil-erosion crisis. The farm bills he helped shape did little to prepare farms for the ravages of climate change. While he didn’t outright deny the existence of global warming, Peterson consistently belittled its importance. “They’re saying to us [that climate change is] going to be a big problem because it’s going to be warmer than it usually is,” he told the Wall Street Journal in 2009. “My farmers are going to say that’s a good thing since they’ll be able to grow more corn.” He tirelessly fought efforts to regulate agriculture, helping ensure unimpeded emissions of potent greenhouse gases like methane from manure and cattle digestion, and nitrous oxide from fertilizer and manure.

“What is our goal? Planting all those trees? I’m actually cutting down the forest,” Peterson told reporters last year.

During negotiations over the historic and ultimately failed climate legislation known as the Waxman-Markey bill in 2009, Peterson used his legislative clout to shape it to Big Ag’s liking: exempting farmers from its cap on greenhouse gas emissions but inserting provisions that would have lavished them with cash rewards for practices that do little or nothing to sequester carbon. A year later, he co-sponsored legislation that would have blocked the Environmental Protection Agency from regulating greenhouse gas emissions. He was still at it in 2019, “resisting the push within his party’s progressive wing to advance a national strategy to fight climate change,” Politico reported. “What is our goal? Planting all those trees? I’m actually cutting down the forest,” Peterson told the publication, referring to his own land in Minnesota.

The question now becomes who succeeds him. The Democrats held onto the House on election day, so that means the Democratic Steering and Policy Committee, led by the House Speaker, will decide. Rep. Nancy Pelosi (D-Calif.) is widely expected to maintain her hold on the speakership in the next Congress. While Pelosi and her team can choose anyone on the House Ag Committee as chair, seniority on the ag committee traditionally drives the choice.

By that metric, three candidates have emerged. Rep. David Scott (D-Ga.), who has served on the agriculture committee for nearly 20 years, has the most seniority; followed by Rep. Jim Costa (D-Calif.), who represents a swath of California’s ag-centric San Joaquin Valley; and Rep. Marcia Fudge (D-Ohio), a stalwart of anti-hunger policy whose district includes much of Cleveland and Akron.

“With each wildfire, hurricane, or flood more devastating than the last, it is incumbent upon us to ensure food security for future generations.”

Scott, a member of the Congressional Black Caucus, is the likeliest contender. He represents a semi-rural district in the outskirts of Atlanta, and he is currently the chairman of the House Agriculture Subcommittee on Commodity Exchanges, Energy and Credits. In negotiations over the 2018 farm bill, he successfully pushed a provision to fund $80 million in scholarships at 19 agriculture-focused  historically Black colleges and universities.

In a Nov. 5 letter to colleagues, Scott expressed his desire to take the post: “With each wildfire, hurricane, or flood more devastating than the last, it is incumbent upon us to ensure food security for future generations,” he wrote. “The threat of climate change is a present and growing danger, and we must promote sustainable agriculture solutions that are economically viable, ecologically just, and support the social fabric of our rural communities.”

If he succeeds in his bid and follows through on that statement, Scott would not only be the first Black House ag committee chair—he’d also be the first one to take climate change seriously.