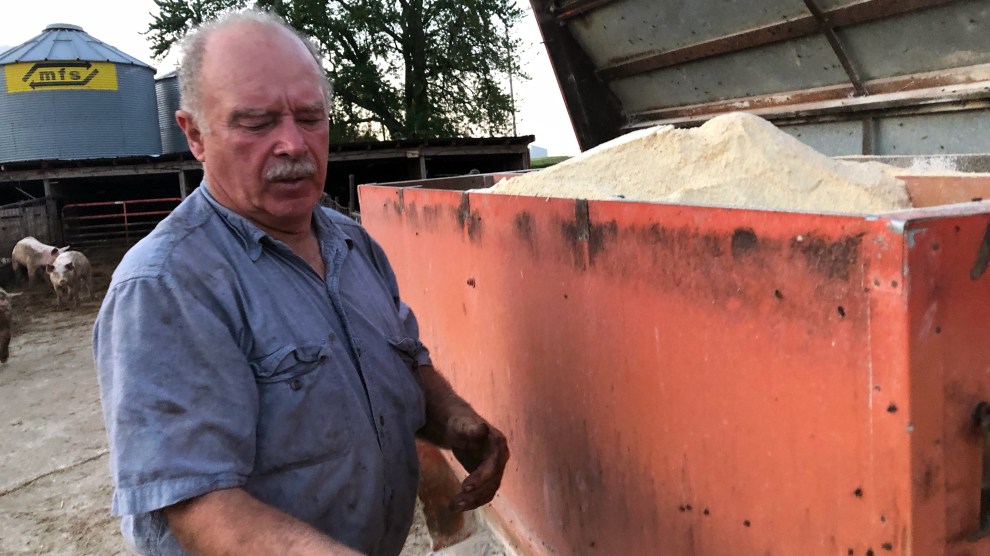 This spring’s relentless storms severely delayed planting in the Midwest and will likely pinch this year’s corn and soybeans. Fifth-generation farmer Brian Corkill called 2019’s the wettest spring he’d ever seen in his 29 years of tending the land. Volatile, rainy springs are already on the rise in the upper Midwest, and will likely occur more often still as the climate continues to warm.

On a trip to Iowa and Illinois in early June, I was inspired to find Corkill and others thinking hard about how to safeguard their fields from climate chaos. You’ll get to know some of them on the latest episode of Bite, our food podcast:

As if delaying the planting season and submerging fields weren’t enough, severe winter and spring floods are triggering another crisis—one that’s much harder to quantify. I wrote about it in March:

Soil loss, on a grand scale, right in the region that provides a huge amount of our food supply. The Midwest boasts one of the globe’s greatest stores of topsoil, more than half of which has been lost in the past 50 years. Topsoil is the fragile, slow-to-regenerate resource that drives agriculture. As University of Washington ecologist David Montgomery explained in his terrific 2007 book Dirt: The Erosion of Civilizations: “With just a couple feet of soil standing between prosperity and desolation, civilizations that plow through their soil vanish.”

Rick Cruse, a professor of agronomy at Iowa State University and a leader of the Daily Erosion Project, was my guide to the toll exacted by this spring’s storms. He’s a slender fellow with closely cropped greying hair and a gentle, patient way of explaining things. We drove the rural roads around Ames on a rare sunny, dry day in early June.

Here and there, we saw a robust stand of rye cover crops and the occasional field under pasture for cattle. But the dominant feature by far in the land was bare soil, some of which has had shoots of corn poking through. One recurring feature: large gashes that follow contours in farm fields, formed by water runoff during heavy rains, bearing soil rapidly away and dispersing it into ditches and streams, Cruse said. These are known as “ephemeral gullies,” because when one forms in the spring, farmers typically push fresh soil onto it to cover it over—leaving them prone to forming again the next year. They’re essentially pipelines, periodically filled by farmers, that remove precious topsoil from prime farmland. Here’s an example:

Heavy rains on bare slopes also cause erosion—eventually, to the point where all the prime black topsoil is washed away and all that’s left minimally fertile subsoil. Cruse taught me to look to for gradations in the land where you see black ground fade as you look up slope. Here’s an example:

In fields like that, farmers tend to achieve much lower yields in the brown patches than they do in the black, Cruse says. That’s because the black dirt is agricultural gold—it holds more plant-feeding nutrients as well as water. Soil’s ability to trap water is crucial during July and August droughts and heat waves, which are also expected to be more frequent as the climate warms.

Cruse and his team at the Daily Erosion Project estimate that on average, Iowa’s landscape is losing soil at an average annual rate of about 5.4 tons per year. That estimate is low, he says, because the team is still working on an accurate estimate for ephemeral-gully erosion, and don’t currently count it in their calculations. The best guess, based on international research, is that gullies carry way on average an additional 3 tons per acre of soil annually. Soil naturally replenishes at about 0.5 tons per acre per year. Add it up, and Iowa is losing soil at a rate about 16 times faster than it can be replenished.

Iowa is losing soil at a rate about 16 times faster than it can be replenished.

That’s bad news, because eroded soils lose their ability to absorb water, leaving more to run-off and creating more ephemeral gullies and floods in volatile springs. As soil moves from fields into streams, it pollutes water with fertilizers, contributing to a web of water-quality crises that stretch from Lake Erie to the Gulf of Mexico, where much of the midwest’s runoff ends up. Eroded soils also hold less water, leaving them vulnerable to extreme droughts like the one that caused corn yields to plunge in 2012.

I asked Rick about a technology fix: couldn’t, say, gene-edited crops engineered to shrug off drought bail us out? He chuckled. “Formula One is a great technology, and when you put it on the Indianapolis Speedway it does marvelous things,” he said. “But on a dirt road behind the house, in a pasture? Same technology, but it just doesn’t perform.”

“You can’t make something from nothing,” he said. Food ultimately draws its nutrients from the soil, and degraded soils produce crops with lower levels of protein and other nutrients. The kind of technology that can make a difference, he said, are practices that hold soil in place and build up its carbon content.

Most farmers in the area focus on corn and soybeans. But because those are planted in the spring and harvested in late summer and fall, the ground stays bare—and more vulnerable to erosion—in the winter. So some growers are beginning to see the magic of sowing “cover crops“—plants that stay in the ground over winter, holding their soil when hard rains come in the spring. But while cover-crop plantings have risen in recent years, they remain very much the exception: They blanketed fewer than 4 percent of Iowa’s acres over the winter of 2017-’18.

Tom Frantzen includes rye in his crop rotation at his farm in northeast Iowa, keeping some of his fields covered all winter and spring. When heavy spring rains lashed the farm this year, the rye buffered the soil from the impact of rain drops. The live roots, plunging deep into the ground, provided an extra level of protection from erosion. “I’m 67 years old, and sick of what the country looks like,” Frantzen told me. “I think this crop can change it.”