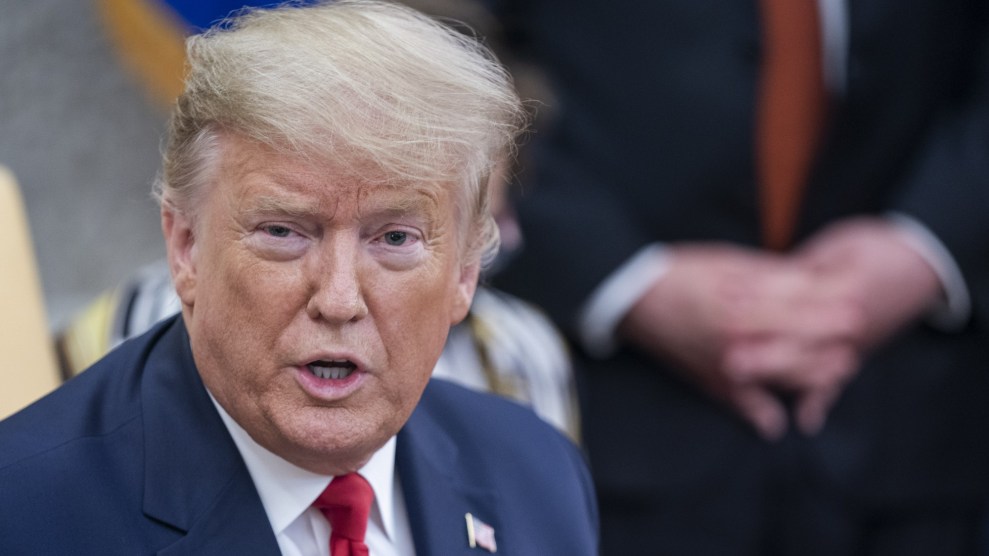 Donald Trump faulted the prosecution of Roger Stone during a Feb. 12, 2020 meeting with Ecuador's President.Jim Loscalzo/CNP via ZUMA Wire

In late 2018, President Trump told special counsel Robert Mueller he had no recollection of talking to his longtime adviser Roger Stone or other campaign aides about WikiLeaks’ plans to release Democratic emails stolen by Russian intelligence in 2016. Trump was probably lying, testimony at Stone’s October trial showed. And on Friday, previously redacted sections of Mueller’s report revealed Mueller suspected that Trump’s answers were in fact false, and that Trump lied to hide his involvement with Stone’s efforts.

Though most of Mueller’s findings came out more than a year ago, these revelations are critical information right now. Trump is apparently considering pardoning Stone, who is scheduled to start serving a 40-month prison sentence on June 30. And the newly unredacted portions of the special counsel’s report suggest why. It’s not because Stone has been unfairly prosecuted, as Trump asserts; it’s because Stone has information about Trump’s conduct in 2016 that the president doesn’t want Stone to reveal.

Stone’s trial last fall included testimony from Rick Gates, a former top campaign aide. Gates indicated that during the 2016 campaign, he watched as Trump spoke by phone with Stone, who shared supposedly inside information from WikiLeaks on its plans to release the Democratic emails stolen by Russian hackers. Trump also instructed senior campaign aides to stay in touch with Stone about WikiLeaks, according to additional testimony at the trial, which resulted in Stone’s conviction for making false statements to Congress, obstructing a congressional inquiry, and tampering with a witness.

This doesn’t square with Trump’s written answers to questions from Mueller. In those responses, submitted in November 2018 after the president refused to sit for an interview with the special counsel, Trump said he did “not recall discussing WikiLeaks” with Stone or “being aware of Mr. Stone having discussed WikiLeaks with individuals associated with my campaign.” Trump asserted that he had “no recollection of the specifics of any conversations [he] had with Mr. Stone between June 1, 2016 and November 8, 2016.” But anyone who recalls Trump’s extensive references in October 2016 to WikiLeaks’ disclosures, not to mention the regular boasts about his powers of recollection, will have a hard time believing that Trump had no memory of Stone informing him of WikiLeaks’ plans.

Now we know that skeptics included prosecutors in the special counsel’s office. On Friday night, the Justice Department, acting only due to a Freedom of Information Act lawsuit from BuzzFeed News and the nonprofit Electronic Privacy Information Center, released a version of Mueller’s report that included new information about Stone. (This information was initially redacted because Stone had yet to face trial.)

In the stilted and indirect language that typifies the Mueller report, the new sections suggest the special counsel suspected that Trump was full of it in his answers about Stone:

By late November 2018, the President had provided written answers to the Special Counsel’s Office in which the President said he did not recall ‘the specifics of any call [he] had’ with Stone during the campaign period and did not recall discussing WikiLeaks with Stone. Witnesses have stated, however, that candidate Trump discussed WikiLeaks with Stone, that Trump knew that [former Campaign Chairman Paul] Manafort and Gates had asked Stone to find out what other damaging information about Clinton WikiLeaks possessed, and that Stone’s claimed connection to WikiLeaks was common knowledge within the Campaign. It is possible that, by the time the President submitted his written answers two years after the relevant events had occurred, he no longer had clear recollections of his discussions with Stone or his knowledge of Stone’s asserted communications with WikiLeaks. But the President’s conduct could also be viewed as reflecting his awareness that Stone could provide evidence that would run counter to the President’s denials and would link the President to Stone’s efforts to reach out to WikiLeaks.

Translation: Trump probably lied. And he likely lied to hide conduct he knew would look terrible. As the report notes elsewhere, Mueller had evidence that “Trump was aware that Roger Stone was pursuing information about hacked documents from WikiLeaks at a time when public reports stated that Russian intelligence officials were behind the hacks, and that Trump privately sought information about future WikiLeaks releases.”

Another newly revealed portion of Mueller’s report indicates prosecutors believed there was likely some effort between Trump and Stone to align their stories. The report flags comments that Stone made on Fox News on the evening following his January 25, 2019 arrest: “When asked if he had spoken to the President about the allegation that he had lied to Congress, Stone said, ‘I have not’ and added, ‘When the President answered the written interrogatories, he correctly and honestly said Roger Stone and I never discussed this. And we never did.'”

Stone also made public statements before his arrest vowing not to cooperate against Trump. The president responded, praising Stone as “brave” and having “guts.” The new sections of Mueller’s report make an obvious point: “These statements, as well as those complimenting Stone and Manafort while disparaging [Trump’s former personal attorney] Michael Cohen once Cohen chose to cooperate, support the inference that the President intended to communicate a message that witnesses could be rewarded for refusing to provide testimony adverse to the President and disparaged if they chose to cooperate.”

The special counsel analyzed whether Trump’s conduct toward potential witnesses against him, including Stone, amounted to obstruction of justice. Due to a Justice Department policy that bars indicting a sitting president, Mueller stopped short of explicitly alleging obstruction. But now we know that the report does lay out evidence that Trump’s actions toward Stone met each of three elements required to charge obstruction: an obstructive act, a nexus with an official proceeding, and corrupt intent.

To summarize this long-running saga of presidential misconduct: Mueller suspected Trump lied to hide his knowledge of Stone’s interactions with WikiLeaks and involvement in scheming related to emails hacked by Russia. Mueller also laid out the case that Trump obstructed justice to ensure Stone did not reveal this information, in part by dangling a pardon. Now Trump, at least according to a tweet he issued on June 4, is considering pardoning Stone before he sets foot in prison. That is brazen. If Trump does pardon Stone, it’s hard to imagine a president more overtly abusing his power to protect himself.