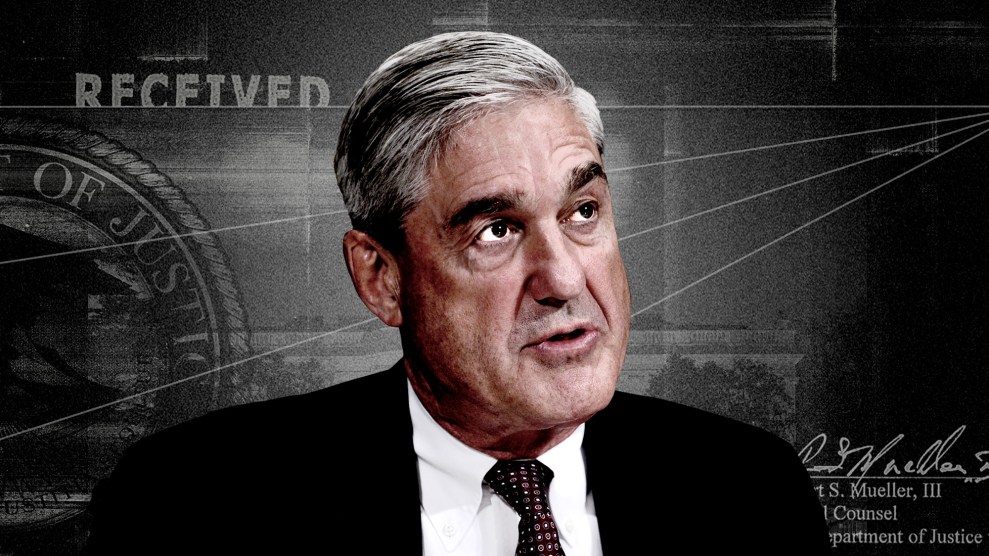 Special counsel Robert Mueller decided it would not be appropriate for him to determine whether President Donald Trump had committed the crime of obstructing justice through his actions that threatened to derail Mueller’s investigation. But Mueller specifically left open the possibility for Congress to make that determination—concluding in his report that Congress has the power to continue its own investigation and consider the facts laid out in his report.

“With respect to whether the President can be found to have obstructed justice by exercising his powers under Article II of the Constitution, we concluded that Congress has authority to prohibit a President’s corrupt use of his authority in order to protect the integrity of the administration of justice,” the redacted report, released Thursday, states.

The report continues: “The separation-of-powers doctrine authorizes Congress to protect official proceedings, including those of courts and grand juries, from corrupt, obstructive acts regardless of their source…The conclusion that Congress may apply the obstruction laws to the President’s corrupt exercise of the powers of office accords with our constitutional system of checks and balances and the principle that no person is above the law.”

Mueller is not going so far as to call for impeachment proceedings. But he is stating that Congress has the authority to determine whether Trump’s activities constitute a violation of the Constitution.

This is in tension with Attorney General William Barr’s characterization of the report in a press conference Thursday morning before the Justice Department released a redacted version of it. Barr repeated his conclusion, stated last month in a letter to Congress on the report’s findings, that “the evidence developed by the Special Counsel is not sufficient to establish that the President committed an obstruction-of-justice offense.” And in an exchange with a reporter, he dismissed the idea that Congress should be the arbiter of Trump’s guilt.

Reporter: “Did the special counsel indicate that he wanted you to make the decision or that it should be left for Congress? And also, how do you respond to criticism you’re receiving from congressional Democrats that you’re acting more as an attorney for the president rather than as the chief law enforcement officer?”

Barr: “Well, special counsel Mueller did not indicate that his purpose was to leave the decision to Congress. I hope that was not his view, since we don’t convene grand juries and conduct criminal investigations for that purpose. He did not—I didn’t talk to him directly about the fact that we were making the decision, but I am told that his reaction to that was that it was my prerogative as attorney general to make that decision.” [Emphasis added]

Moreover, Barr implied that the only important conclusion from the report would be whether the president committed a crime that is prosecutable by the Justice Department, saying that the Justice Department does not conduct criminal investigations just to refer them to Congress. But in this case, that is effectively what Mueller did. The report goes to lengths to explain that due to Justice Department guidance and ambiguity in the law, Mueller did not feel comfortable indicting a sitting president, and so he instead wielded the powers of his appointment, including convening a grand jury, for a purpose other than to determine whether Trump committed a crime.

But Congress, the report makes clear, indisputably has the authority to address the matter. And regardless of Barr’s spin, Democratic leaders in the House of Representatives have left no doubt that they will continue to do so.