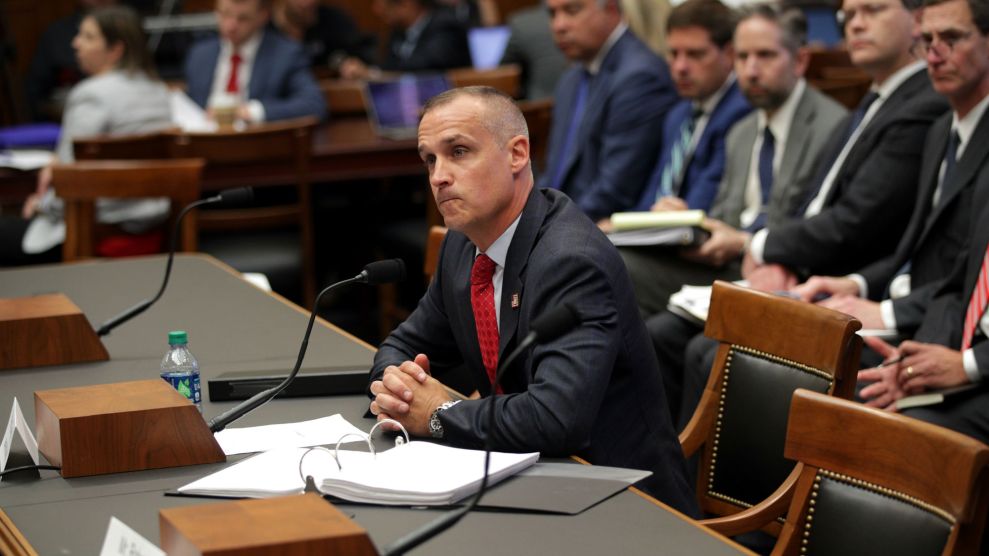 For a lot of people, testifying before Congress under subpoena about involvement in the president’s alleged obstruction of justice would complicate a nascent Senate campaign. But Corey Lewandowski treated his testimony on Tuesday before the House Judiciary Committee as an opportunity to tout his subservience to the Trump White House and endear himself to the president’s fans in New Hampshire. Trump’s former campaign manager used his appearance as a platform to bolster his pro-Trump credentials by attacking Democrats and denying that Trump obstructed justice when he tasked Lewandowski with pressuring former Attorney General Jeff Sessions to rollback Robert Mueller’s investigation.

“This fake Russian collusion narrative is the greatest crime committed against the American people in this generation or maybe any other,” Lewandowski declared during the hearing. Invited by Rep. Matt Gaetz (R-Fla.) to opine on Democrats’ motivation, Lewandowksi stated: “Democrats hate this president more than they love their country.”

In a tweet issued during a recess in the hearing, Lewandowski announced the launch of a website and super PAC connected to his potential Senate primary bid in New Hampshire.

The ex-Trump aide is considering a run in the GOP Senate primary in New Hampshire in hopes of taking on Democratic Sen. Jeanne Shaheen next year. Trump has essentially endorsed his former aide’s bid, and their exchange of favors continued online even during Tuesday’s hearing.

“Such a beautiful Opening Statement by Corey Lewandowski!” Trump tweeted after Lewandowski used his opening remarks to laud Trump’s 2016 campaign as a “historically and unprecedented political juggernaut” and argue that criticism of Trump campaign contacts with Russia amounted to a “false narrative for the purpose of purpose of undermining the legitimacy” of Trump’s election.

Lewandowski was fired from Trump’s campaign in June 2016. But he has stayed in his former bosses’ orbit, consulting with him privately, and praising him in obsequious cable news hits and books. Since Trump took office, Lewandowski has attempted to monetize his access to Trump while insisting that he is not a lobbyist. He reportedly offered to arrange a meeting with Trump for Azerbaijan’s president while seeking business with that country’s government. He seemingly sought clients in Albania and Serbia. This year, he became an advisor to a lobbying firm based in a Capitol Hill rowhouse in which he lives, and with which he previously, adamantly, denied any involvement. While touting his potential Senate campaign, he has refused to disclose details of his “private business.”

Lewandowski testified Tuesday about his role in 2017 as intermediary between Trump and Sessions. Enraged by Sessions’ decision to recuse himself from the Trump-Russia investigation, Trump wanted the attorney general to reverse that decision and to fire Mueller, or at least restrict, his probe to avoid any scrutiny of Trump’s 2016 campaign.

In June, 2017, Trump summoned Lewandowski to the Oval Office and, though Lewandowski had no formal White House role, the president gave him a statement that he wanted passed along for Sessions to deliver. Trump’s proposed remarks would have had Sessions publicly state that Mueller’s probe “is very unfair” and that Sessions was therefore ordering Mueller to investigate “election meddling for future elections so that nothing can happen in future elections” while dropping the probe into the Trump campaign.

Lewandowski sought to meet secretly with Sessions, but the AG rebuffed him. Lewandowski then turned to former Sessions aide Rick Dearborn, a White House staffer, to deliver the message instead. Dearborn, who didn’t deliver it either, has refused to appear before the committee, on instructions from White House lawyers. In another meeting with Trump, on July 19, the president asked Lewandowski to tell Sessions he was fired if he refused to meet.

Lewandowski never delivered that threat. “Mr. Lewandowski was nervous about this demand from his former boss—as he should have been,” Judiciary Committee Chairman Jerrold Nadler (D-N.Y.) said. “It raised serious questions about criminal conduct.”

Mueller, though he did not formally accuse Trump of obstructing justice, wrote that Trump’s instructions to Lewandowski’s met all the criteria of obstruction of justice. Mueller has indicated he did not charge Trump with obstruction because of a Justice Department policy prohibiting indicting a sitting president.

In an unusual claim made in a letter sent to the committee on Monday, the White House Counsel’s office said that Lewandowski’s conversations with the president “are protected from disclosure by…Executive Branch confidentiality interests” and argued he can only testify about information already in the Mueller report. Lewandowski repeatedly cited those instructions to deflect questions on Tuesday, though no court has ever ruled a private citizen is protected by executive privilege.

Democrats appeared deeply frustrated by Lewandowski’s evasion. “This is clearly part of the president’s effort to cover up his actions,” Nadler said.