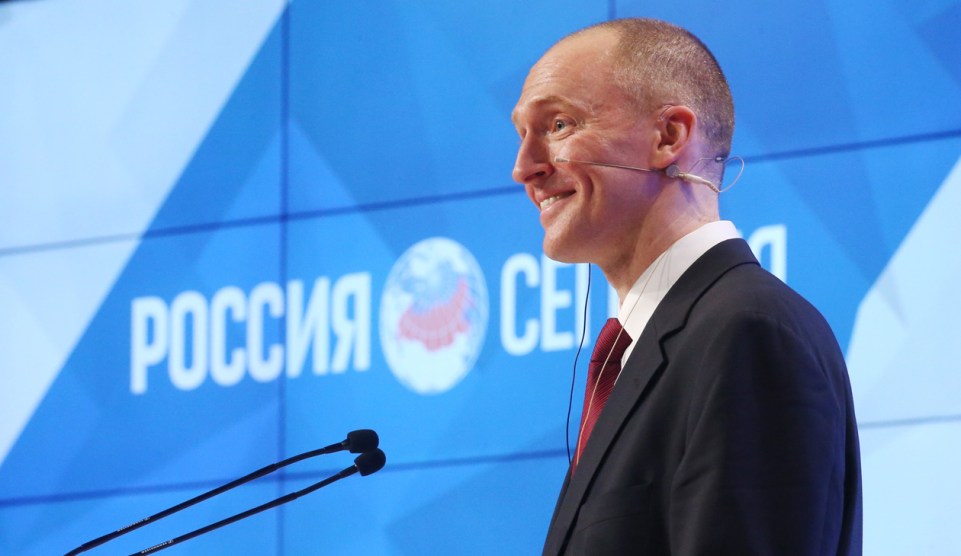 Trump campaign advisor Carter Page during a trip to Moscow in December 2016.Korotayev Artyom/TASS via ZUMA

Carter Page, the idiot cousin of the Trump campaign, went on a trip to Russia last June. It was, he insists, a personal visit, not something done on behalf of the campaign. And he didn’t talk to any Russian officials anyway.

But guess what? Email exchanges suggest that, in fact, he did meet with Russian officials. And he reported back to the campaign about them. And he got permission from the campaign to take the trip. And he offered to step aside if Trump himself wanted to go in his place.

The Trump campaign, of course, says that Page—who was part of Trump’s five-person foreign policy team—was just some random volunteer guy that nobody ever even talked to. And Corey Lewandowski says that as Trump’s campaign manager at the time, he never gave Page permission for anything. No how, no way. Except, um, for those pesky emails:

During an interview on Fox News on Tuesday evening, former Trump campaign manager Corey Lewandowski claimed the distraction created by Father’s Day resulted in him being unable to remember an email sent to him by former campaign foreign policy adviser Carter Page. In the email, Page sought and ultimately received permission from Lewandowski to travel to Moscow.

“You have to remember, in the context of the campaign world––now, my memory has been refreshed, but to be clear, from what I understand and what I recall, that email was sent on June 19th of 2016, so about 18 months ago,” Lewandowski said. “It also happened to be Father’s Day on a Sunday, and it also happened to be the day prior to me being terminated from the campaign, so with all due respect, there were many other things on my mind that day other than trying to understand why a volunteer was telling me he may or may not be traveling outside the country.”

I really wonder what the story is with Trump and Russia. The full-blown collusion theory still seems pretty unlikely to me.¹ But obviously there was something. Just for starters, Trump wouldn’t be so obviously panicked by the whole thing if nothing untoward happened. And every day brings new evidence of something that some Trumpkin “forgot.” This whole thing is weird as hell.

¹Partly this is because I don’t think even Trump and his team could be so dumb. The evidence is clear that they’re pretty dumb, but are they that dumb? I dunno. Nixon was, and he was actually a pretty smart guy.