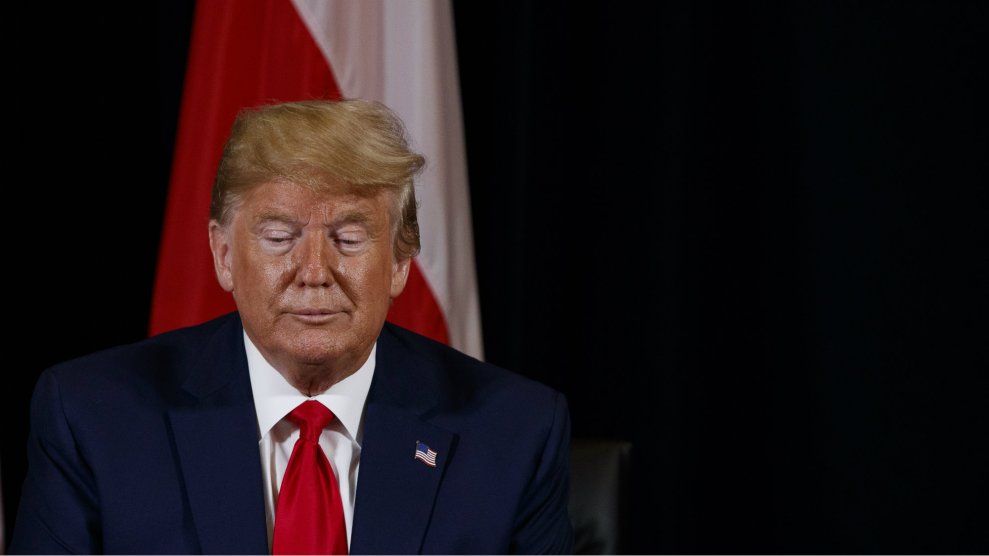 But the process for impeaching a president is neither quick nor easy. And it’s potentially risky—Pelosi has agonized over what would happen if the House didn’t have enough votes to start an impeachment inquiry—which is why the speaker and other House leaders have refused to move forward with impeachment proceedings despite a growing consensus among the House Democratic Caucus. Pelosi’s statement on Tuesday suggests we’ve reached a tipping point on the issue for House Democrats.

The impeachment of a president has only happened twice—to Andrew Johnson in the aftermath of the Civil War, and Bill Clinton for lying about and trying to cover up his sexual relationship with White House intern Monica Lewinsky. (Articles of impeachment were brought up against Richard Nixon in 1974 in response to the Watergate scandal, but he resigned before he was formally impeached.)

And with the 2020 election not far away, we are wading into relatively uncharted territory. So what happens next? What would the impeachment process look like? What would it take to actually have Trump removed from office? And what does this mean for all the ongoing House investigations into the many Trump scandals?

To get a better sense of what could be in store, I spoke with Michael Conway, an attorney who served as counsel for the US House Judiciary Committee in the impeachment inquiry of Nixon in 1974.

What is needed for the impeachment inquiry to begin? Will there be a vote?

Traditionally, it’s gone to the House Judiciary Committee, but there’s no absolute requirement to do that. The House Judiciary Committee has done a little bit of this. For example, in Nixon’s case, the Committee set up a brand new independent inquiry staff, headed by John Doar as special counsel—that’s the staff I served on—instead of using their already pre-existing staff members. And part of that was because the Judiciary Committee has a lot of responsibilities in addition to impeachment. And so setting aside a group whose sole function was to investigate the grounds for impeachment was what happened there.

And in that case, the Committee got reports from our staff over time, but essentially the staff did an investigation—in large part based upon what the Senate Committee had done before and what the Grand Jury had sent us—and then presented the evidence to the Committee.

And how did the House decide on the articles of impeachment based on the reports you sent the Committee? How would it work for this impeachment inquiry?

The Committee heard a few witnesses, but not a tremendous number and not in public sessions, and then the Committee debated the articles of impeachment, which were actually rewritten once the evidence came in. In other words, every article that is authored by congressmen right now don’t have to be the articles voted on, the articles voted on can be conformed to whatever the evidence happens to be. So that would be the process that has worked before. Now, there’s no requirement to follow that process, but that’s the template.

Listen to Mother Jones Washington Bureau Chief David Corn explain what happens next, in this special impeachment edition of the Mother Jones Podcast:

What additional powers do House Democrats get by declaring a formal inquiry? Would they finally get access to some of those long-sought after documents, like Trump’s tax returns? Or witnesses who haven’t agreed to testify on obstruction, or other inquiries?

Yes, to a larger extent. A witness can always plead the Fifth Amendment, but for political reasons people don’t always want to do that. For example, Grand Jury material is typically secret, but there are few exceptions to when the court can release them. In the Nixon impeachment, the Grand Jury sent us the report and sent us some White House tapes that they had obtained. The judge, [former District judge John] Sirica, ruled that he had the authority to do that. That went up on appeal to the DC Circuit Court of Appeals. And this is a critical point: It ruled that he had the authority to do that.

In April of this year, the DC Circuit, in a 2-1 vote where a historian was trying to obtain Grand Jury material, ruled that the court lacked the authority to release the Grand Jury material. And when the dissenting judge said, ‘Well, what about the Haldeman Case?’ He said, ‘Well that’s an impeachment.’ And so, the fact that it’s a formal impeachment would very much strengthen the Committee to get Grand Jury material, the same thing for compelling witnesses to testify overruling executive privilege and so forth. So, that would be an important legal step forward to strengthen the Committee’s ability to get information.

That could take a long time, though, right? And the Democrats seem to want to move quickly on this.

It takes a long time for the court, yeah. For example, the hearing on the Grand Jury release isn’t scheduled until Halloween. So I don’t think there would be a ruling on that—even if the Judge had it all certain, even if the Judge ruled on the actual day of the hearing—you’re talking about five or six weeks from now. But Congress has the ability to hold people in contempt. They don’t have to go to court. Congress itself has the power to compel, and if they’re stonewalled by the White House that actually is considered an interference with the investigation, which is in itself an impeachable offense. When President Nixon refused to comply with subpoenas and so forth, he was obstructing an impeachment investigation, which then becomes an impeachable offense. And it’s also a criminal offense.

There are already investigations into Trump’s obstruction of justice, so would those hearings be rolled into an impeachment investigation?

It could be. I’ll give you a historical example: In Nixon’s case, there were five articles of impeachment that were presented to the Committee for vote. Three were adopted and two were rejected. One of the rejected ones was about illegal bombing of Cambodia during the Vietnam War. The other one was whether Nixon violated the emoluments clause and committed tax fraud. But the problem that the Committees have from a public opinion point of view is being sufficiently focused so that it doesn’t look like it’s a cafeteria-style impeachment; one of these and one of those. They need to focus and the Ukraine thing may be what becomes that focus.

Even with the House officially opening an impeachment inquiry and, let’s say the House ends up voting for impeachment, would this all be moot if Mitch McConnell refused to hold a trial?

He can’t refuse. If the House voted impeachment and set the resolutions, the Senate is supposed to set aside all other business and consider the impeachment. That’s what happened in Clinton’s case. Of course in Nixon’s case, he resigned before even the full House vote, before the Committee voted. Now, they can certainly vote down the impeachment, but there is no ability like there was with the judicial nominations to simply not call it up for consideration. It has to be called up.

If the Senate votes down impeachment, then it’s dead in the water?

Yes. But there have been lots of impeachments where the Senate has acquitted people—Bill Clinton is the example that comes to mind. Historically, the Secretary of War back in the 1870s was impeached. He resigned and then the Senate had the trial. They ended up acquitting him, but they had the impeachment. And, of course, the fact that he’s not actually removed from office doesn’t mean that the public isn’t then better informed about what the charges were presented against them. Same thing with Bill Clinton. Now, Bill Clinton was not convicted, but certainly the public got a better educational message about what was alleged to have happened. So, there’s a value in educating the public even if the Senate doesn’t vote to remove him. An impeachment is a charge, the trial is the center, the trial itself would be must-see TV, that’s for sure.

What would Chief Justice John Roberts’ role actually be when he’s presiding over an impeachment trial? Is it largely ceremonial, or does he make actual decisions that matter?

He would preside over the Senate trial, but when Chief Justice Rehnquist presided over the Clinton trial, he viewed himself as being largely ceremonial. For example, in a trial, a judge can rule whether evidence is admissible or not. But in the Senate, if there were some objection to admissibility of evidence, the Senate would vote on the objection. So, the judge in an impeachment trial doesn’t have the normal authority that a judge has in presiding over a regular trial and making rulings. The judge is simply the person who’s presiding over the proceeding but doesn’t really have the authority to make rulings in the proceedings.

What is the Department of Justice’s role in impeachment? What will William Barr do?

Nothing. They have no role. An impeachment is strictly a Congressional prerogative. If there’s a trial in the Senate, the House then elects the prosecutors, who could be—and typically have been—also House members, but they can be assisted by attorneys representing them. In the Nixon impeachment inquiry, and also in conformity with the rules that were adopted recently by the House Judiciary Committee, the president’s personal lawyer can participate and defend. In our circumstance, James St. Clair was Nixon’s personal lawyer, he was able to present evidence to the Committee, make arguments to the Judiciary Committee and so forth. So, it’s not as if the president is defenseless, but the Justice Department has no role whatsoever.