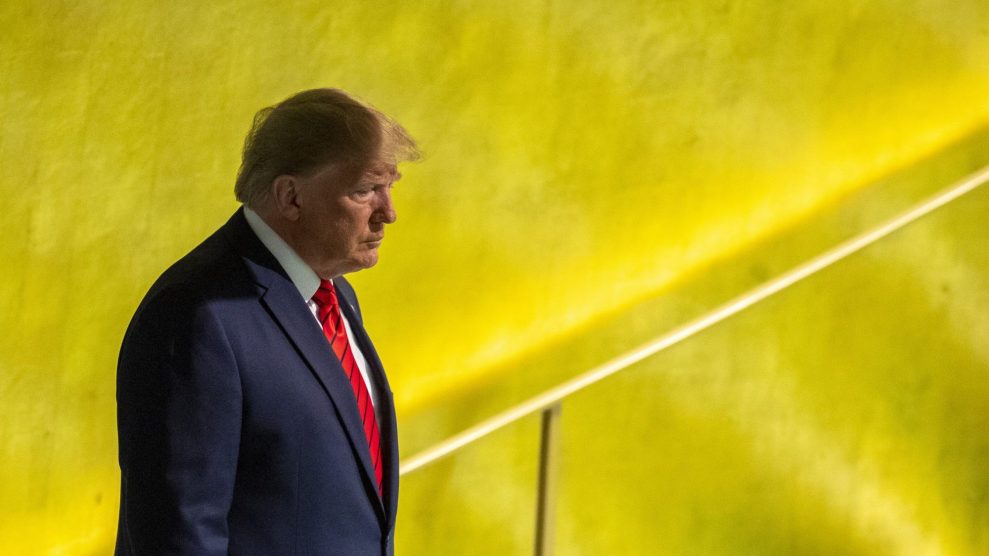 The dam seems to have broken—Nancy Pelosi has announced a formal impeachment inquiry into President Donald Trump over his efforts to strongarm Ukrainian President Volodymyr Zelensky into investigating Democratic presidential frontrunner Joe Biden.

In the last day, we’ve learned that Trump reportedly froze $391 million in military aid for Ukraine, suggesting the possibility of a quid pro quo that would give the president an edge over a potential competitor in the upcoming election. Trump also admitted to discussing Biden on a phone call with Zelensky. The scandal was set in motion by a whistleblower complaint, categorized by the intelligence community’s inspector general as being “of urgent concern,” which the White House has refused to turn over to Congress.

Here’s the latest. We’ll keep updating as the news unfolds.

Surrounded by a flurry of reporters, the New York Democrat was asked if the caucus had been too slow to move on impeachment. Ocasio-Cortez didn’t take the bait: “We can’t ask ourselves about whether we move too slow or too quickly. We have to ask ourselves what we’re doing right now.”

Mere days after the Democratic firebrand called out her own party for abetting the president’s continued behavior, Ocasio-Cortez lent her support to the Speaker’s decision: “I think we have to hold this president accountable and we have to protect our democracy.”

.@AOC: "What we're seeing with these developments from Ukraine are extremely serious…The president has committed several impeachable offenses. What he has admitted to is already impeachable." https://t.co/7ZaZ7ns4K3 pic.twitter.com/ALMDoPBhRg

6:57 p.m. ET: House Minority Leader Kevin McCarthy responded to Pelosi’s announcement. “This election is over,” he said. “I realize 2016 did not turn out the way Speaker Pelosi wanted it to happen. But she cannot change the laws of this Congress. She cannot unilaterally decide we’re in an impeachment inquiry.” He ended by saying, “It’s time to put the public before politics.” Sure!

House Minority Leader Kevin McCarthy on Speaker Pelosi opening an impeachment inquiry into Pres. Trump: "This election is over. I realize 2016 did not turn out the way Speaker Pelosi wanted it to happen but she cannot change the laws of this Congress." https://t.co/QXFmkJxheN pic.twitter.com/5IzbxeLXJG

Secretary of State Pompeo recieved permission from Ukraine Government to release the transcript of the telephone call I had with their President. They don’t know either what the big deal is. A total Witch Hunt Scam by the Democrats!

5:20 p.m. ET: Trump has, predictably, begun melting down on Twitter.

Pelosi, Nadler, Schiff and, of course, Maxine Waters! Can you believe this?

They never even saw the transcript of the call. A total Witch Hunt!

5:08 p.m. ET: House Speaker Nancy Pelosi officially announces an impeachment inquiry. “The Trump administration’s actions undermine our national security and intelligence…the president must be held accountable. No one is above the law.”

BREAKING: @SpeakerPelosi just launched an impeachment probe against President Donald Trump. “The president must be held accountable. No one is above the law.” https://t.co/2JSbUO6Rsm pic.twitter.com/1X6Ufkv7UU

House Speaker Nancy Pelosi on Tuesday announced plans to launch formal impeachment proceedings against President Donald Trump. In recent days, a growing number of Democrats have argued that Trump’s efforts to pressure Ukrainian leaders to investigate former Vice President Joe Biden and his son could be grounds for removing the president from office.

“This is a violation of his constitutional responsibility,” Pelosi said in televised remarks on Tuesday evening, accusing Trump of betraying his oath of office.

Pelosi’s announcement, which came after she met with Democratic committee chairs and then with the full House Democratic Caucus, reflects a dramatic political shift resulting from Trump’s recent actions. Pelosi has previously opposed calls for the House to move toward impeaching Trump, arguing that it could backfire politically and harm efforts to defeat Trump next year.

But Trump’s apparently brazen effort to use US power for personal political gain has changed the equation. An impeachment trial has little hope of succeeding in the Republican-controlled Senate, but Democrats say Trump’s conduct leaves them no choice. The Trump administration, backed by the Justice Department, has also enraged Democrats by refusing to share with Congress a whistleblower complaint believed to relate at least in part to Trump’s pressure on Ukraine, despite a law that requires them to turn over such a complaint to the House and Senate intelligence committees. “This is a violation of law,” Pelosi said.

4:47 p.m. ET: Our own Kara Voght has more on the intraparty maneuvering over impeachment proceedings. While Nancy Pelosi seems to have mollified anxious progressives who wanted the impeachment inquiry to remain under the purview of the House Judiciary Committee, chaired by Rep. Jerry Nadler (D-N.Y.), there are apparently lingering concerns among House leadership about Nadler and his staff:

An aide to a different member of House leadership said the concern wasn’t about the progressives on the Judiciary Committee but instead reflected a lack of confidence in Nadler’s staff to orchestrate a successful impeachment inquiry. Both aides cited the recent Judiciary hearings involving special counsel Robert Mueller and former Trump campaign manager Corey Lewandowski as failed attempts to clearly convey allegations against Trump. “We haven’t been able to create a clear message about what we’re doing,” the second aide said. “People don’t have faith in being able to course-correct right now. We need to be able to show the American people that we can take this seriously by holding Trump accountable for his actions.”

4:36 p.m. ET: The pressure is mounting for Trump to make the whistleblower’s complaint public. The Senate unanimously passed a non-binding resolution calling on Trump to release it, Sen. Chris Murphy (D-Conn.) tweeted.

It passed by unanimous consent. Meaning every Senator supported it.

4:26 p.m. ET: Why impeach? One screamingly obvious reason is that it corners the GOP into defending an unpopular president. This is an unpleasant position to be in, particularly for a swing-state Republican. Here’s Sen. Cory Gardner, the vulnerable Colorado Republican, trying very much to find a desk to dive under:

Gardner on Ukraine call: “going to get to the bottom of this. And that’s the same answer you’re going to get from me. I’ve seen what happens here when people get ahead of themselves. This is a serious issue and I’m not going to get out in front of the facts I simply don’t have”

3:45 p.m. ET: Meanwhile, the Senate Intelligence Committee has opened its own inquiry into the Ukraine matter. Yahoo News has a letter from the committee—signed by Sen. Richard Burr (R-NC) and Sen. Mark Warner (D-Va.)—to Andrew Bakaj, the lawyer who represents the whistleblower. “[W]e are writing to request that you make your client available for a closed bipartisan interview with Committee counsel no later than Friday, September 27, 2019, in a mutually agreeable secure location,” it reads.

The letter seems to have perked up a lot of people who are bleeding from the teeth for a Goldwater–Nixon moment. But remember that Burr was a national security adviser to Trump’s campaign in 2016, and as chair of the Senate intel panel, he has not exactly covered himself in glory.

3:36 p.m. ET: A little impeachment brings everyone together:

Asked whether Pelosi's reluctant approach to impeachment has been vindicated, or whether they still have a problem with her slow-walking the process to this point, the Congressional Progressive Caucus chairs decline to bash Pelosi.

Jayapal: "The point is, where are we at now?"

JOE BIDEN: "I can take the political attacks…[but] if we allow a POTUS to get away w/shredding the Constitution, that will last forever…if he continues to obstruct Congress & flout the law, Donald Trump will leave Congress in my view w/no choice but to initiate impeachment." pic.twitter.com/9VjomB0kpU

The Democrats know they have no chance of winning in 2020, so now they are crying, “Impeachment!”

There are now over 150 House Democrats who back Impeachment. We CANNOT let these hateful and baseless attacks go on any longer.

These Impeachment claims have nothing to do with the President – the Democrats thrive on silencing and intimidating his supporters, like YOU, David. They want to take YOUR VOTE away.

We won’t stand for this any longer, and neither should YOU. Which is why President Trump is launching the Official Impeachment Defense Task Force.

This task force will be made up of only President Trump’s most LOYAL supporters, the ones committed to fighting for him, re-electing him, and taking back the House.

House Democrats are holding a meeting at 4 PM EDT today to discuss their Impeachment plans and the President wants us to send him a list of every Patriot who stands with him before the meeting.

To make a statement: ALL DONATIONS WILL BE DOUBLE-MATCHED.

Please contribute $5 by 3:30 PM EDT to join our Official Impeachment Defense Task Force and get on the list of Patriots we send President Trump before the meeting.

3:08 p.m. ET: The New York Times and the Wall Street Journal back up the Washington Post’s reporting that Nancy Pelosi will announce a formal impeachment inquiry into Trump.

2:52 p.m. ET: Do you care what James Comey thinks about impeachment? Of course you don’t, but here he is anyway, sanctimony spreading across your computer screen like an oil slick: “I think the American people would be let off the hook if Donald Trump were impeached and removed from office.”

2:38 p.m. ET: “The quid pro quo is not essential to an impeachable offense,” says Nancy Pelosi, speaking at The Atlantic Festival. She also says Trump “has made lawlessness a virtue in this country.”

I am currently at the United Nations representing our Country, but have authorized the release tomorrow of the complete, fully declassified and unredacted transcript of my phone conversation with President Zelensky of Ukraine….

House Speaker Nancy Pelosi, who has so far resisted Democratic calls for impeachment, is considering setting up a select committee to investigate President Donald Trump’s interactions with Ukraine, according to several House sources