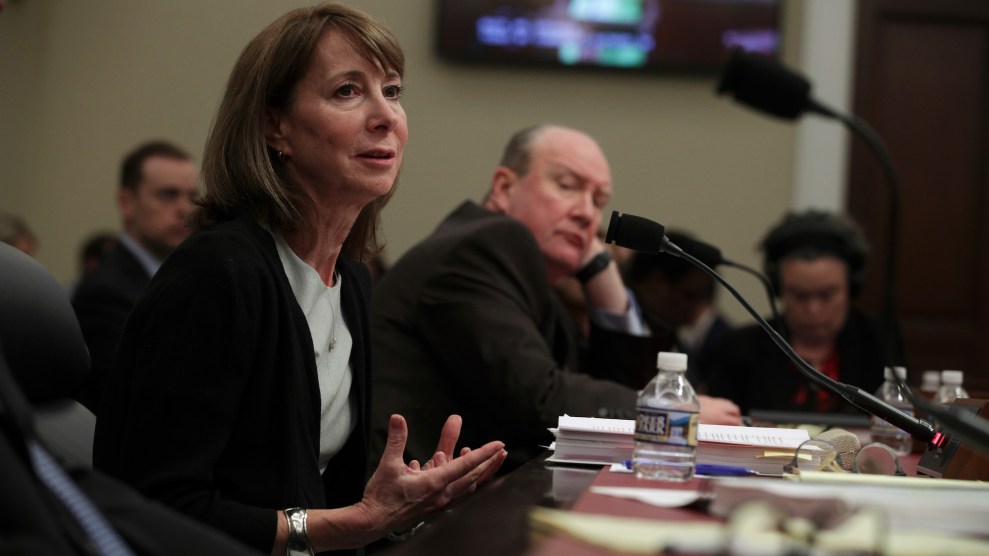 President Donald Trump and his campaign opened themselves up to blackmail and manipulation by the Russian government, former FBI counterintelligence officials testified Wednesday in a House Intelligence Committee hearing.

Robert Anderson and Stephanie Douglas—former senior FBI officials who both worked to combat espionage by Russia and other governments—also said that by agreeing to secret contacts with Russian officials and signaling an openness to the receive Moscow’s help in defeating Hillary Clinton, the Trump campaign gave the Kremlin a green light interfere in the 2016 election. “That is a tacit approval,” Douglas said.

“The blackmail starts when you say, ‘No.’”

Democrats used the hearing to highlight the danger created by contacts between Trump campaign officials and Russian emissaries. These included Trump’s secret pursuit during the presidential campaign of a lucrative deal to build a tower in Moscow; former Trump campaign aide George Papadopoulos’ contacts with a Maltese academic with ties to the Russian government (who told Papadopoulos, before it was public knowledge, that Russia had obtained thousands of emails damaging to Clinton and hoped to anonymously release them); the June 2016 Trump Tower meeting in which Donald Trump Jr., Jared Kushner and Trump campaign chairman Paul Manafort met with a Russian lawyer promising dirt on Clinton; and Manafort’s secret contacts with Konstantin Kilimnik, who the FBI suspected of having Russian intelligence ties.

Separately on Wednesday, Trump Jr. testified behind closed doors before the Senate Intelligence Committee, in an appearance that committee aides said was intended to allow him to address inaccurate statements he had made in previous congressional testimony. Trump Jr. told reporters on Wednesday that he had “nothing to correct.”

The House hearing was the latest in what Democrats said will be a series of open hearings related to special counsel Robert Mueller’s report on the Trump campaign’s contacts with Russia. The House Judiciary Committee on Monday also held a hearing on Mueller’s descriptions of potential obstruction of justice by Trump. That hearing drew mockery for featuring Watergate figure John Dean and other witnesses with no direct knowledge of the events described in Mueller’s report. And some Democrats suggested this week that their leaders are reacting too meekly to blanket stonewalling by the Trump’s administration of their oversight efforts. The House, these dissident Democrats said, should launch a formal impeachment inquiry into Trump’s actions.

Anderson and Douglas, who had both left the FBI for the private sector by the time the FBI investigated the Trump campaign’s contacts with Russia, described how the Russians might exploit those contacts, based on their experience. Speaking hypothetically, Anderson said that once an American official agreed to an improper meeting or request, the Russians would typically make more significant requests, using the secrecy of the initial interactions as leverage.

“The tasking usually starts off as almost incidental,” he said. “The blackmail starts when you say, ‘No.’”

Douglas said she believed that through Kilimnik, the Russians “tasked” Manafort by convincing him to share internal Trump campaign polling data. Rick Gates, who worked for Manafort for years at a political consulting business, told Mueller’s office that Manafort expected Kilimnik would share the polling with Oleg Deripaska, an aluminum magnate close to Russian President Vladimir Putin.

Douglas said that if Manafort had not been forced to quit the campaign (after his ties to a pro-Russian party in Ukraine were exposed), he would likely have done more for Russia.  “Manafort was not going to stop at polling data,” Douglas said.

In fact, according to Mueller’s report, Manafort did entertain requests to use his ties to Trump to take more significant pro-Russian steps. At the same August 2, 2016, meeting during which he shared polling data, Manafort and Kilimnik discussed a plan for addressing Russia’s 2014 invasion of Ukraine that Manafort later told Mueller amounted to a “backdoor” way for Russia to gain control of eastern Ukraine. Manafort continued to discuss this plan with Kilimnik after Trump’s election. “[B]oth men believed the plan would require candidate Trump’s assent to succeed,” the Mueller report said. There’s no evidence that Manafort ever presented the plan to Trump.

During the hearing, Republicans focused their questions on the origins of the Russia investigation, directing most of their inquiries to Andrew McCarthy, a National Review writer and former federal prosecutor who has criticized Mueller’s probe. But McCarthy broke at times with Republicans’ talking points. He said repeatedly he believed Trump officials should have reported Russian overtures to the FBI.