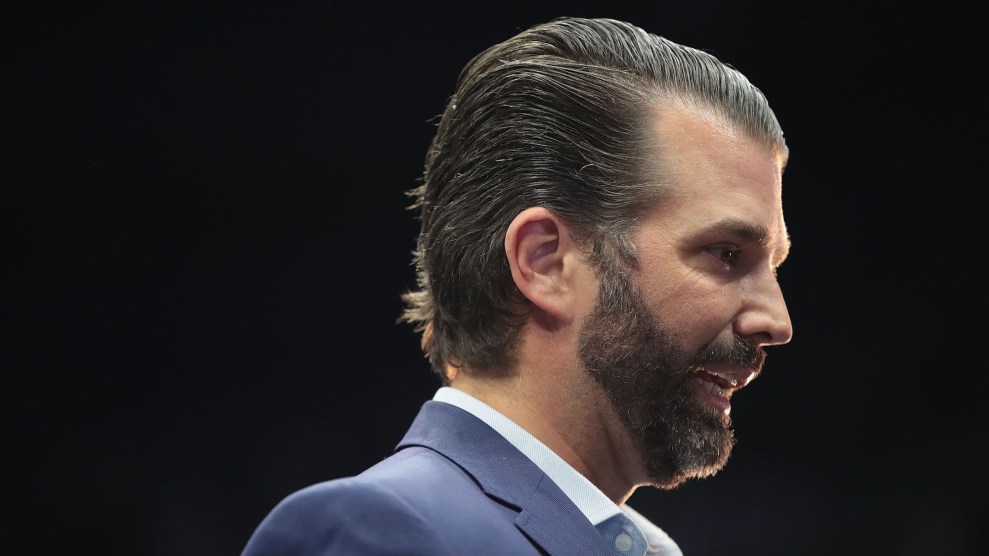 In 2017, Donald Trump Jr. told congressional investigators that in June 2016 he had informed just two people about his upcoming meeting with a Russian government emissary during which Trump Jr. hoped to obtain incriminating information about Hillary Clinton: his brother-in-law Jared Kushner and Trump campaign chair Paul Manafort. But special counsel Robert Mueller’s report revealed a different story, noting that the president’s eldest son boasted of his efforts during a meeting of campaign staff attended by his brother Eric and sister Ivanka, among others. This apparent contradiction—and concerns that Trump Jr. also was not forthright about his knowledge of the Trump Organization’s pursuit of a Trump tower in Moscow during the 2016 campaign—led the Senate Intelligence Committee to subpoena Trump’s eldest son, according to Senate sources.

These discrepancies in the testimony by Trump Jr., who appeared before three congressional committees in 2017, underscore that the Trump-Russia scandal continues to pose a threat to President Donald Trump, his family, and his associates, confounding efforts by Trump and his allies to shut down the controversy.

In a September 7, 2017, interview with staff of the Senate Judiciary Committee, Trump Jr. faced a slew of questions about his June 9, 2016, Trump Tower meeting with that Russian emissary. One issue was whom he had told about a June 3 email he received from Rob Goldstone, a publicist for Emin Agalarov, a Russian pop singer whose father, Aras Agalarov, was a real estate mogul with Kremlin ties and who was Trump’s partner in the 2013 Miss Universe pageant held in Moscow. A senior Russian prosecutor, Goldstone wrote Trump Jr.,  had “offered to provide the Trump campaign with some official documents and information that would incriminate Hillary and her dealings with Russia and would be very useful to your father” as “part of Russia and its government’s support for Mr. Trump.” Trump Jr. responded enthusiastically—“If it’s what you say I love it”—and agreed to meet with the Russian representative, lawyer Natalia Veselnitskaya. Manafort, then the Trump campaign chair, and Kushner, President Trump’s son-in-law and adviser, also attended the meeting.

Trump Jr. told the Judiciary Committee that he informed “only Jared Kushner and Paul Manafort” about Goldstone’s offer. And he stuck to that claim when a committee lawyer asked if there was anyone else. “No,” Trump Jr. said. “Not to my recollection.” Trump Jr. also said that he recalled telling Manafort and Kushner of the meeting only via email. “I sent them the email and asked if they could attend.”

The Judiciary Committee interview is public. Transcripts of Trump Jr.’s interviews with the House and Senate Intelligence committees, both in December 2017, have not been released. But a Senate source says that Trump Jr. also told the Senate Intelligence Committee that he had only alerted Kushner and Manafort about Goldstone’s offer before the meeting.

Mueller’s report, a redacted version of which was released last month, included a different account. It stated that Rick Gates, who was deputy Trump campaign manager, said in interviews with the special counsel’s office that before the sit-down with Veselnitskaya, “Trump Jr. announced at a regular morning meeting of senior campaign staff and Trump family members that he had a lead on negative information about the Clinton Foundation.” Gates said that Eric Trump, Hope Hicks, Manafort, Ivanka Trump, and Kushner also attended the meeting. Gates also recalled that Trump Jr. claimed the information came from a group in Kyrgyzstan, where Agalarov does business. According to Gates, Trump Jr.’s announcement sparked a discussion, with Manafort warning the group that “the meeting likely would not yield vital information and they should be careful.”

In February, Michael Cohen, President Trump’s former personal lawyer, testified before the House Oversight Committee that he overheard a conversation in which he believed Trump Jr. told his father about the meeting in advance. If that is true, it contradicts claims both the president and his son made to investigators.

The Senate Intelligence Committee is also scrutinizing Trump Jr.’s statements about Trump’s efforts during the 2016 campaign to develop a Trump tower in Moscow. As a candidate, Trump claimed he had no business interests in Russia, despite signing a letter of intent regarding this deal and encouraging Cohen to privately pursue the project until at least the summer of 2016. Cohen even sought Russian President Vladimir Putin’s support for the venture, contacting Kremlin spokesperson Dmitry Peskov to seek help. (Cohen ended up talking to Peskov’s personal assistant and requested assistance in securing financing and land for the project.) Cohen recently began a three-year prison term in part because he lied to Congress in 2017 about the project, in what he says was an effort to align his story with Trump’s false claims. Trump Jr. also downplayed the deal in congressional testimony. He told the Senate Judiciary Committee he was only “peripherally aware” of the effort. A Senate aide says Trump Jr. made similar claims to the Intelligence Committee. Cohen, by contrast, testified that he briefed Trump Jr. or Ivanka Trump on the Moscow deal “approximately 10 times.”

The Intelligence Committee’s subpoena to Trump Jr.,  issued more than two weeks ago according to multiple reports, has drawn fierce attacks against the Republican chairman of the Intelligence Committee, North Carolina’s Richard Burr, from members of his own party. “Apparently the Republican chair of the Senate Intel Committee didn’t get the memo from the Majority Leader that this case was closed,” Sen. Rand Paul (R-Ky.) tweeted on Wednesday, referencing a recent floor speech by Mitch McConnell (R-Ky.). Burr’s fellow North Carolina Republican, Sen. Thom Tillis, who faces a primary challenge in 2020, also slammed Burr in a tweet. “It’s time to move on & start focusing on issues that matter to Americans,” he wrote. White House Chief of Staff Mick Mulvaney said on CBS News that it was “bad form” for the committee to subpoena Trump Jr. without giving the White House a “heads-up.”

Trump Jr. appears poised to fight the subpoena. The New York Times reported he may invoke the Fifth Amendment rather than testify. In a statement sent to various outlets, a person close to Trump Jr.—who would not allow reporters to identify him or her—said that “no lawyer would ever agree to allow their client to participate in what is an obvious PR stunt from a so-called ‘Republican’ senator too cowardly to stand up to his boss Mark Warner and the rest of the resistance Democrats on the committee.” The statement also asserted that “there was an agreement between Don and the Committee that he would only have to come in and testify a single time as long as he was willing to stay for as long as they’d like, which Don did.”

A committee spokesperson says there was no such deal with any witness: “Throughout the investigation, the Committee has reserved the right to recall witnesses for additional testimony as needed, as every witness and witness counsel has been made aware.”

It is unclear how aggressively Burr will pursue Trump Jr. On Tuesday, before news of the subpoena, Burr told the Washington Post that he was not inclined to press for the Justice Department to prosecute Trump Jr. or other witnesses facing questions about the veracity of their testimonies for perjury, given that Mueller had declined to charge them. Discrepancies between their testimonies and Mueller’s report apparently “weren’t criminal or they weren’t chargeable,” Burr told the Post, noting that Mueller had access to his own committee’s transcripts. But Burr had also previously said the panel will not tolerate dishonest witnesses. “If you lie to us, we’re going to catch you and we’re going to prosecute you, period, end of sentence,” he said last year.