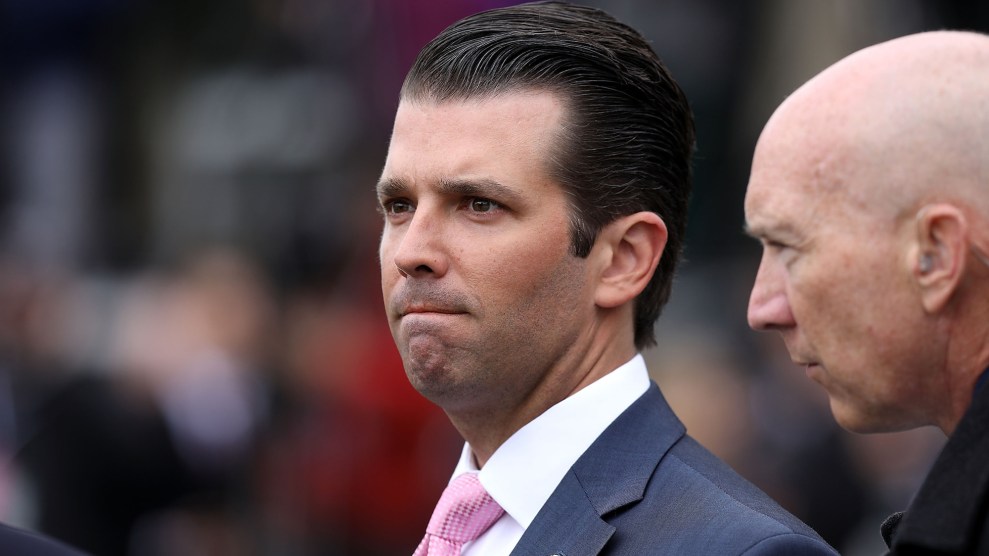 Donald Trump Jr. at the White House on April 2, 2018.Chip Somodevilla/CNP via ZUMA

Did Donald Trump Jr. speak to his father in June 2016 about a Russian offer to provide dirt on Hillary Clinton? Republicans on the House intelligence committee haven’t even bothered to find out, their Democratic counterparts say.

Committee Republicans on Friday released a 253-page report on Russian interference in the 2016 election, which says they “found no evidence that the Trump campaign colluded, coordinated, or conspired with the Russian government.” But Republicans did not try very hard to find such evidence. Democrats on the panel noted that the GOP did not contact many potential witnesses, subpoena sufficient records to check if witness testimony was accurate, or follow up on leads obtained during the probe.

“The Majority was unwilling to pursue the matter.”

One particularly notable example of the committee’s less-than-zealous approach to the investigation is its analysis of the infamous June 9, 2016, Trump Tower meeting at which Trump Jr. and other top Trump aides met with a Russian lawyer in an effort to acquire damaging information about Hillary Clinton from the Kremlin.

It’s unclear what candidate Trump knew about the meeting, but any involvement by him would certainly be a big deal—new evidence that he was aware of Russian efforts to connect with his campaign. Steve Bannon, the former Trump campaign chief, has said he believes the elder Trump likely knew of the meeting.

The Republican report says that “no witness, including the attendees, testified that candidate Trump was aware of the meeting prior to its public exposure in June 2017.” But a dissenting report released Friday by committee Democrats suggests Republicans did not vigorously pursue the question of what President Trump knew about the meeting.

The meeting was organized on behalf of Aras Agalarov, a construction magnate based in Russia, and his son Emin, a singer. The Agalarovs had partnered with the Trump Organization on the 2013 Miss Universe contest in Moscow. Rob Goldstone, a publicist for Emin Agalarov, emailed Trump Jr. to seek the meeting. In a June 3, 2016, email, Goldstone said that a senior Russian official, as “part of Russia and its government’s support for Mr. Trump” had “offered to provide the Trump campaign with some official documents and information that would incriminate Hillary and her dealings with Russia and would be very useful to your father.”

Less than 20 minutes late, Trump Jr. responded, “If it’s what you say I love it especially later in the summer.”

According to the Democrats’ report, Trump Jr. exchanged calls about the meeting with Emin Agalarov on June 6 at Goldstone’s request. The first call was at 4:04 pm. At 4:27 pm, prior to Trump Jr.’s second call with Emin, Trump Jr. received a call from a “blocked” number. Trump Jr. told the committee last year he did not know who had called him. The Democrats note, however, that Corey Lewandowski, Trump’s first campaign manager, told the committee that Trump Sr.’s “primary residence has a blocked [phone] line.”

Democrats say they made “repeated efforts to obtain the home or cell phone records for then-candidate Trump to determine whether the blocked call was Trump Jr.’s father.” But, they note, “the Majority was unwilling to pursue the matter.”