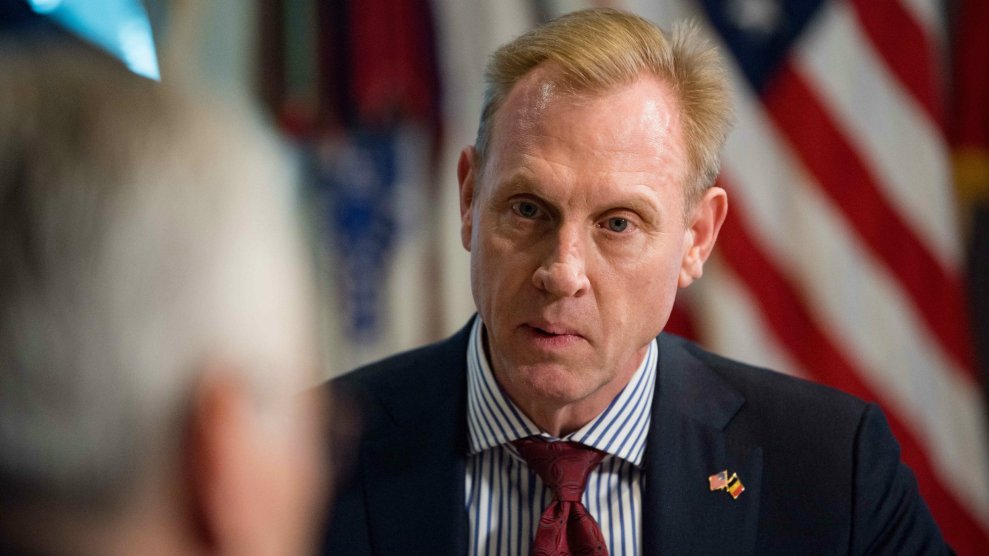 Donald Trump finally has his new man at the Pentagon.

On Thursday, the president nominated acting Defense Secretary Patrick Shanahan to serve in the position permanently, putting an end to speculation over who would succeed James Mattis atop the Defense Department.

The selection was long expected—Shanahan has been the longest-serving acting Pentagon chief in history after Mattis’ departure at the end of December—but still unusual by the standards of prior selections. No Defense secretary since Bill Clements, an oil baron who briefly led the Pentagon during Watergate, has had less government or military experience than Shanahan. Before joining the department as Mattis’ deputy in July 2017, Shanahan worked for more than three decades at Boeing. His industry bona fides and managerial experience were seen as useful complements to Mattis, a Marine who held command roles in Iraq, Afghanistan, and the First Gulf War.

During his four months as Mattis’ acting successor, Shanahan oversaw the implementation of Trump’s transgender military ban and was tasked with funneling Defense Department dollars toward the construction of a wall at the US-Mexico border. He won Trump’s admiration by criticizing expensive defense programs like the F-35, which is primarily managed by Lockheed Martin, but his tendency to sharply critique the government’s vendors also sparked an ethics investigation into whether he improperly favored Boeing, his old firm. The Pentagon’s internal watchdog cleared him of any wrongdoing last month, all but ensuring he would be Trump’s pick to lead the Defense Department permanently.

A once-vast field of potential candidates to succeed Mattis winnowed in recent months until Shanahan became the frontrunner by default. “You either have to be slightly out of your mind or totally willing to subordinate yourself to work for this administration,” Gordon Adams, a former Clinton administration defense official, told Mother Jones last month about Shanahan. “I don’t get the sense he’s out of his mind.”

Former Arizona Sen. Jon Kyl and retired Army Gen. Jack Keane were among just two leading choices who reportedly turned Trump job down to replace Mattis after he resigned in December. Mattis, known by the nickname “Mad Dog,” gained a reputation for slow-walking Trump’s unwelcome orders, but when the president announced he would withdraw US troops from Syria, the retired general had had enough. Whether Shanahan has that same impulse will be tested in the months to come.