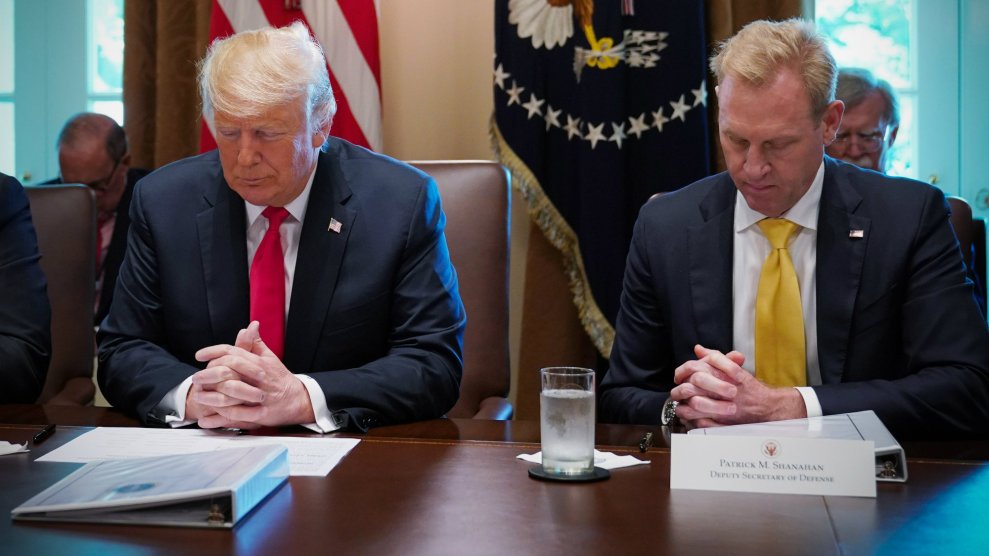 Deputy defense secretary Patrick Shanahan prays before the start of a Cabinet meeting in August at the White House.Mandel Ngan/AFP/Getty Images

President Donald Trump’s bizarre, rambling performance during a Cabinet meeting last week received attention for all the obvious reasons, from his historically inaccurate interlude about the Soviet Union’s invasion of Afghanistan to this strange assertion: “I could be the most popular person in Europe.” The president’s words sparked 48 hours of fact-checking and the usual mix of outrage and confusion, but lost in the chaos was the brief appearance of new acting secretary of defense Patrick Shanahan, an ex-Boeing executive who succeeded Marine Corps Gen. James Mattis last month.

During his nearly two years as Pentagon chief, Mattis was famously independent-minded, often opposing the president or slow-walking his divisive orders, which even Democrats applauded as a necessary check on an impulsive and unreliable commander in chief. But with Mattis gone and an inexperienced acting secretary in his place, Trump has an opportunity to reshape military policy more directly.

That Cabinet meeting proved to be Shanahan’s first test of whether he would maintain Mattis’ apolitical distance or adopt a more deferential tone, in the style of now-departed cabinet secretaries like Ryan Zinke and Scott Pruitt. In his first public comments by Trump’s side, Shanahan made his decision clear, at least for now. When asked to defend the presence of active-duty troops on the border, which national security experts have criticized as politically motivated, he responded, “The threat is real. The risks are real. We need to control our borders.” That was stronger language than his predecessor ever used. Mattis, who generally avoided discussing the border deployment, went only so far as to call it “legal” and “necessary.”

That lack of skill could provide Trump with a compliant secretary of defense for the first time in his administration. As just the third acting defense secretary in more than 70 years, the length of Shanahan’s tenure is uncertain. Turnover at the top of the Pentagon is historically rare, and the White House is apparently considering former Navy secretary Jim Webb as permanent secretary, according to reports last week in the New York Times and Politico, in addition to other candidates. But Trump has grown fond of Shanahan, and suggested last month that he could lead the Pentagon indefinitely. “He could be there for a long time. I mean, I’m in no rush,” Trump told reporters while visiting troops in Iraq. “He’s a good buyer. I wanted somebody that could buy, because I’m giving a lot of money and I don’t want it to be wasted.” And, as if to reassure Shanahan of his job security, Trump disavowed the Webb speculation in a tweet.

The story in the New York Times regarding Jim Webb being considered as the next Secretary of Defense is FAKE NEWS. I’m sure he is a fine man, but I don’t know Jim, and never met him. Patrick Shanahan, who is Acting Secretary of Defense, is doing a great job!

When Trump nominated him to serve as deputy defense secretary in June 2017, Shanahan had never spent a single day in government or the military. The son of a Vietnam veteran, he rose to become a senior vice president at Boeing, one of the premier government contractors, where he distinguished himself by rescuing troubled projects and became, in the words of one journalist, a “living, breathing embodiment of the military-industrial complex.” He was initially seen as a back-up choice—Mattis reportedly preferred former Pentagon official Michèle Flournoy, who ultimately turned the job down. But Shanahan’s procurement expertise charmed lawmakers who envisioned his knowledge of industry serving as a complement to Mattis’ four decades of experience navigating foreign policy and government relations. But not all lawmakers were so quick to embrace a deputy defense secretary nominee with such negligible experience in foreign affairs. The late John McCain (R-Ariz.), then the chair of the Senate Armed Services panel, scolded Shanahan during his confirmation hearing for not specifying whether he supported arming the Ukrainians against Russian military overtures. After amending his answer to clarify that he did support the move, McCain was still not satisfied.

“Have you not been aware of the thousands of people that have been killed by Vladimir Putin? Have you missed all that in your duties at one of the major defense corporations of this country?” McCain asked him, before offering an additional warning: “Not a good beginning. Do not do that again, Mr. Shanahan.”

.@SenJohnMcCain: "Do not do that again Mr. Shanahan or I will not take your name up for a vote before this committee. Am I perfectly clear?" pic.twitter.com/JNpIBkb9yB

Shanahan may have been fuzzy about arming the Ukrainians, but his mess-up hardly mattered given the unlikelihood of him ever becoming acting secretary. Turnover at the senior levels of government has reached record highs during the Trump administration, but abrupt changes in Pentagon leadership are historically rare, Ronald Spector, a scholar of military history at George Washington University, tells Mother Jones. Even rarer is the case of a deputy stepping in as the acting secretary of defense, which hasn’t happened since George H.W. Bush was president.

While Mattis played the role of de facto secretary of state, flying overseas to reassure allies that Trump’s overheated rhetoric would not undermine American leadership abroad, Shanahan was tasked with corralling the Pentagon’s bloated bureaucracy to be more efficient after years of budget cuts during the Obama administration. He also ran point on several controversial Trump initiatives, including the Space Force and a ban on transgender troops. Shanahan’s few publicly expressed views on foreign policy mostly parroted his boss. “Much of Pat’s view of the world has been formed by his relationship with Jim Mattis,” Jim Albaugh, Shanahan’s former boss at Boeing, told the Atlantic last week. Virtually the entire foreign policy questionnaire Shanahan filled out during his confirmation hearing includes answers at odds with Trump’s stated views on military policy. (A spokesperson for Shanahan did not respond to a list of questions for this article, including how Shanahan plans to align his views with the White House.)

To survive in Trump’s cabinet permanently, Shanahan will need to course correct on that front immediately. Being a “good buyer” will only go so far with a commander in chief as obsessed with loyalty as Trump, especially given the fact that his new position “makes him infinitely more subordinate to the president’s wishes,” Adams says. As the man standing between Trump and a skeptical national security establishment, Shanahan won’t command the respect Mattis held when forced to bury troublesome White House proposals in red tape. Unlike the battle-hardened Marine Corps veteran, Shanahan is still learning his way around the five-sided building.

Without a clear-eyed understanding of the Pentagon’s institutional history, Shanahan will be at a disadvantage when it comes to implementing programs promoted by Trump but reviled by the entrenched military bureaucracy. “To be really successful as a secretary of defense, you need someone who has the moral courage to be unpopular with the Services,” says Dan Grazier, a military historian and fellow at the Project on Government Oversight in Washington. In recent weeks, he’s already faced some early setbacks, including high turnover among his immediate staff, according to a report in the Washington Post, and vacancies in two of the Pentagon’s other most senior roles: deputy secretary and chief management officer. (Both offices are being filled in an acting capacity.) He’ll also have to contend with the first of several awkward directives from Trump, who told him during the Cabinet meeting to stop publicly releasing independent Pentagon reports on waste, fraud, and abuse by US troops in Afghanistan. (The Pentagon has not commented publicly yet on that apparent instruction.)

The coming weeks for Shanahan will be, as Adams put it, an “ambush.” A Democratic House newly equipped with subpoena power is expected to ramp up oversight of the Pentagon and throw a wrench into Republicans’ plans to boost defense spending. Adam Smith (D-Wash.), the incoming chair of the House Armed Services Committee, has already reacted skeptically to Shanahan’s appointment as acting secretary. “His expertise in management, research and development, acquisition, and procurement are valuable and conducive to the operations of the Pentagon,” Smith said in a December 26 statement. “However, he does not have the comprehensive understanding of global national security threats that Secretary Mattis does. Throwing him into the role of acting secretary with no notice in this way unnecessarily places the United States in a riskier position.”

Spector, the military historian, says the Pentagon has endured “much less disruption” than other federal agencies in the Trump era, but the uncertainty of an acting head could upset that calculus. He recalls one of his former students, a veteran, telling him recently, “I’m looking forward to an exciting year. Exciting, in the sense that a really scary horror movie is exciting.”