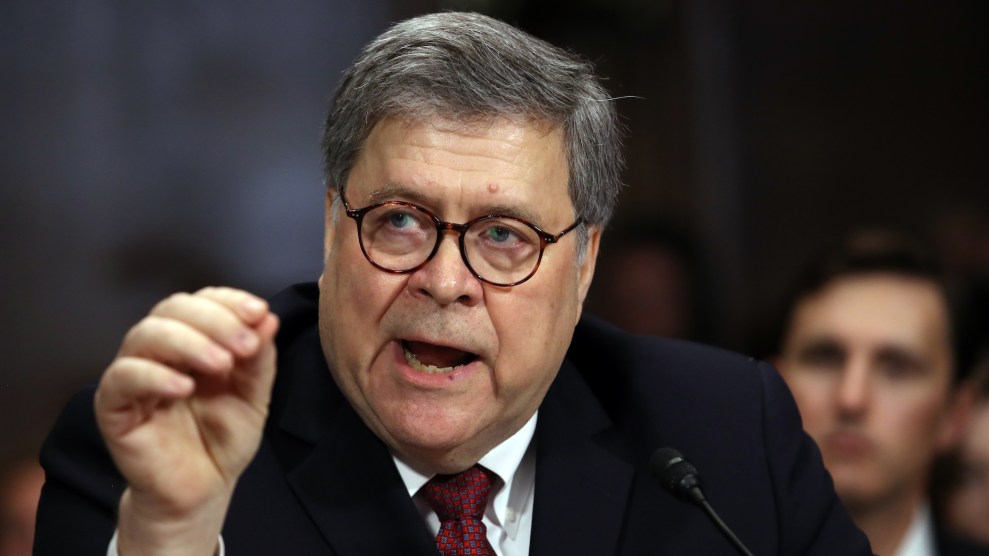 Early in William Barr’s appearance before the Senate Judiciary Committee Wednesday, the attorney general dropped a whopper. President Donald Trump, Barr insisted, “fully cooperated” with special counsel Robert Mueller’s Russia investigation. That is false. As Barr conceded under questioning, Trump refused to agree to an interview with Mueller’s team. Moreover, the president agreed only to answer written questions related to contact between his 2016 campaign and Russians—not about his alleged efforts to obstruct Mueller’s investigation. In those answers, Trump claimed more than 30 times not to remember or recall details, including any details about his contacts with advisers who knew of clandestine Russian efforts to assist Trump’s campaign. Mueller’s report called these responses “inadequate.”

But Barr’s bogus claim set the tone for a hearing in which he repeatedly made misleading assertions about Mueller’s investigation and failed to correct flatly false claims made by Republican senators.

Barr’s testimony came just hours after House Democrats released a March 27 letter Barr received from Mueller. In that memo, Mueller faulted Barr’s March 24 letter to Congress summarizing what Barr said were the bottom-line conclusions of Mueller’s report. According to Mueller, Barr’s letter failed to capture the “context, nature, and substance” of the probe. Mueller noted the existence of “public confusion about critical aspects of the results of our investigation” and urged Barr to release summaries the special counsel’s office had compiled for portions of the report. In a follow-up phone call, Barr refused.

Barr did not mention those contacts at an April 9 House hearing when Rep. Charlie Crist (D-Fla.) asked him if he knew why members of Mueller’s team were frustrated with his March 24 letter. “No. I don’t,” Barr said.

If that's true, there will be consequences. pic.twitter.com/CP9JHeKvqt

At an April 20 Senate hearing, Sen. Chris Van Hollen asked Barr if Mueller disagreed with Barr’s conclusions that the DOJ could not conclude that Trump obstructed justice. “I don’t know whether Bob Mueller supported my conclusion,” Barr said. Sen. Amy Klobuchar (D-Minn.) criticized Barr Wednesday for having gone “out of your way” to avoid mentioning Mueller’s letter in response to Crist or Van Hollen.

But Barr was unapologetic. He said Wednesday that he had communicated “directly with Bob Mueller” and thus had no clue what concerns Mueller’s team may have had. Barr asserted he didn’t think that Crist’s question was even “related” to Mueller’s concerns. “It seems to me to be a very different question,” Barr told Sen. Sheldon Whitehouse (D-R.I.).

“I can’t even follow that down the road,” Whitehouse responded. “Boy, that’s some masterful hair-splitting.”

Barr also claimed repeatedly that Mueller had not objected to his actual conclusions. He said that Mueller had told Barr in a phone conversation that his concern related to the media coverage of Barr’s March 24 letter, not to the words that Barr used in that letter. But this is misleading. Mueller’s March 27 letter clearly raised concerns with Barr’s letter to Congress, not press coverage of it. “The summary letter the Department sent to Congress and released to the public…did not fully capture the context, nature, and substance of this office’s work and conclusions,” Mueller wrote. “There is now public confusion about critical aspects of the results of our investigation. This threatens to undermine a central purpose for which the Department appointed the Special Counsel: to assure full public confidence in the outcome of the investigations.”

Whitehouse also pressed Barr on his April 10 statement that the FBI had engaged in “spying” on the Trump campaign. Barr’s statement delighted Trump and his backers, who claimed the country’s top law enforcement official had agreed with their claims that the FBI had improperly snooped on Trump. Trump’s campaign has raised money based on Barr’s claim.

But Barr asserted Wednesday that he had not thought using the word “spying” was a big deal. “I don’t think spying has any pejorative meaning at all,” he told Whitehouse.

Barr’s defense of Trump was buttressed by even more aggressive falsehoods from GOP lawmakers. Senate Judiciary Committee Chairman Lindsey Graham (R-S.C.) said at the start of the hearing: “After all this time and all this money, Mr. Mueller and his team concluded there was no collusion.” That’s not true. Mueller’s report explicitly avoids the word “collusion,” instead noting that investigators did not conclude that there was a criminal conspiracy between Trump’s team and Russia. The investigation “did not establish that members of the Trump Campaign conspired or coordinated with the Russian government in its election interference activities,” the report said. That is a not a finding that collusion did not occur, but instead that the probe did not establish an illicit conspiracy.

Graham also said that Mueller—who declined to reach a conclusion as to whether Trump had obstructed justice—had requested that Barr determine whether the president had illegally impeded the investigation. This, too, is false. Mueller did not ask Trump’s attorney general to weigh in on the issue; his report instead suggested that the substantial evidence of obstruction compiled by investigators is a matter for Congress to consider.

“With respect to whether the President can be found to have obstructed justice by exercising his powers under Article II of the Constitution, we concluded that Congress has authority to prohibit a President’s corrupt use of his authority in order to protect the integrity of the administration of justice,” the report said.

Barr did not correct Graham.