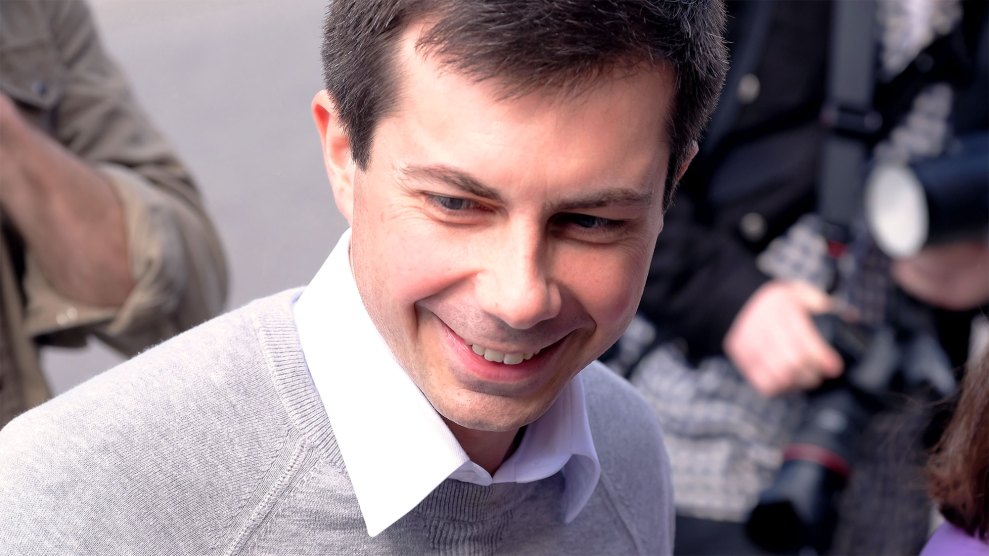 Pete Buttigieg launched his presidential campaign on Sunday afternoon, in the city he helms as mayor, South Bend, Indiana—officially joining a big, diverse field of Democrats vying to topple President Donald Trump in 2020.

Buttigieg fans clad in rain gear packed an old Studebaker building in South Bend for the announcement, a rust-belt venue that appeared to have sprung some serious leaks due to the inclement weather; while they waited, attendees were soaked to the sounds of the Broadway classic, “Don’t Rain on My Parade”. American and rainbow pride flags waved together, alongside placards emblazoned with the campaign’s shorthand pronunciation guide, “Boot Edge Edge”.

Promising “the courage to reimagine our future,” Buttigieg pledged to repudiate Trumpian politics of fear in favor of something “totally different”. “This time is not just winning an election, it’s about winning an era,” he said, checking off gun safety, economic insecurity, and democratic reform as among his core campaign concerns. Solving the urgent climate change crisis, he added, was the “life or death issue for our generation.”

“Change is coming, ready or not,” he said. “It calls for a new generation of leadership in this country.”

Watch the campaign launch below:

Buttigieg, who is coming to the end of his second term as the mayor, was previously running an “exploratory” phase of his campaign. A blistering roster of media interviews and live events transformed the virtually unknown 37-year-old from political novelty to genuine national contender in a matter of weeks, drawing voters curious about a candidate who boasts a unique combination of traits: he’s an Afghanistan war veteran, Rhodes scholar, speaks several languages, and he would be the party’s first openly gay presidential candidate.

In case you missed it, Buttigieg fielded a wide range of questions from Mother Jones editor-in-chief Clara Jeffery last month in front of a sold-out San Francisco audience, during which he shared his vision for beating Trump. “No investigation is going to turn up some piece of evidence that’s going to suddenly show us that the president’s not a great guy,” Buttigieg said. “A lot of people who voted for this president already know he’s not a great guy…If we’re not paying attention to that, I think we run the risk of making the same mistake over again.”

Listen to the full hourlong appearance below.