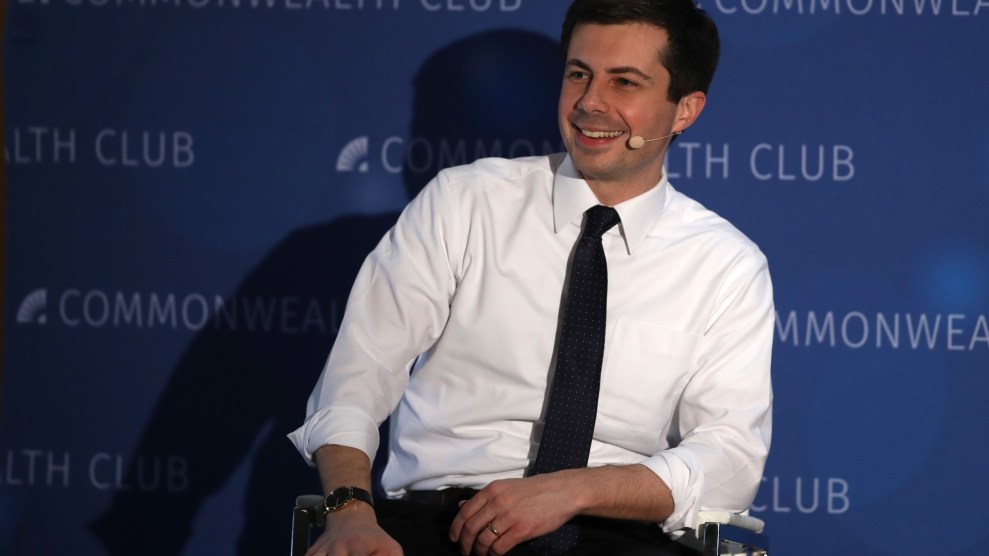 In a wide-ranging conversation in front of a sold-out San Francisco audience Thursday night, presidential hopeful Pete Buttigieg said President Donald Trump can only be beaten by fresh ideas and policies—not by investigations.

“A message is something that makes sense no matter who you’re running against.”

“No investigation is going to turn up some piece of evidence that’s going to suddenly show us that the president’s not a great guy,” Buttigieg said. “A lot of people who voted for this president already know he’s not a great guy…If we’re not paying attention to that, I think we run the risk of making the same mistake over again.”

His comments come as congressional Democrats are demanding that Trump’s Justice Department release the full report on special counsel Robert Mueller’s Russia investigation and are also pursuing numerous other inquiries into the president’s conduct. “Of course we’ve got to confront this president,” Buttigieg said. “When he lies, we’ve got to correct it. When he does something wrong, we’ve got to confront it. But that’s not a message. A message is something that makes sense no matter who you’re running against.”

Buttigieg (pronounced BOOT-edge-edge) spoke at the Commonwealth Club San Francisco in a conversation hosted by Mother Jones Editor-in-Chief Clara Jeffery. He’s coming to the end of his second term as the mayor of South Bend, Indiana. At 29, he became the youngest mayor in the United States when he assumed his city’s top job in 2011. In addition to his thoughts on what kind of campaign can defeat Trump next year, he discussed the challenges of coming out as a gay politician in Indiana and his love of Norwegian climate change television thriller Occupied.

Mayor Pete, as he’s known, is already commanding large and enthusiastic crowds as curious Democrats get their first look at a candidate who boasts a unique mix of selling points: He’s the first openly gay candidate for president from a major party, a veteran who completed a seven-month deployment in Afghanistan, a Rhodes Scholar, a concert pianist, and a polyglot who speaks a half-dozen languages.

He can also lay claim to some true virality: A story about him learning Norwegian because he wanted to read more of a Norwegian author’s books swept Twitter earlier this month (and then again when he answered a Norwegian reporter’s question in Norwegian). It seems that Mayor Pete is having a moment. He popped into third place in a recent poll in Iowa, behind former Vice President Joe Biden and Sen. Bernie Sanders of Vermont, and tied with Massachusetts Sen. Elizabeth Warren. And then there’s the cash: After a buzzy appearance on CNN, he raked in more than $600,000 in donations, allowing him to qualify for the first round of Democratic debates.

But despite these successes, it’s still a big leap from the mayor’s office in a city with just over 100,000 residents to the White House. His platform combines traditional progressive policy ideas (a “Medicare-style public option that everyone can buy into;” getting dark money out of politics) with more ambitious and controversial goals (potentially balancing the Supreme Court ideologically by expanding it to 15 justices; abolishing the Electoral College). And as the leader of a Rust Belt city in a red state (albeit in the Democratic stronghold of South Bend), he is acutely aware of his opportunity to appeal to working-class voters who feel left behind and expressed this frustration at the ballot box in 2016. He said a mistake made in 2016 was the whiplash that occurred when Democrats, faced with the possibility of a Trump presidency, quickly shifted their focus from their candidate to Trump.

“The more we can convey what we care about in terms of how it’s going to cash out in everyday life, how your life is going to be different, the better off we’ll be,” he said. He noted that a lot of big-ticket issues that many Democrats see as progressive—sensible immigration reform, for example—are actually viewed as practical by voters. “A lot of these so-called left positions are actually centrist by the standards of the American people, just not by members of the American Congress,” he said with a laugh.

But he said that when he came back from Afghanistan, where he was a naval intelligence officer, he wanted to find love. He met his husband on a dating app soon after he came out, and they got married last year. He’s been encouraged, he said, by other LGBT people in Indiana who, inspired by his story, have reached out.

Buttigieg was careful not to criticize his many competitors, acknowledging that there exists a lot of overlap between their platforms. And although a gay man, Buttigieg is still a white Christian male. Some feminists have argued that the women running for the nomination haven’t received the type of positive attention that has helped Buttigieg gain in the polls. Buttigieg agreed that things are probably easier for male candidates, but he said the breadth and diversity of the candidate pool means that “everybody gets a chance right now.”

The mayor from South Bend knows he has an uphill battle ahead of him, but if he continues to draw crowds like he did Thursday, he may have reason to be optimistic. And he knows it, too. Asked how Democrats can steer clear of the infighting that arguably helped Trump win in 2016, Buttigieg said with a grin, “What you want to do is nominate a really forward-thinking, inclusive, new-generation, young…” He trailed off, and the crowd went wild.