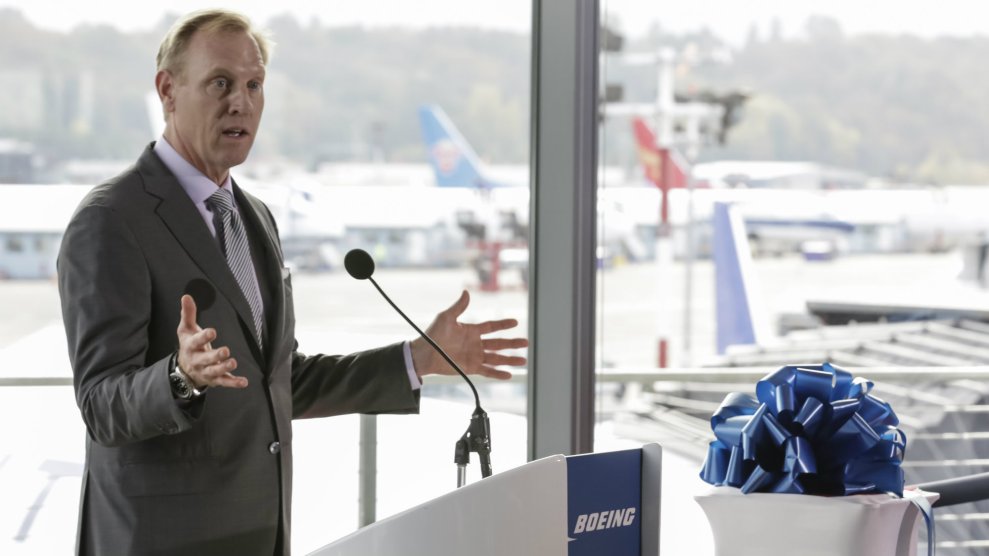 Acting Defense Secretary Pat Shanahan, then the senior vice president of Airplane Programs for Boeing, at the grand opening of the new Boeing 737 Delivery Center in October 2015 in SeattleStephen Brashear/Getty Images

Acting Defense Secretary Patrick Shanahan will address the House today for the first time in his capacity as the Pentagon’s highest-ranking official—and the hearing is likely to be an uncomfortable one for the former Boeing executive. Rep. Adam Smith (D-Wash.), chairman of the Armed Services committee, has frequently criticized Shanahan for the military’s approach to climate change and the Pentagon’s deployment of active-duty troops to the southern border. The hearing will almost certainly include a barrage of questions about these issues, in addition to Shanahan’s conduct as acting Pentagon chief, including whether he showed bias in favor of Boeing.

The purpose of Tuesday’s hearing is to discuss the $750 million national security budget, which includes $718 billion set aside for the Pentagon. After threatening to cap overall defense spending at $700 billion in the fall, Trump allowed for a top-line figure that was 7 percent larger, attracting concern from members of Congress. Lawmakers also are aware of the fact that last week, DOD’s internal watchdog opened an ethics probe into whether Shanahan “allegedly took actions to promote his former employer, Boeing,” where he spent more than three decades before President Donald Trump nominated him to be deputy defense secretary in June 2017.

Aside from an appearance before a Senate committee earlier this month, Shanahan has mostly avoided the spotlight since he took over on January 1 from Trump’s first defense secretary, James Mattis, who resigned over the president’s surprise decision to withdraw US troops from Syria. Where Shanahan stands on Syria and nearly every other major foreign policy is unclear. During his confirmation hearing for the role of deputy two years ago, he mostly parroted Mattis’ views. He was not asked about ISIS, Yemen, Syria, or other key national security issues at his recent appearance before the Senate Armed Services panel, with senators instead focusing on the department’s budget priorities and Trump’s declaration of a national emergency at the southern border. Given the number of issues that have emerged since then, here are five questions lawmakers should ask during his appearance today.

Were you involved in the decision to add more Boeing jets to next year’s budget?

First, a little background: The F-35 is a stealth fighter jet championed by advocates, including prime contractor Lockheed Martin, as the “world’s most advanced multi-role fighter.” But critics of military waste have long accused it of being a trillion-dollar boondoggle. Since the Pentagon first ordered these planes more than a decade ago, their cost has ballooned while several major safety deficiencies remain. No less a figure than Trump has blasted the program for its “tremendous cost and cost overruns.”

At least in private, Shanahan has agreed with that criticism. He reportedly called the F-35 “f—ed up” in a meeting with senior Pentagon officials and argued that if Boeing had been awarded the program, “it would be done much better,” according to sources who spoke with Politico. This context became significant when the Pentagon’s most recent budget proposal only asked for 78 F-35 joint strike fighters, 15 fewer than last year, and added eight F-15EX aircraft, which are produced by Boeing.

Shanahan had signed an ethics pledge that bars him from participating “in matters in which the Boeing Company is a party,” but it’s not clear when or how this recusal has been applied. Pentagon acting comptroller Elaine McCusker said at a press conference this month that the decision to buy additional F-15s “was made by Secretary Mattis before he left.” Citizens for Responsibility and Ethics in Washington (CREW), a watchdog group, asked the Pentagon’s inspector general to investigate Shanahan’s Boeing ties after the release of the department’s budget, a request that Shanahan told the Senate he welcomed. Last week, the inspector general’s office announced it had opened that investigation.

When will the Pentagon reveal how Trump’s border emergency affects particular military projects?

On March 14, when senators were forced to vote on Trump’s decision to declare a national emergency at the southern border—which they ultimately rejected—they were missing a crucial piece of information. The Pentagon had still not informed them which military projects might be put on hold to steer funding toward Trump’s border wall despite several rounds of inquiries from legislators in both chambers. For weeks, the White House had said $3.6 million in military construction funds would go toward the wall without providing specifics of where the money would come from.

During a Senate hearing the same day, Shanahan agreed to supply a list of projects that might be affected, but lawmakers were visibly annoyed that they would not be able to view it before their afternoon vote. “I feel completely sandbagged,” Sen. Tim Kaine (D-VA), whose home state includes the largest naval installation in the world, told Shanahan. “You’re going to send it to us today after the vote on the emergency declaration?” Shanahan assured him it would arrive promptly, but days later he still had not sent the list, prompting further criticism from Congress. The Pentagon finally released a collection of all projects that could potentially be affected on March 18, but it did not specify which programs will actually be delayed.

Lawmakers of both parties have been seeking the Pentagon list of MilCon projects that could be canceled/delayed to pay for wall. Instead Pentagon sent the Hill today a list of hundreds of projects totaling around $12.8b that is the universe of possibilities

Shanahan no doubt wants to avoid ticking off Congress, but continually stonewalling lawmakers about these projects will win him no favors, even if it may impress his boss. He will need a better answer in front of the House.

What does the military gain from its new policy on transgender service members?

Shanahan is not the brains behind the Pentagon’s transgender military ban, which was the inspiration of his commander-in-chief, who banned trans service members via Twitter in July 2017. Mattis spent months delaying Trump’s initial order, but it will fall to Shanahan to implement the controversial policy once it kicks into effect on April 12. Under the department directive, most trans enlistees will be forced to use the gender assigned at birth. Pentagon officials claim this approach does not constitute a ban, but Shannon Minter, legal director for the National Center for Lesbian Rights, told Mother Jones, “If you’re transgender and are being forced to live in your birth sex, you have to directly deny who you are.”

Shanahan has never been asked to publicly justify the policy, which dozens of former military officers have denounced as bigoted and unjustified. Even Mark Milley, the Army’s chief of staff who Trump chose to be the next chair of the Joint Chiefs of Staff, told Congress last year that he was aware of “precisely zero” issues with transgender troops in the past. That discordance is not bound to fly with Smith’s committee, which held a hearing with five trans service members last month who all opposed the policy.

Do you see climate change as a threat to national security and how is the military preparing for it?

Weeks after Shanahan ascended to the Pentagon’s top role, he earned the ire of the new House Democratic majority by issuing a report on climate change that lawmakers bashed for excluding specific details. In recent years, Congress had been requiring the Pentagon to step up its efforts to guard against the threat of droughts, rising sea levels, and hurricanes—all problems exacerbated by climate change. In this particular report, Congress had required the Pentagon to catalog “a list of the ten most vulnerable military installations within each service” along with “combatant commander requirements resulting from climate change over the next 20 years.” The 22-page submission defense officials provided in January left out several major military bases and failed to list a single Marine Corps installation. In a letter to Shanahan days later, Democrats demanded a complete do-over “on or before” April 1.

“They clearly ignored the requirement in the law,” Rep. Jim Langevin (D-R.I.), an Armed Services committee member, told Mother Jones at the time. “The report they issued was completely unsatisfactory.”

Compared to other federal agencies in the Trump era, the Pentagon has actually been relatively candid in acknowledging the importance of climate change as a threat multiplier to its bases and personnel, but Shanahan, in his extended public audition to be Trump’s permanent defense secretary, probably does not wish to contradict his boss’s well-known views on the subject. That leaves an empowered band of House Democrats to press the matter and try to force Shanahan’s hand in some capacity.

Why does the Pentagon want more money for its controversial “slush fund” account?

Few things rile up Congress more than the subversion of its power of the purse. Under budget caps instituted by Congress in 2011, the Pentagon legally cannot receive more than $545 million in base funding. Any funding for an emergency or “overseas contingency operations,” which includes war-fighting appropriations, are not restricted by the caps. Because the Pentagon has insisted for years that these limitations set their base budget too low, officials have taken to inserting extra funds in OCO that have nothing to do with fighting a war. As Mother Jones reported earlier this month:

The Pentagon is open about the fact that this account is set up this way to avoid being limited by budget caps. The department acknowledged as much directly in a press release unveiling the budget request for fiscal year 2020 when it emphasized that OCO would include nearly $98 billion in funding that has nothing to do with war-making. These line items were moved from the Pentagon’s base budget into OCO “due to limits on base budget defense resources under the budget caps in current law.”

Presidents from both parties have used this stopgap account as a backdoor way to increase defense spending, but lawmakers lost their patience with Trump’s strategy to steer more than $160 billion of the Pentagon’s budget toward it, a 140 percent increase from last year. “I think it’s time to stop this business of more more more for the military,” Sen. Elizabeth Warren (D-Mass.), a member of the Senate Armed Services Committee, told Shanahan this month.

Shanahan has disputed criticism that the account is a “slush fund,” but he’ll need to come up with a better justification, given House Democrats’ reluctance to approve the department’s gambit. In a joint statement released last month, Smith and House Budget Committee Chairman John Yarmuth (D-Ky.) said, “Rather than being honest and responsible about his budgeting, the President is choosing to deceive the American public yet again. Democrats will reject this cynical proposal to flout the basic principles of open and honest governance and will instead—with full transparency—pursue a course that invests in our national priorities and makes us stronger both at home and abroad.”