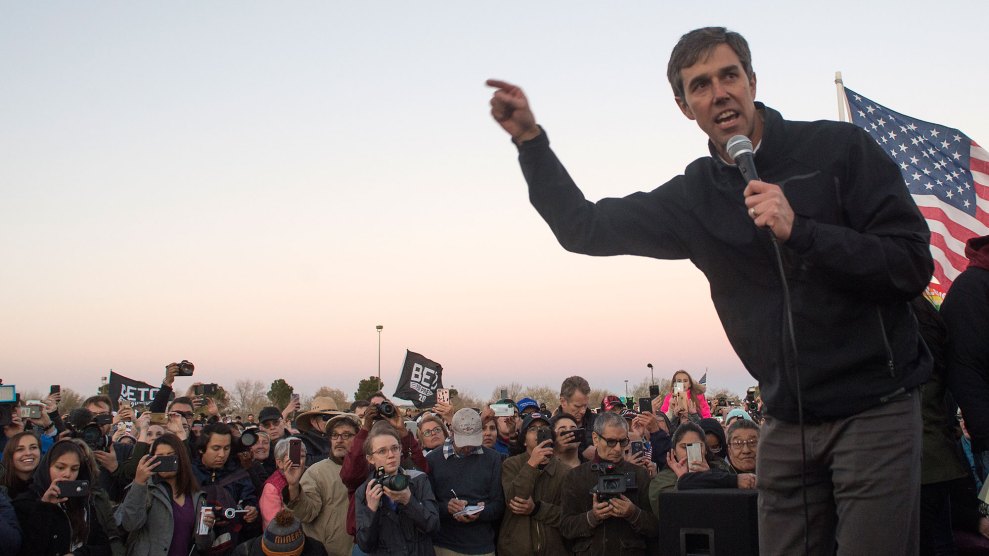 First things first: You should get the pronunciation right. It’s pronounced BEH-toe. Not Bay-toe. Or Bee-toe. Beto, as in “let go.”

OK great. Now I’ll use it in a sentence: Beto O’Rourke, the former Democratic congressman from Texas who nearly unseated Republican Sen. Ted Cruz in 2018, announced Thursday morning he would seek the Democratic nomination for the president.

I am running to serve you as the next president. The challenges we face are the greatest in living memory. No one person can meet them on their own. Only this country can do that, and only if we build a movement that includes all of us. Say you're in: https://t.co/EKLdkVET2u pic.twitter.com/lainXyvG2n

The 46-year-old, who served three terms in Congress following a stint on the El Paso city council, joins a crowded field of Democratic heavyweights that is only likely to grow larger in coming weeks as former Vice President Joe Biden moves closer to a possible run. O’Rourke enters the race as not quite a favorite, but for the first time in his career, something other than an underdog—boasting a national celebrity and a record-shattering small-dollar fundraising army. His entry into the race, after months of carefully drawn-out speculation, will shake up the field in a major way.

I’ve followed O’Rourke’s career since he first appeared on the national scene in 2012, when he challenged eight-term incumbent Silvestre Reyes in a Democratic primary and—thanks in part to a delay in the primary due to a legal battle over redistricting, a super-PAC partially funded by his father-in-law, and a relentless campaign style—avoided a runoff by a few hundred votes. Several hundreds of millions of stories have been written about O’Rourke since, but here are a few things you should know:

He moved back to El Paso to publish an alt-weekly. It sounds like trivia, but it’s actually important. As I reported earlier this year:

Stanton Street took two and a half years to come together and just a few short months to fall apart. But it was a formative experience for O’Rourke. The lifespan of the publication, from its inception as an online-only magazine to its 15-issue run in print, coincided with a period of transformation and turmoil, both in El Paso and in O’Rourke’s own life, and it offered its young publisher a crash course in city politics and community-building. Challenging the city’s establishment in an unfriendly environment, he embraced new platforms and a seat-of-the-pants ethic. Long before he was musing on Medium about Kansas cafes, his fledgling alt-weekly was, in a sense, O’Rourke’s first campaign, and though he did not win, it would lay the foundation for his political career to come.

He was once in a band called the Sheeps, in which he wore a white onesie and a sheep’s head on stage and pretended to be from New Zealand. This is, in fact, just trivia. Don’t be a weirdo like Alex Jones and derive meaning from it.

His previous opponents have hit him hard for his support of a controversial downtown redevelopment plan pushed by his father-in-law while he was in the city council. Here’s the full backstory on that.

He’s from the border. I mean, yes, duh, El Paso is on the border. But more than perhaps any other candidate—certainly more than Elizabeth Warren or Bernie Sanders—O’Rourke’s identity is rooted less in ideology than in a sense of place. During his Senate campaign he ran hard against the wall and Trump’s border policies. And he first made a splash in national politics in 2009, when he used his city council perch to call for an end to the War on Drugs, later publishing a book to make the case in full.

He lost his last race. But don’t overthink it. As I wrote last fall, he did so in a way that left Texas Democrats more energized than they’d been in years, broke fundraising models, and arguably created a whole new style of campaigning. That’s not a small thing; breaking the Republican dam in Texas is arguably the most significant thing you can do in Democratic politics short of being president. Which brings us to…

He’s not running for Senate. But he still can. Senate Minority Leader Chuck Schumer—and many Texans—hoped he would finish what he started in 2018 by challenging Republican Sen. John Cornyn in 2020. But if things don’t work out in Iowa, he (along with former Housing and Urban Development Julian Castro) has until November to change his mind before the window closes for good.