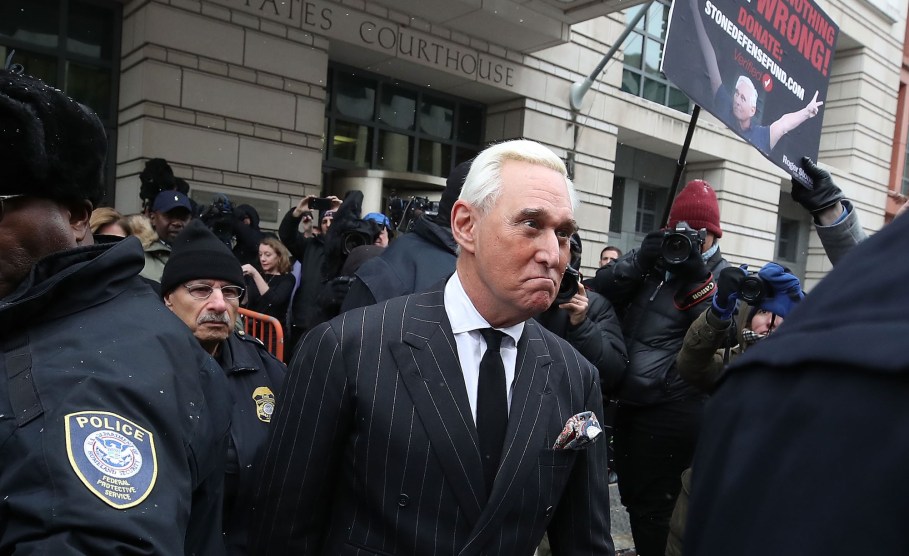 US District Judge Amy Berman Jackson may do something many Americans have long hoped for: shut up Roger Stone.

Since his January 25 arrest on charges of obstructing of justice, witness tampering, and perjury, Stone has embarked on a media blitz using cable news, social-media posts, and other means to argue his innocence, attack special counsel Robert Mueller, and seek donations to his legal defense fund. He drew raucous cheers when he appeared Saturday night at a Virginia Women for Trump event taking place at Trump’s Washington hotel.

“Is that understood, Mr. Stone?”

But Jackson, who was assigned Stone’s case, said at a hearing Friday that she is considering placing a gag order on Stone that would bar him from publicly commenting on his court proceedings. She said she is concerned that Stone’s efforts could make it hard to avoid bias among potential jurors. “This is a criminal proceeding and not a public relations campaign,” she warned Stone.

Stone has vowed to resist restrictions on his public statements. As he wrote last week on his Instagram account, “No gag order! I will fight and the deep state is in panic mode! Onward…”

Yet even without such an order, Jackson has already partially muted Stone. On Friday, she noted that Stone’s bail conditions bar him from contacting potential witnesses or victims in his case, pointing out that the prohibition includes emails, text messages, Instagram posts, WhatsApp messages, or intermediaries. “Is that understood, Mr. Stone?” Jackson asked.

Jackson’s instructions are notable because Stone, whom Twitter removed from its platform in October 2017, has routinely used Instagram to attack two key witnesses cited as Person 1 and Person 2 in the prosecutor’s indictment of Stone: conspiracy theorist Jerome Corsi and comedian and activist Randy Credico.

The witness tampering charge against Stone relates to texts and emails he sent Credico in late 2017 and 2018 in what prosecutors allege was an effort to dissuade Credico, whom Stone had claimed was his back channel to WikiLeaks’ founder Julian Assange, from assisting investigators looking into Stone. In interviews last year, Credico told Mother Jones that he feared he might be targeted by violent Stone supporters incited by Stone’s online attacks.

“I will fight and the deep state is in panic mode!”

In recent weeks, Stone has trained most of his fire on Corsi, irate that he told prosecutors he helped Stone generate a false story to explain interactions they shared during the 2016 campaign related to emails allegedly stolen by Russian intelligence and shared with WikiLeaks. Corsi has said he may sue Stone for defaming him in statements about Corsi’s job performance at Infowars, the conspiracy site where both men have worked. Even after Stone was arrested he continued to blast Corsi, labeling him a “Judas” in an Instagram post just hours after Stone was released on bond.

Jackson’s statements suggest she considers social posts attacking a witness a form of prohibited communication. Since the orders, Stone has continued posting on Instagram, but he has avoided attacks on witnesses in his case.

In an email Friday evening to Mother Jones, Grant Smith, one of Stone’s lawyers, didn’t specifically address his client’s new tone, but said that “Mr. Stone understands his obligations and will abide by any and all orders of the Court.”