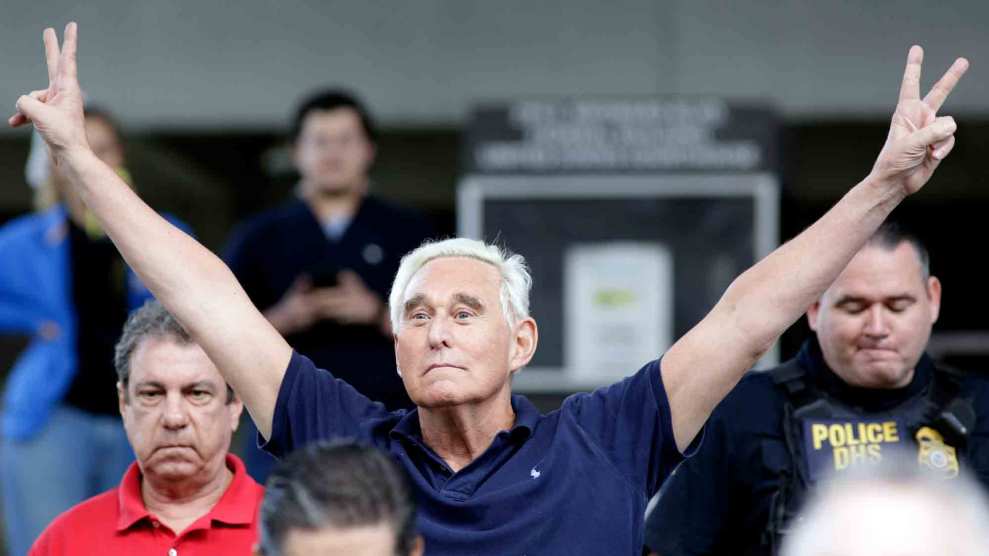 Roger Stone, the conniving conspiracy theorist and self-proclaimed dirty trickster whose motto is “admit nothing, deny everything,” was indicted Friday morning by special counsel Robert Mueller for allegedly lying to the House intelligence committee about his efforts to interact with WikiLeaks during the 2016 presidential campaign. The indictment presents a strong case that Stone, a longtime adviser to President Donald Trump, engineered a post-election coverup, and it maintains that the Republican operative was in contact with the Trump camp regarding WikiLeaks’ actions while the campaign was underway. These charges may undermine Trump’s reported claim that he never talked with Stone about WikiLeaks’ release of Democratic documents purloined by Russian President Vladimir Putin’s hackers. But the indictment does leave out a crucial matter: how Stone actively assisted the Russian assault on the 2016 election.

After the cyber-swiped Democratic Party emails were dumped by WikiLeaks in mid-July 2016 at the start of the Democratic National Convention, Stone publicly noted what many others had concluded: that the Russians had probably engineered this attack, with the likely intent of helping Trump. But Stone quickly reversed course, and in early August he became a fierce advocate of Moscow’s cover story that Russia was not involved in this assault on American democracy.

The Democratic National Committee had first disclosed that its computer system was penetrated by suspected Russian hackers in mid-June 2016. Shortly after that, an online persona adopting the name Guccifer 2.0 claimed responsibility for the theft and said he was merely a Romanian hacker who had acted alone—that is, the Russians had nothing to do with the caper. Guccifer 2.0, whose moniker referred to an infamous Romanian hacker then in an American prison, released some of the stolen documents but declared online that “thousands of files and mails” had been given to WikiLeaks. Though Guccifer 2.0 stuck to this claim of being a lone wolf from Romania, cybersecurity researchers soon unearthed clues linking Guccifer 2.0 to Russian hackers and indicating that Guccifer 2.0 was nothing but a front set up by Moscow’s clandestine cyber-warriors. And after the Democratic convention, media reports noted that the US intelligence community had “high confidence” that the Russian government was behind the cyber break-in at the DNC. Former President Barack Obama, not yet prepared to reveal this information, stated publicly that it was “possible” that Russia was the culprit and that “on a regular basis they try to influence elections in Europe.”

That was not Trump’s line. His campaign was denying that Russia was intervening—and asserting that there were no ties between Russia and Trump. Trump even called on Russian hackers to target Hillary Clinton. And Stone, a Trump intimate who had helped organize Trump’s campaign before becoming a pro-Trump freelancer, jumped aboard the no-Russians-here train.

On August 4, Stone did an interview with Infowars’ Alex Jones—a fellow Trump-supporting conspiracy theory champion—and claimed, “We know…that the DNC WikiLeaks absolutely, positively did not come from the Russians. We know that because Guccifer 2 took credit…and initially released them.” The next day, Stone published a piece on the conservative website Breitbart headlined “Dear Hillary: DNC Hack Solved, So Now Stop Blaming Russia,” asserting, “I have some news for Hillary and Democrats—I think I’ve got the real culprit. It doesn’t seem to be the Russians that hacked the DNC, but instead a hacker who goes by the name of Guccifer 2.0.” (Breitbart was then being run by Stephen Bannon, who would soon take over the Trump campaign.) Stone contended that all this talk of Russia was merely Clinton trying “to deflect after the fiasco at the Democrat National Convention” (caused by the release of DNC emails that enraged supporters of Sen. Bernie Sanders) and that the mainstream media was falling for her trickery. He tweeted out a link to his piece, declaring, “Roger Stone shows Russians didn’t hack Hillary.” A few days later, Guccifer 2.0 expressed their appreciation, publicly tweeting at Stone, “thanks that u believe in the real #Guccifer2.” In a private Twitter message to Stone, Guccifer 2.0 wrote, “thank u for an article about me!!!”

Stone was not bringing any new evidence to the conversation. He was merely accepting the debunked story of Guccifer 2.0 at face value. Nevertheless, other conservative sites picked up Stone’s contention and spread it. And this matched the Trump camp’s assertion—which Trump would soon be making directly—that there was nothing to the Russian story. It also matched statements from the Kremlin insisting it had nothing to do with the hack-and-dump attack against Clinton and the Democrats. Stone was echoing and amplifying the disinformation spread by a foreign adversary to hide its information warfare attack against the United States.

Stone went further than spouting Moscow’s line: He collaborated with the Russians. On Twitter, he hailed Guccifer 2.0 as a “HERO.” (He also called WikiLeaks founder Julian Assange a “hero.”) And in mid-August, in a private Twitter message, Stone asked Guccifer 2.0 to promote a column he had written. Guccifer 2.0 replied: “i’m pleased to say that u r great man. Please tell me if I can help u anyhow. It would be a great pleasure to me.”

In the time since then, the US intelligence community and Mueller have definitively pegged Guccifer 2.0 as a Russian front. That means Stone was promoting and privately communicating with Putin’s operators as they mounted their clandestine operation against the United States. He was doing what he could to legitimize Guccifer 2.0 and spare Russia blame for its cyberwarfare aimed to hurt Clinton and boost Trump. Consequently, Stone was aiding and abetting Putin’s plot against America. (Trump, Paul Manafort, and others similarly assisted Moscow.) By denying Russia’s involvement, Stone and other Trumpsters turned this issue into a partisan controversy and made it tougher for the United States to forge a unified and vigorous response to Putin’s attack. They helped the Kremlin get away with it.

Lying to Congress is a serious crime. But helping a foe as it endeavors to undermine an American election is treacherous wrongdoing. Perhaps it was not illegal for Stone to hype the disinformation of Guccifer 2.0 to distract from the truth in order to protect Trump. It was, though, certainly an act of betrayal—and an act of villainy far greater than anything alleged in the indictment.

Listen to Mother Jones DC bureau chief David Corn and foreign influence reporter Dan Friedman explain Mueller’s latest indictment, and what it might mean for Trump, on this breaking news edition of the Mother Jones Podcast: