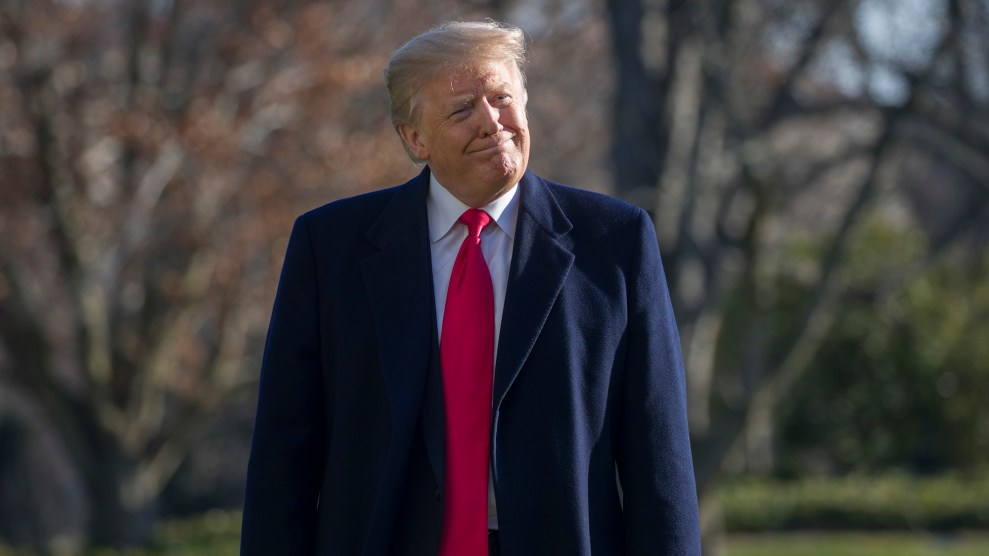 When President Donald Trump delivers his Oval Office immigration address Tuesday night, he will almost certainly say things that are demonstrably false and have already been debunked by fact-checkers. The hard part is knowing just which medley of fabrications he will reach for to depict a fake border security crisis. He will likely rely on old favorites, but there is always the possibility that he will simply make up a number on the spot.

All major networks will air Trump’s speech. Back in 2014, when former President Barack Obama asked for airtime for a major immigration announcement, the networks turned him down, choosing to air programs like The Biggest Loser instead. The fact that Trump, unlike Obama in 2014, is not expected to announce significant policy changes Tuesday night raises further questions about why the networks are carrying it live.

With the United States in the third week of a shutdown over the president’s demand for $5 billion of wall funding, Trump needs to show that border security justifies the chaos caused by his decision to force the government closed. Below are some of the falsehoods Trump is most likely to use to make that case when he starts speaking at 9 p.m. Eastern.

Trump will likely frame the shutdown as a response to a security and humanitarian crisis at the border. It’s hard to believe Trump—who was forced to abandon a policy of forcibly separating migrant families—cares much about a humanitarian crisis that primarily affects Central Americans, so let’s set that aside for now. His claim that there’s a security crisis that requires a wall to solve is more obviously false. The number of migrants “apprehended” by Border Patrol agents has increased this year, but is still far below the averages under former Presidents Ronald Reagan, Bill Clinton, and George W. Bush. The word “apprehensions” is also misleading, because families, a record number of which are coming to the United States, are often actively seeking out Border Patrol agents and then requesting asylum. Border Patrol stopped about two people per agent per month in the 2018 fiscal year.

There are terrorists everywhere

The Department of Homeland Security’s public statements often appear crafted by members of George Orwell’s Ministry of Truth. Take the agency’s argument that America needs a wall because DHS stopped nearly 4,000 known or suspected terrorists from coming to the country in the 2017 fiscal year. The way Trump officials at DHS have phrased the stat was obviously fishy, and it was clear that those “suspected terrorists” could have been stopped anywhere in the world. White House press secretary Sarah Huckabee Sanders tried to push the nearly 4,000 figure on Fox News over the weekend, only to be fact-checked by anchor Chris Wallace.

On Monday, three days after DHS sent the stat to every member of Congress, NBC News reported that during the first half of the 2018 fiscal year, Customs and Border Protection stopped only six migrants who were known or suspected terrorists at official ports of entry along the southern border. CBP stopped 41 migrants in that category along the northern border with Canada. Border Patrol blocked only five migrants on the terrorism list, and it is not clear how many of them were stopped at the southern border.

There are criminals and gang members, too

The Trump administration likes to say it apprehended 17,000 people with criminal records along the border in the 2018 fiscal year. What it doesn’t say is that 62 percent were stopped by CBP officials who work at ports of entry—those migrants weren’t trying to sneak in, but had attempted to enter the country through official channels. Three-quarters of the 6,259 criminals (a count that includes people convicted in the United States or in other countries’ courts) arrested by Border Patrol agents in the first 11 months of the 2018 fiscal year had immigration violations or DUIs. Only three were guilty of murder or manslaughter.

DHS has also tied its wall argument to arresting or deporting 6,000 gang members. But it’s admitted that only about 800 of those gang members were stopped trying to cross the southern border illegally. The vast majority were arrested by Immigration and Customs Enforcement, the agency responsible for enforcing immigration laws away from the border. And as a recent investigation by ProPublica revealed, ICE’s process for labeling someone a gang member can be deeply flawed.

And don’t forget the drugs

In a particularly misleading border wall slideshow released Friday, the White House sounded the alarm on drugs coming across the border. It did not mention that with the exception of marijuana, which is harder to hide, the vast majority of drugs are smuggled in vehicles that drive through official border crossings every day. The Trump administration knows this, but chose to mislead the public anyway. On Sunday, the White House asked Congress for more than $600 million of screening technology to help stop drugs and other contraband smuggled through…ports of entry.

Close encounters of another kind

A “Myth/Fact” brief released by DHS on Monday stated that more than 3,000 “special interest aliens” were encountered at the southern border last year. Special interest aliens are generally defined by the US government as people who may pose a threat to the United States based on their country of origin and the route they take to get to America. That vague criteria appears to encompass asylum-seekers and other migrants from countries including Afghanistan, Eritrea, and India who trek through a section of the Colombian jungle known as the Darién Gap to eventually reach the United States. I met Eritrean asylum-seekers who had done just that while I was at the border over the summer. There was no reason to believe they posed any threat to America.

We need the wall because we care

Two migrant children—Jakelin Caal Maquin and Felipe Alonzo-Gomez—died in Border Patrol custody in December. They were the first children to die in Border Patrol custody in more than a decade. The Trump administration is now arguing that a wall is needed to stop the “humanitarian crisis” caused by families and children making the dangerous journey north, even as it tries to force asylum-seekers to wait for years in dangerous Mexican border towns.

The talking point is not a hard number that can be debunked like the ones above. But, to paraphrase Stephen Colbert, you might want to look it up in your gut. Does a president who began his campaign by attacking Mexico for sending “rapists,” repeatedly compared immigrants to deadly snakes, and fumed about “shithole” nations want to build the wall for the good of vulnerable Latin Americans? Or is he trying to make the emblem of his xenophobia seem like something charitable at a time when Americans are concerned about the deaths of two children?