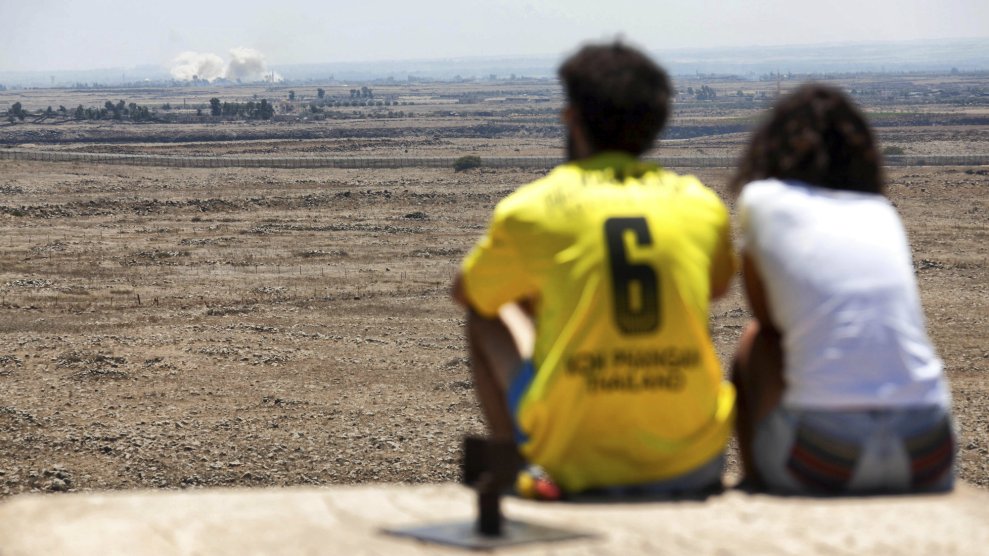 Israeli civilians on the Golan Heights watch as fighting rages just beyond the border fence in Syria between Syrian government forces and ISIS fighters in July.Mati Milstein/NurPhoto/Sipa USA

The US-backed coalition to fight ISIS has quietly stopped revealing important details about strikes taken against the terrorist group, despite combat intensifying in recent weeks. For the past several months, the coalition has acknowledged the date, location, and intended targets of its air and artillery strikes in Syria and Iraq, but decided on January 4 to reduce the frequency and specificity of these reports, citing the “continued degradation of ISIS” as a reason for watered-down updates.

“That unfortunately does not match reality,” Chris Woods, founder of the nonprofit Airwars, which tracks civilian deaths in Syria, Iraq, and Libya, told Mother Jones. “We are seeing a high number of strikes, relatively speaking.”

The reports are the best official acknowledgement of coalition strikes. In addition, nongovernmental organizations and humanitarian groups rely on locational information from them to cross-check on-the-ground estimates of civilian casualties. “This new policy further obfuscates the Trump administration’s already cloudy reporting on civilians it kills,” Letta Tayler, a senior researcher at Human Rights Watch, said in a statement. “It’s hard not to construe this information rollback as a deliberate attempt to evade scrutiny and, ultimately, responsibility for potentially unlawful killings.”

Even though ISIS has lost 99 percent of the territory it once occupied in Syria, the terrorist organization retains thousands of fighters and is reverting to its guerrilla roots, a shift that means ISIS continues to remain a serious geopolitical threat, according to US officials as high-ranking as Gen. Joseph Dunford, chairman of the joint chiefs of staff. On December 6, he argued that a lasting US military presence in the region is needed to eradicate remaining militants. Less than two weeks later, President Donald Trump abruptly rejected that view, when he announced the withdrawal of roughly 2,000 American troops from Syria, citing the apparent defeat of ISIS. (Trump might have done well to consult the coalition’s own data that said forces attacked 666 ISIS tactical units in Syria during the final two weeks of December.)

Since Trump’s surprising announcement, US national security officials have struggled to lay out to the public the precise terms for a withdrawal. A senior administration official tasked with briefing reporters anonymously was unable to answer basic questions about when troops would leave Syria. “It’s not that I’m not telling you; it’s that I don’t know, quite frankly,” the official said. National security adviser John Bolton, who had previously said that US troops would remain in Syria until Iranian troops and their proxies left, struggled to align his view with Trump’s assertion that “getting out of Syria was no surprise.” During a recent trip to Israel and Turkey, Bolton suggested that American troops would only leave if Israel’s security and that of “our other friends in the region” were secured—objectives that are impossible to accomplish within the 30-day timeline originally set by the Pentagon. Bolton all but disregarded that estimate. “The timetable flows from the policy decisions that we need to implement,” he said. In another twist, the US finally began withdrawing something from Syria last week, just not troops. Defense officials told the New York Times that the removal will take “at least four to six months to complete.”

It was in the midst of this chaotic sequence of events that the coalition announced its change in policy. In its January 4 report, officials left out crucial information about the location of strikes and tersely noted that future releases would only be published biweekly. “Our intent is to reduce the number of reports while maintaining transparency,” the two-page statement noted. The last of the coalition’s weekly reports from December 19 identified strikes in far greater detail.

The Intercept first noticed and reported on the coalition’s change in policy.

In contrast, the Pentagon regularly issues detailed reports about smaller military strikes. For example, there are regular reports about military efforts in Somalia against Shabab, an extremist group linked to Al Qaeda, where roughly one-fourth the amount of troops are deployed in comparison to Syria. Last week, US Africa Command sent out releases on three consecutive days.

In addition to being inconsistent with stated practices in other conflicts, the coalition’s approach to strike reports belies the fighting conditions in Syria and Iraq right now, when Airwars is tracking the “most significant alleged civilian harm” since the capture of Raqqa, the de facto ISIS capital in northern Syria, more than a year ago. The bloody campaign to liberate Raqqa and Mosul, Iraq’s second-largest city, from ISIS control contributed to the startling rise in civilian deaths in the region during the early months of the Trump administration. Airwars estimated that nearly 2,200 non-combatants died in the first six months of Trump’s presidency, as opposed to roughly 2,300 during Obama’s entire tenure. On behalf of Airwars, Woods said he wrote to Lt. Gen. Paul J. LaCamera, the coalition’s commanding officer, seeking a reversal of the decision to shorten strike reports.

A spokesperson for the coalition in Syria and Iraq did not return a request for comment from Mother Jones.

“In our view, this is really not the time to be reducing transparency,” Woods says. “Syrians are less likely to get accountability. And that can’t be in anyone’s interest.”