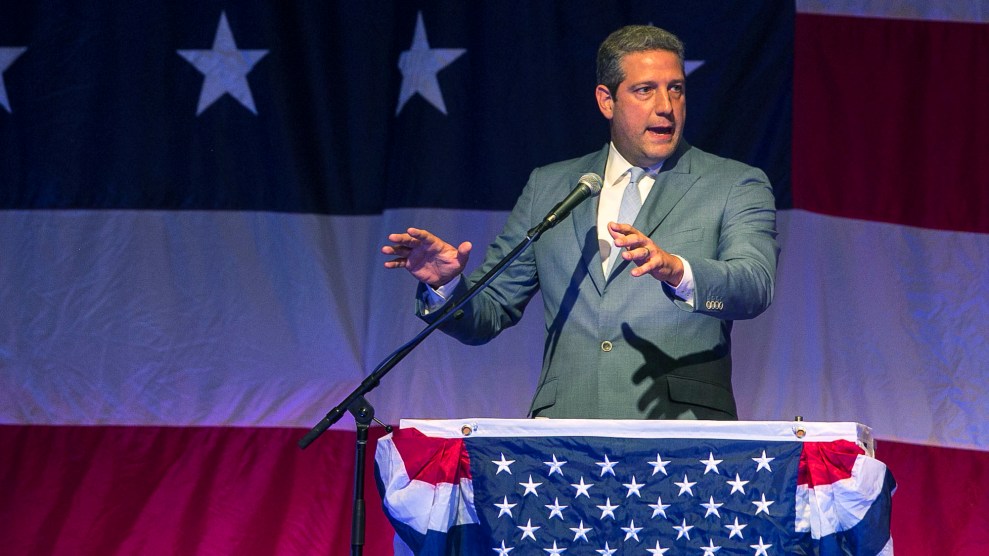 On Monday, 16 Democrats released an open letter pledging to vote against Nancy Pelosi for speaker of the House. The move didn’t come as much of a surprise. Many of the signatories—who include current and incoming members of Congress, as well as one candidate who is currently trailing his general election opponent—have long expressed a desire for new leadership in the chamber. The group’s ringleaders, Reps. Tim Ryan (Ohio) and Seth Moulton (Mass.), spearheaded a similar revolt against Pelosi two years ago, claiming that the longtime Democratic leader was out of touch with the working-class voters—once reliable Democrats—who backed Donald Trump in 2016. Ryan ran for minority leader at the time, but lost to Pelosi 134-63.

“I want the American people and Democrats to know that we’re making the changes necessary to be able to win in two years.”

Now, Ryan, Moulton, and their supporters are back at it, arguing once again that despite the huge Democratic gains in 2018, Pelosi is the wrong messenger for their party. This time around, they’re joined by a handful of newly elected House Democrats who made voting against Pelosi a key plank of their campaigns.

The uprising has sparked a fierce backlash, with critics coining the “#FiveWhiteGuys” hashtag, deriding Ryan, Moulton, and three of their most prominent allies for seeking to deny Pelosi the gavel after an election in which record numbers of Democratic women won congressional races—thanks in large part to the overwhelming support of women voters. Some liberal activists have discussed recruiting primary challengers to run against the insurgents.

#MA06 will be fun in 2020. So who wants to step up? The money will be there. @sethmoulton and the #FiveWhiteGuys are done.

Of course, not all of Pelosi’s Democratic opponents are men, and not all of them are white. And even the movement’s leaders don’t always see eye-to-eye. While Moulton has repeatedly railed against Pelosi’s effectiveness, Ryan says she was an “amazing speaker” during her four-year tenure when Democrats controlled the House from 2007 to 2010. Instead, as Ryan explained over the course of an hour-long interview in his congressional office, he sees his rebellion as one piece of a larger project he’s pursued since his last House leadership battle. His goal, he claims, is to reshape the perception of the Democratic Party in midwestern states like Michigan and Wisconsin—the so-called “Blue Wall” that Trump managed to breach by winning white voters without colleges degrees—in time for the 2020 election. Ryan, not coincidentally, is considering his own run for president, a decision he says he’ll make once the House leadership conversations subside.

“I want the American people and Democrats to know that we’re making the changes necessary to be able to win in two years,” he says. “The problem we’re having now is people have closed themselves off emotionally and intellectually to the Democratic Party in large swaths of the country.”

Ryan has a clear image of the midwestern voter he envisions when he makes that statement. “A 70-year-old Teamster who drove a truck for 40 years,” he says. “Missed birthdays, missed holidays, missed soccer matches and baseball games—all with the promise that they would get a pretty good pension when they retired. And now it’s going to get cut in half.” The rest of anecdote unfolds in the manner of most midwestern, blue-collar archetypes: Perhaps this Teamster is supporting adult children and grandchildren who aren’t making ends meet because wages are stagnant or there are fewer job opportunities for them. Maybe there’s a family member suffering from an opioid addiction. “It’s just a real economic squeeze,” he notes.

The voter he’s imagining here, of course, isn’t particular to the Midwest. Ryan paints a portrait representative of former manufacturing and mill towns all across America, something he says he’s seen in Iowa, New Hampshire, West Virginia, and Indiana—all states in which Trump made big gains two years ago. Ryan believes these voters could return to the Democratic fold if the party chooses a House leader who frames pressing political concerns in a way that speaks to their economic needs.

As an example, Ryan talks about climate change, which he considers one of the country’s most pressing issues. Some voters, he explains, readily connect with environmentalists’ concern for the planet. But, he argues, the voters he represents might be more receptive to an economic development message—one pointing out that millions of manufacturing jobs could be created through investments in renewable energy.

“We need these labor folks to have someone in our leadership that’s talking to them, caring about them, focusing on them.”

“You talk about that in the context of jobs, now all of a sudden everyone’s perking up in Ohio, Michigan, and Minnesota,” he says. “Those people will be climate voters in five years once they start getting their paychecks from that.” He points to Democratic Sen. Sherrod Brown, who was comfortably reelected this year in Ohio, as a prime example of a politician who does this effectively. “How does he win in Ohio?” Ryan asks. “Because he talks about jobs, wages, and health care.”

I remind Ryan that this doesn’t sound so different from how Pelosi talks about these issues. In fact, the House minority leader emphasized each of those items during her Capitol Hill press conference the day after the election. To that, Ryan counters that the messenger is as important as the message when it comes to repairing Democrats’ national brand.

“We raise all of our money from the coasts, and our leadership is from the coasts—[Senate Minority Leader Chuck] Schumer’s from New York and Pelosi’s from California,” he says, adding that of the Democrats currently running for the top six leadership slots in the House, only New Mexico Rep. Ben Ray Lujan hails from a land-locked state. “We need these labor folks to have someone in our leadership that’s talking to them, caring about them, focusing on them,” Ryan says. “I think it’s a real blind spot because it ends up making us look like coastal elites. We walk right into the narrative, you know?”

This ties in with Pelosi’s popularity, which is greater in some areas of the country than others—the latter of which neatly overlap with Ryan’s chief geographic concerns. He points to midwestern Democrats who flipped red districts, like Michigan’s Haley Stevens and Elissa Slotkin, in part by campaigning on an anti-Pelosi platform. “I think the door opened for them when they said, ‘I’m not supporting her, I’m not voting for her,’ and then they were able to get to their agenda,” he says.

The reality, of course, is that the future of the Democratic Party might not where Ryan imagines it is. While some Democrats made inroads in the Rust Belt this cycle, the party scored major wins in place like Arizona, Nevada, and New Mexico, as well as in highly educated and traditionally Republican suburbs in California and New Jersey.

When I bring this up, Ryan calls it a “slap in the face” to the people he represents. “I get a little bit perturbed when people start talking about this as a cold political calculus and like somehow need to just forget these people,” he says. “To say, ‘Well, let’s turn our back on the Midwest’—I mean, is that really the Democratic platform?”

Still, it’s not particularly clear how Ryan intends to accomplish his goals. Of most importance: No one has actually stepped forward to challenge Pelosi. Of the four Democrats Ryan told me he’d like to see run for speaker, none have publicly expressed interest: Cheri Bustos (Ill.) is running to chair the Democratic Congressional Campaign Committee and supports Pelosi; Hakeem Jeffries (N.Y.) is running for Democratic Caucus chair; and both Marcia Fudge (Ohio) and Karen Bass (Calif.) have so far remained mum about their intentions. (Notably, two of those four come from coastal states.)

There are also indications that the resistance to Pelosi might be eroding. Some freshmen who ran on anti-Pelosi platforms have shown signs of backing down, and several of their names were conspicuously absent from Monday’s letter.

But after 16 years in Congress, Ryan remains resolved. “I know my folks,” he says. “I know what’s happening, and I know how to fix it.”