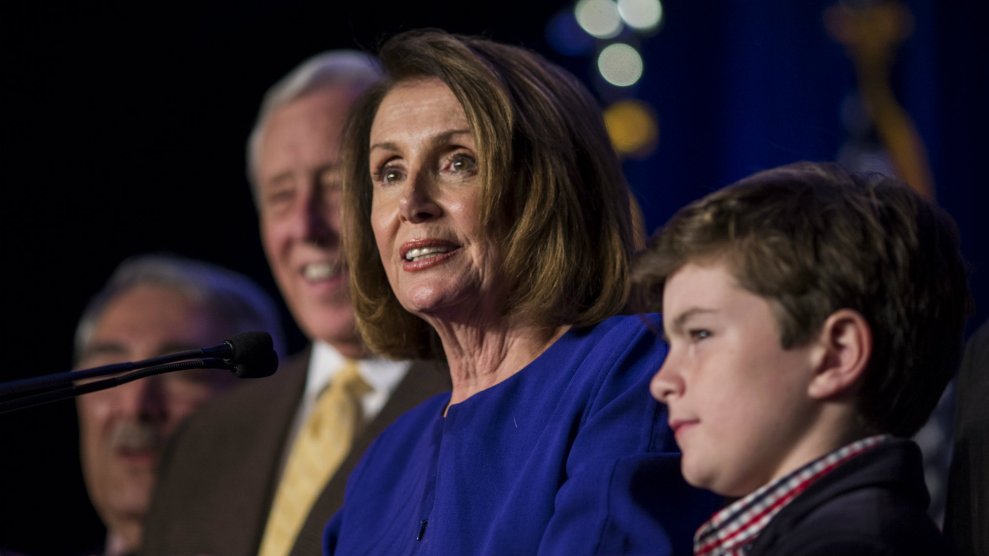 “Health care was on the ballot, and health care won,” she told reporters during a Wednesday briefing. “The biggest winner yesterday was health care for the American people, for our seniors, and for American families.”

The emphasis on kitchen table issues from the House’s presumptive speaker was not surprising given the focus of Democratic ads during the final midterm stretch and the successful ballot initiatives in three states to extend portions of the Affordable Care Act to 300,000 people. During Pelosi’s previous four-year term as speaker, her defining achievement was shepherding the ACA through the House.

The prominence of health care on the stump came in direct opposition to Trump’s closing strategy—hyping an imagined threat from a migrant caravan still thousands of miles away and harping on Democratic opposition to Brett Kavanaugh’s Supreme Court nomination. “Public sentiment” would be Democrats’ biggest ally in the new Congress, Pelosi said.

Rather than outline the investigations Democrats might pursue with subpoena power, Pelosi struck a conciliatory tone, saying she had spoken with Trump about addressing national infrastructure needs. Committee chairs won’t be “scattershot freelancing,” she added, referring to politically motivated actions taken outside of the committee process. (Hello, Devin Nunes.) Among the Democratic majority’s goals, Pelosi said, will be to “restore the health of our democracy” and maintain integrity in government by reducing the role of “dark money” in the electoral system.

.@NancyPelosi says don't expect Darrell Issa 2.0: "We have a congressional duty to oversight" BUT "I don’t think we’ll have any scattershot freelancing." "We are trying to unify our country… When we go down any of these paths we’ll know what we’re doing and we’ll do it right."

Pelosi declined to address reports that her speakership lacks support from some freshman members, instead highlighting her skills as a negotiator and a bridge builder. “I’d rather answer questions about policy,” she said. “The rest will speak for itself.”