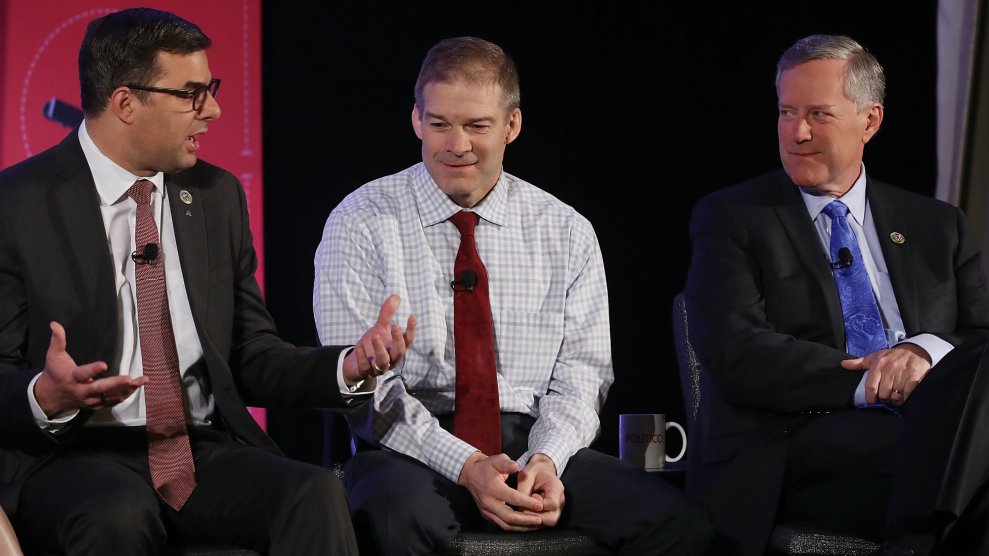 For the first time in eight years, the House of Representatives has turned blue. When the next speaker takes the gavel in January—whether it’s Rep. Nancy Pelosi (D-Calif.), as is widely assumed, or someone else—they will preside over the most diverse and progressive Democratic caucus in history, counting among their majority five Muslim women, the youngest woman ever elected to Congress, and the first black female representative from Massachusetts.

Sitting across the aisle from this energized group of freshman lawmakers will be the most partisan, unabashedly radical group of Republicans ever assembled in the House. With no interest in challenging Trump, this newly elected crop of Republicans is expected to include more members of the far-right Freedom Caucus than took office in 2016. Instead of Paul Ryan, who at least occasionally was able to question Trump publicly, the Republicans will have a minority leader fight ahead of them between two loyal allies of the president: Rep. Kevin McCarthy (R-Calif.), who is so close to Trump that the president calls him “my Kevin,” and Rep. Jim Jordan (R-Ohio), the lead proxy warrior for Trump’s attacks on the Justice Department and Deputy Attorney General Rod Rosenstein.

Far-right lawmakers like Dave Brat of Virginia and Rod Blum of Iowa may have lost in districts Trump narrowly won in 2016, but the Freedom Caucus added seven new members—eight, if Mark Harris wins in North Carolina, where he leads by 0.7 percentage points with all precincts reporting. If Dana Rohrabacher ekes out a victory in California’s 48th District, where he trails challenger Harley Rouda by 1.5 percentage points, the caucus will have its 36th member, two more than it enjoyed during the beginning of Trump’s first term, according to a Mother Jones analysis of current members and victorious candidates who received funding from the political action committee aligned with the group.

The legislative influence of these insurgent members may sink “to near zero in a Republican minority,” as Politico predicted Wednesday morning, but, like the president they have joined at the hip, few caucus members have shown an inclination to play by the normal rules of politics. When I reported on the Freedom Caucus in September, Nadeam Elshami, former chief of staff to House Democratic Leader Nancy Pelosi, predicted the group would splinter an already weak Republican conference. “You could see the conference moving even further to the right, which would give power to those Republicans who would be willing to negotiate and talk to Democrats to pass bipartisan legislation,” he said.

In the event McCarthy takes the reins as minority leader in January, Jordan’s band of troublemakers could prevent him from unifying in opposition to the Democratic majority. Fear of splitting the caucus ought to give Jordan an important role setting party strategy—title or not.

Trump’s domination of the Republican Party has left no room for conservatives like Rep. Mark Sanford (R-N.C.), a Freedom Caucus member who lost a primary to a candidate aligned with the president, or moderates like Rep. Ryan Costello (R-Penn.), who declined to seek reelection in a southeastern Pennsylvania district that, after redistricting, would not have favored him. In a tweet Wednesday morning, he lamented Trump’s effect on the GOP:

To deal w harassment & filth spewed at GOP MOC’s in tough seats every day for 2 yrs, bc of POTUS; to bite ur lip more times you’d care to; to disagree & separate from POTUS on principle & civility in ur campaign; to lose bc of POTUS & have him piss on u. Angers me to my core.

Favorable redistricting has left some outspoken Freedom Caucus members, such as Jordan, free to attack and intimidate members of their own party with little risk of an electoral penalty. That structural advantage will only get stronger as more centrists flee Capitol Hill or gear up for difficult reelection fights.

Trump certainly has not offered them an olive branch. During a raucous press conference Wednesday morning, he recited the names of Republican candidates who lost and suggested they would have won if only they had reached out for his support. “Too bad Mike,” Trump said at one point, referring to Rep. Mike Coffman’s loss in Colorado. “Sorry about that Mia,” he said of Rep. Mia Love, whose race in Utah has not been declared yet. (“There are still tens of thousands of ballots still to be counted. Nothing has changed,” her campaign spokesperson, Sasha Clark, told the Deseret News.)

With an eager base that helped Republicans flip three Senate seats in red states—four, if Gov. Rick Scott ends up winning in Florida—Trump has no incentive to appease centrists. While the Freedom Caucus grows in size, the moderate Tuesday Group has seen its ranks contract. Rep. Charlie Dent, another Pennsylvania Republican who declined to seek reelection for a seat that ultimately flipped to a Democrat, told the New Yorker last week why members of his party are so reluctant to buck Trump’s marching orders. “I can answer in one word,” he said. “Fear.”