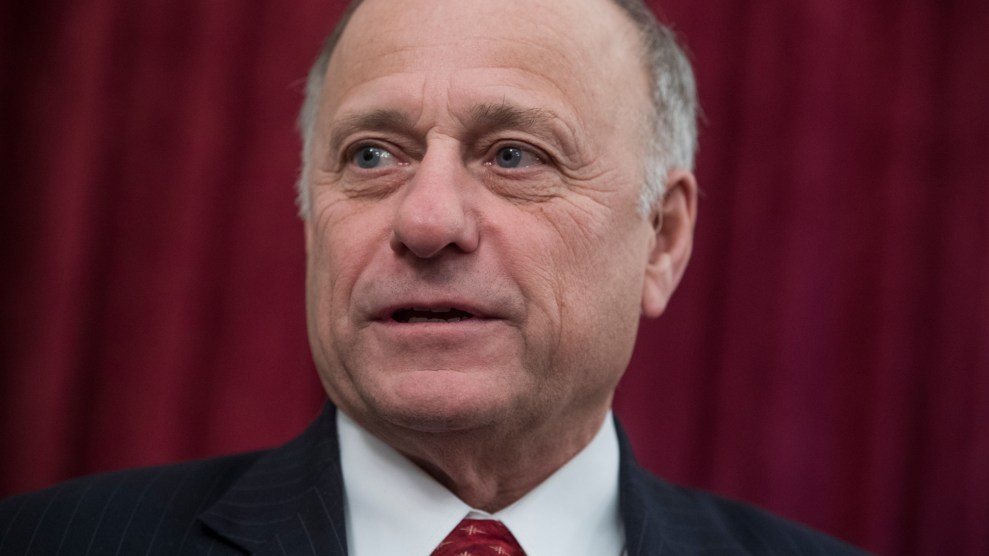 Rep. Steve King, R-Iowa, attends a rally for Iowans prior to the anti-abortion March for Life on January 19.Tom Williams/CQ Roll Call/AP Images

For years, Republican leaders have turned a blind eye to Iowa Rep. Steve King’s countless racist and anti-immigrant comments. But on Tuesday, as King faced a fresh wave of controversy—and as he appeared to be in more danger than ever of losing his seat—National Republican Congressional Committee Chairman and Ohio Rep. Steve Stivers finally condemned the Republican congressman in a strongly worded tweet.

Congressman Steve King’s recent comments, actions, and retweets are completely inappropriate. We must stand up against white supremacy and hate in all forms, and I strongly condemn this behavior.

On Friday, King’s conservative hometown paper, the Sioux City Journal, broke with tradition to endorse his rival Democrat J.D. Scholten, a former professional baseball player and paralegal, in the race for King’s seat. And this week, corporate donors Intel and Land O’ Lakes announced they would stop funding King’s campaign in light of his recent actions.

King is no stranger to controversy—the eight-term congressman has a long history of making offensive comments about immigrants and supporting politicians with fringe views. But that hasn’t stopped him from holding onto his congressional seat in this agriculture-heavy district; in the last election, he won by 23 points. The closest a Democrat ever came to unseating him was in 2012, when King beat Christie Vilsack by 8 points.

But on Monday, a poll by the left-leaning group Change Research showed Scholten trailing by just 1 point. Shortly after, King’s campaign released a separate poll, conducted just several days before by Republican group WPA Intelligence, which showed the congressman up by 18 points. The competing polls make it hard to tell how much danger King is really in—a nonpartisan poll in September showed King with a 10-point lead.

Still, Scholten is leading an energetic fight, outraising his opponent by nearly $1 million: The most recent Federal Election Commission filings show that Scholten has raised $1.73 million, while King raised just $739,553. While Scholten says he’s visited each of the district’s 39 counties three times, King has refused to even debate his opponent.

Scholten’s campaign has seized on King’s absence as a campaign issue, releasing a trio of ads this week that attack the congressman for his offensive comments and criticize him for taking overseas trips and not “showing up” in the district. The ads emphasize his support for farmers in this agricultural region, which has been affected by retaliatory Chinese tariffs in President Donald Trump’s ongoing trade war. And they feature a host of Republican voters who criticize King—an attempt to win over conservatives in this stubbornly red district.

But while King’s future looks more uncertain than ever, Scholten still faces an uphill battle: The district went for Trump by 27 points in 2016, and FiveThirtyEight still gives King a 5-in-6 chance of keeping the seat.