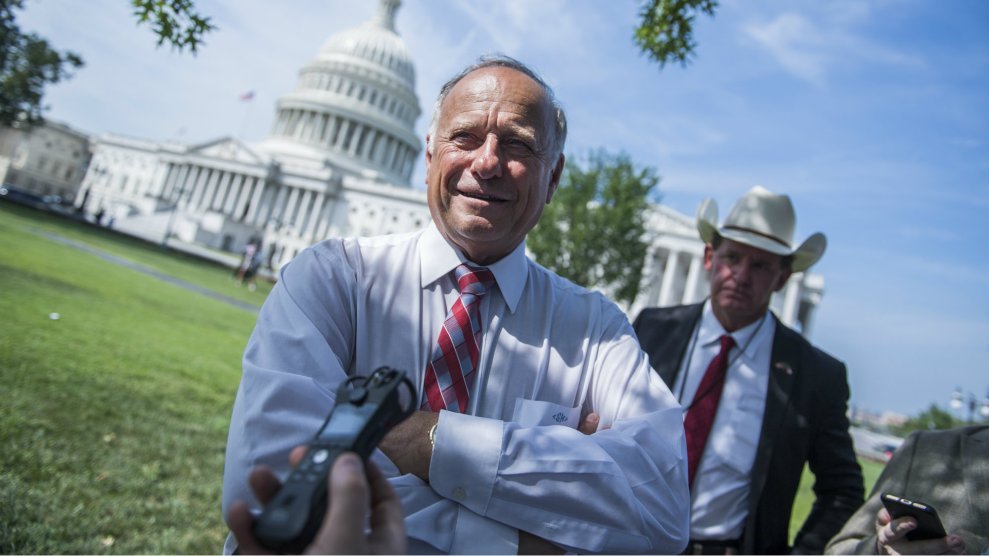 Longtime Iowa congressman Steve King retweeted a white nationalist on Wednesday, and not for the first time.

King, who has 98,000-plus Twitter followers, shared a tweet from Lana Lokteff, a radio and YouTube personality who identifies herself as “identitarian” and pro-European. On her Radio 3Fourteen show, Lokteff has defended the idea of a majority-white state and interviewed Holocaust denier Mark Weber. “For me,” she told Rolling Stone, “looking into these things doesn’t mean, ‘Oh, I hate Jews.’ It’s like, ‘This many Jews didn’t die, alright?'”

“Nazi” is injected into Leftist talking points because the worn out & exhausted “racist” is over used & applied to everyone who lacks melanin & who fail to virtue signal at the requisite frequency & decibels. But…Nazis were socialists & Leftists are socialists https://t.co/0SkC2a4Y2l

In December, Lokteff interviewed two right-wing journalists for a video titled, “Dear Cucks, Only One Kind of Nationalism Will Save the West,” during which she expressed support for ethno-nationalism. “We want the natives to be the majority,” she said. “There will be some people that aren’t of that native stock, but they need to be a smaller percentage of the population, correct? Right?”

King has been criticized several times for unashamedly boosting white nationalist voices on Twitter. In one post, last March, he praised far-right Dutch politician Geert Wilders, who “understands that culture and demographics are our destiny. We can’t restore our civilization with somebody else’s babies.”

In June, King retweeted a self-proclaimed Nazi sympathizer and later said he did not “feel guilty one bit” about letting the tweet stay up. (A spokesperson for King was not immediately available to comment on the latest retweet and whether it would remain.)

Lokteff, though, has already used the resulting fracas to promote her work. Just hours after King retweeted her, Lokteff fired off a series of posts defending her beliefs and mocking people who have tried to shame her “for being pro-European people.”

I am a 'KNOWN huWhite supreeeeeemist.'

Also a mother, wife, and normal woman speaking the obvious in a world gone mad! https://t.co/s5wtI5poIq

I find it entertaining when the MSM in unison tries to shame me publicaly for being pro-European people. Loving White people does not equal hating everyone else. Straw man and really just childish.https://t.co/ACoKsMXIZ3