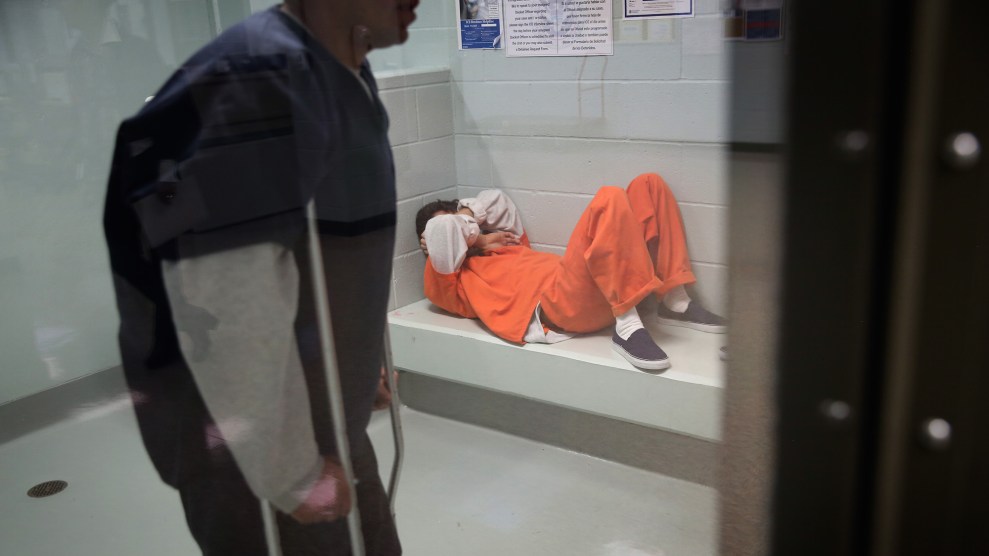 Inside an immigration detention center in the desert outside Los Angeles, guards threw detainees into solitary confinement without hearings, routinely forced them into shackles, and cut off visits with family. Doctors signed off on medical assessments that never happened. Detainees were allowed to hang knotted sheets inside their cells, despite the facility’s extensive history of suicide attempts. And an extraction-happy dentist refused to fill cavities while suggesting detainees floss with threads pulled from their socks.

These were just some of the conditions inside the Adelanto Detention Facility when federal inspectors from the Department of Homeland Security arrived for a surprise visit in May, according to a searing report released today by the DHS Office of the Inspector General. Investigators concluded that conditions at the privately run facility amounted to “serious” violations of Immigration and Custom Enforcement’s own detention standards, representing “significant threats to the safety, rights, and health of detainees.”

Few of the government’s findings about Adelanto are surprising, given that many of the same complaints about health care and suicide risks have been made for years by concerned advocates and public officials. But the report’s graphic details—from the bed sheets to the dentist’s remarks—powerfully illustrate the severity of the detention center’s long-running violations.

One detainee told inspectors that he had seen multiple people attempt suicides using knotted sheets. “The guards laugh at them and call them ‘suicide failures’ once they are back from medical,” the detainee said.

That history includes last year’s rash of suicide attempts and deaths at the 1,940-bed complex, which is operated by the GEO Group, the nation’s largest private-prison company. (Under a contract extended in 2016, the federal government pays GEO a guaranteed $113.51 per detainee per day for the first 1,455 immigrants held at the facility. For the hundreds of immigrants locked up over that minimum, ICE pays GEO $43.77 per day.) According to the report, at least seven detainees attempted suicide between December 2016 and October 2017, including a Nicaraguan immigrant named Osmar Epifanio Gonzalez-Gadba, who had been held at Adelanto for three months. In March 2017, he used a bed sheet to hang himself in his cell and died in intensive care at a local hospital a few days later.

Yet as of the inspection this May, ICE officials continued to allow detainees to hang knotted bed sheets inside their cells—often for privacy around toilets or bunk areas—in “disregard for detainee health and safety,” the investigators concluded. One detainee told inspectors that he had seen multiple people attempt suicides using the sheets. “The guards laugh at them and call them ‘suicide failures’ once they are back from medical,” the detainee said.

Inspectors also found deficiencies in medical care—another long-running issue. As Mother Jones has previously reported, 28 members of Congress demanded in 2015 that federal inspectors look at health and safety concerns at Adelanto after ICE’s Office of Professional Responsibility ruled that the 2012 death of detainee Fernando Dominguez was the result of “egregious errors” by the center’s medical staff. Also in 2015, hundreds of detainees went on hunger strike, protesting poor medical and dental care, among other issues.

As of May, inspectors found, waiting times for medical care at Adelanto could stretch on for months. Even then, appointments were often canceled because there were not enough guards to accompany detainees to the clinic. The center’s two dentists hadn’t filled a cavity or performed a cleaning in four years, opting to pull teeth instead—sometimes the wrong ones, a detainee told inspectors. Meanwhile, investigators observed nurses, doctors, and mental-health providers performing “cursory walkthroughs” of the disciplinary segregation area, signing off on medical assessments without talking to detainees.

The center’s two dentists hadn’t filled a cavity or performed a cleaning in four years, opting to pull teeth instead—sometimes the wrong ones, a detainee told inspectors.

Medical care wasn’t the only problem with Adelanto’s disciplinary segregation system, a form of solitary confinement used as punishment for detainees who have broken facility rules. At the time of the inspection, each of the 14 detainees being held in disciplinary segregation had been placed there before receiving a misconduct hearing, “violating the detainees’ right to due process,” the report concluded. They had automatically lost access to visiting family and to the detention center’s commissary, and they were routinely shackled any time they left their cell—all measures inspectors deemed inappropriate. Half the detainees had never received disciplinary panel decisions at all.

In one case, a man who uses a wheelchair had requested to stay in a less-severe form of isolation known as administrative segregation—but was instead left alone in a disciplinary segregation cell for nine days. “Based on our file review, in those 9 days, the detainee never left his wheelchair to sleep in a bed or brush his teeth,” inspectors wrote. “During our visit, we saw that the bedding and toiletries were still in the bag from his arrival.” In another, a blind detainee with limited English proficiency was put in disciplinary segregation but not given any aids or translated materials to explain his rights or why he was being punished.

Asked to comment on the Inspector General’s Office findings, a spokesman for the GEO Group referred questions to ICE. The agency, for its part, has “concurred” with the report, promising to schedule an additional inspection to make sure the problems are solved by January 2019.

But Liz Martinez, director of advocacy and strategic communications for Freedom for Immigrants, an anti-detention nonprofit that has monitored and advocated to close Adelanto, noted that the detention center’s reputation for poor conditions and frequent fatalities have lasted years. “Without real consequences,” she said, “ICE and the GEO Group will continue to operate with impunity.”