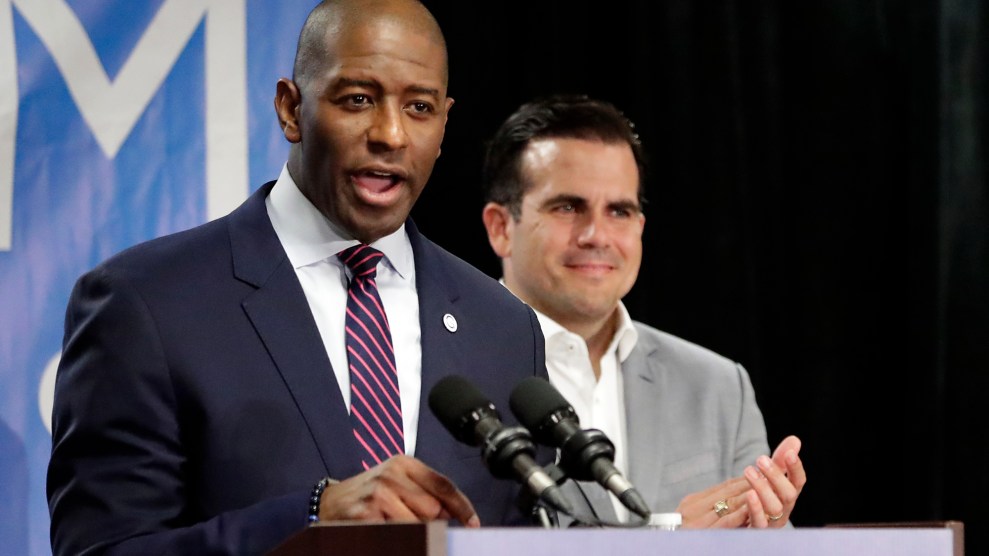 Andrew Gillum speaks to supporters after he was endorsed by Puerto Rico Gov. Ricardo Rosselló during a campaign rally Monday. John Raoux/AP

Puerto Rico Gov. Ricardo Rosselló endorsed Florida’s Democratic candidates for governor and senator Monday, following months of intense campaigning by politicians hoping to win over the tens of thousands of Puerto Ricans who fled the island after Hurricane Maria.

At a press conference with Democratic Sen. Bill Nelson, Rosselló said he was backing the incumbent’s reelection bid against Republican Gov. Rick Scott because he was “grateful for his longstanding relationship for the people of Puerto Rico,” specifically citing Nelson’s support for Puerto Rican statehood and federal benefits. He described the endorsement as a “tough decision”; Scott has made eight trips to the island since the hurricane hit and said Monday he’s earned the support of 59 Puerto Rican officials.

Later in the day, Rosselló announced his endorsement of Andrew Gillum, the Tallahassee mayor and Democratic nominee for governor, who’s in a close race against former Republican congressman Ron DeSantis.

As Mother Jones‘ AJ Vicens has reported, Democrats are working hard to get Puerto Ricans in Florida to turn out this November, but still have significant obstacles to overcome:

More than 1 million of the roughly 5.6 million Puerto Ricans living on the US mainland are in Florida. Steve Schale, a former Florida Obama campaign strategist, says Puerto Rican voters, largely concentrated in central Florida counties surrounding Orlando, could be a “nice big chunk” of a winning coalition.

But nearly a year after the hurricane made landfall, it’s not clear that those voters…will materialize. Florida voter registration data shows only a small uptick in overall Hispanic voter registration; according to an analysis by the Washington Post, the increase isn’t necessarily due to new Puerto Ricans.

As US citizens, Puerto Ricans are eligible to vote in Florida if they establish residency, but many Puerto Ricans in the state still don’t have permanent addresses, and people whose lives were upended by the hurricane may have other priorities besides voting, one voter registration activist told Mother Jones. The governor’s announcement comes in the midst of a big push among activists to register Latino voters in the state.