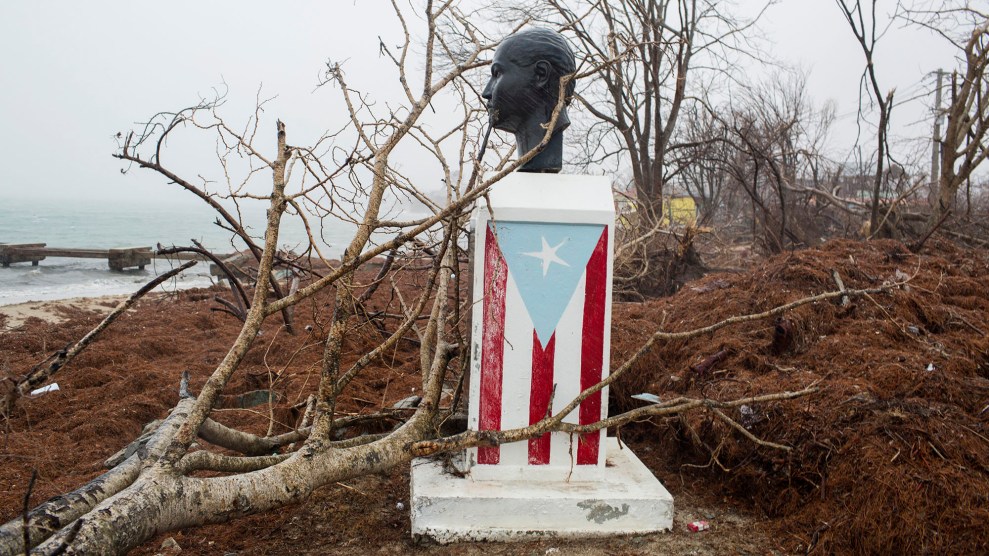 When Florida Gov. Rick Scott announced his 2018 bid challenging Democratic Sen. Bill Nelson in April, he took the stage in an Orlando construction company warehouse, his trademark NAVY cap topping his hairless head. Scott offered the crowd some boilerplate aimed at faraway politicians: “We can change Washington” and “let’s get Washington to work.”

But he also singled out a public official who’d traveled much further—1,200 miles—to stand at his side.

“I want to thank Luis for being here,” Scott began, referring to Luis Rivera Marín, the Puerto Rico secretary of state, before nodding to Marín’s fellow islanders who fled the wrath of Hurricane Maria and now call Florida at least their temporary home. “This is a great state, this is the melting pot of the world…Thank God there’s so many Puerto Ricans that have come.”

“We need to demonstrate that we have a hammer.”

The influx of Puerto Ricans—who as US citizens, unlike other migrant communities, can register to vote as soon as they establish residence—has politicians, particularly Florida Democrats, salivating. And it has, in some Puerto Ricans, renewed a vision of a unified voting bloc powerful enough to lobby for the island territory’s well-being and possible statehood. “We need to demonstrate that we have a hammer,” explained Puerto Rico Gov. Ricardo Rosselló to Politico in early April.

While estimates vary, Rep. Nydia Velázquez (D-NY), a longtime advocate for Puerto Rico in Washington, says 180,000 islanders fled after the hurricanes. “Puerto Ricans remember this administration’s anemic response to the hurricane and Donald Trump’s offensive photo shoot when he threw paper towels at people,” she says, arguing that voters who share her Puerto Rican heritage will punish the GOP for the administration’s inaction and Maria’s estimated 3,000 victims—a number Trump falsely insists was fabricated by Democrats. “Puerto Ricans will be voting, and they will make their voices heard.”

3000 people did not die in the two hurricanes that hit Puerto Rico. When I left the Island, AFTER the storm had hit, they had anywhere from 6 to 18 deaths. As time went by it did not go up by much. Then, a long time later, they started to report really large numbers, like 3000…

…..This was done by the Democrats in order to make me look as bad as possible when I was successfully raising Billions of Dollars to help rebuild Puerto Rico. If a person died for any reason, like old age, just add them onto the list. Bad politics. I love Puerto Rico!

Scott’s defensive maneuvers at his announcement highlight the opportunity Democrats have spotted. More than 1 million of the roughly 5.6 million Puerto Ricans living on the US mainland are in Florida. Steve Schale, a former Florida Obama campaign strategist, says Puerto Rican voters, largely concentrated in central Florida counties surrounding Orlando, could be a “nice big chunk” of a winning coalition.

But nearly a year after the hurricane made landfall, it’s not clear that those voters, or Rosselló’s “hammer,” will materialize. Florida voter registration data shows only a small uptick in overall Hispanic voter registration; according to an analysis by the Washington Post, the increase isn’t necessarily due to new Puerto Ricans.

Rafael Collazo, the Philadelphia-based director of political campaigns for UnidosUS (formerly the National Council of La Raza), says his group plans to register 45,000 Latino voters in Florida, with more than half coming from the central part of the state, where he estimates a “majority” of new registrants have roots on the island.”If we’re going to try to mobilize people who have come here after Maria, it’s going to require real effort on the ground to go out and find these voters and make sure they’re registered,” adds Schale. “If you look just at the registration numbers from the Secretary of State’s office, you’re not seeing any real movement.”

“The challenge is finding them and connecting with them at a point in their process where they feel comfortable registering to vote,” he says, pointing out that many lack permanent addresses and may be focused on basics like housing and jobs.

“It’s going to require real effort on the ground to go out and find these voters.”

Deepak Lamba-Nieves, the research director at the Center for a New Economy in San Juan, says that for new arrivals, choosing a political party isn’t as obvious as it might seem. Puerto Rico’s party system is oriented around the deeply fraught questions of whether to seek independence, statehood, or maintain the status quo, a debate that doesn’t map neatly with the mainland’s major parties.

“Somebody who migrates, they may fill all the boxes that seem like they’re a Democrat,” Lamba-Nieves says. “We’re poor. We’re brown. We are fighters, workers. We’re struggling. But in many ways, there’s a very conservative mindset and idiosyncrasies on the island.” Indeed, data from Osceola County, where many post-Maria migrants settled, showed that of the county’s more than 12,000 new voters, 9,200 registered as independents.

Republicans aren’t giving up these new voters without a fight. Scott has traveled to the island seven times since Maria and has invested heavily in Spanish-language advertising. The Libre Institute, funded by the Koch brothers, has organized right-leaning “civics lessons” on the US political system for new arrivals. At a gathering of Florida Puerto Rican civic leaders in May, flyers bearing the logo of the Republican Party of Florida were distributed that claimed, among other lurid attacks, that Democrats have “an extremist record of placing the rights of criminals above all.” (The Florida GOP did not respond to questions about the flyers.)

Republicans aren’t giving up these new voters without a fight.

The Democratic National Committee sent the state party a $100,000 grant earlier this summer to bolster engagement efforts and followed up with an additional $52,000 to hire more organizers in minority communities. The national party has also collected lists of Puerto Rican cellphones now being used in Florida, numbers Democrats plan to target.

“You can’t take a community for granted and assume their political affiliation one way or the other. You have to earn it,” says Sabrina Singh, a deputy communications director with the DNC. “We have a really good case to make to them, but we have to do it every day, organize on the ground, and make sure we are coordinating between groups and us and others. And that’s exactly what we’re doing.”

But Gov. Rosselló’s vision of a unified “hammer,” an organization dubbed “Poder Puerto Rico” (Power Puerto Rico), hasn’t materialized as he’d promised. When Rosselló launched the organization in April, he said it would offer “recommendations” of candidates friendly to the island and register the thousands of Puerto Ricans living in places like Florida, Texas, New Jersey, and New York.

Luis Figueroa, a former Puerto Rican government official based in Florida who was tapped to lead Poder, told Mother Jones that progress “has been very slow.” As of August, Figueroa said Poder’s site had guided just 2,800 people through the process. As for endorsements? “As long as they vote, they can vote for whoever they like,” he says.

Edwin Meléndez, a researcher at Hunter College who has studied past efforts to organize the diaspora, warns that an organization so closely linked to Rosselló—a staunch proponent of statehood—may not be able to mobilize the mainland’s Puerto Ricans. Differences over the island’s territorial status “are substantial and sometimes hard to reconcile,” he says. “Speaking with one voice is not going to happen.”

This article was updated to include Trump’s false claim about the storm’s death toll.