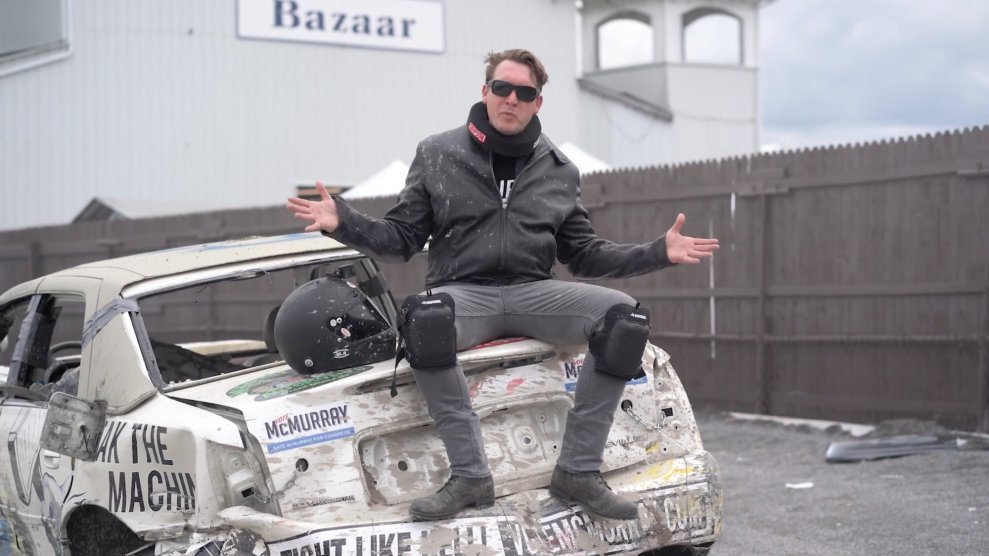 “Western NY deserves a strong and independent voice—and a Congressman who can take a few hits,” McMurray wrote on Facebook after emerging from his battered car.

Politicians generally don’t participate in vehicle-on-vehicle combat, but McMurray’s wild ride around that dirt-lined arena was also symbolic. As he frequently points out, he is someone eager and able to “break the machine.”

That three-word phrase has been McMurray’s rallying cry since the start of his unlikely campaign in January, when no respectable election prognosticator would have given him even a remote chance of unseating Collins. “I don’t think anyone knew the challenger’s name,” Jacob Neiheisel, an associate professor of political science at the State University of New York, tells Mother Jones.

“I don’t think anyone knew the challenger’s name.”

Even as the Office of Congressional Ethics probed Collins’ investment activity and federal agents neared closer to filing an indictment, the three-term congressman appeared to be one of the safest Republican incumbents in what pollsters were predicting would be a wave election for Democrats. He had tethered his political fortunes to President Donald Trump and was the first sitting congressman to endorse his presidential bid. And he was running for reelection in a district the president won by 24 points.

McMurray, whose only political experience came as supervisor of Grand Island, a small town outside the 27th District’s boundaries, ran unopposed for the Democratic nomination. Despite having little money and equipped with only a skeleton crew of campaign staff—culled from Bernie Sanders rallies and part-time jobs at beer distributors—he ventured into the general election eager to “fight like hell” (another of his favorite lines) and make Collins work during the campaign.

BREAK THE MACHINE. Yep, I’m gonna keep saying it. Because if you think a system that relies on so much corp money, leaves so many out, and elects candidates, like my opponent (with such serious ethical lapses) works, well I don’t agree. Remember, potus won. Lets break it/rebuild

Then, during his morning run on August 8, everything changed. As he and the rest of the world would soon learn, 68-year old Collins had been indicted for insider trading in a scheme related to an Australian pharmaceutical company. Three days later, Collins announced he was suspending his campaign. With no discernible opponent in sight, the once-unthinkable prospect of turning New York’s 27th District blue in 2018 seemed significantly more attainable. The national Democratic Party apparatus, coupled with a legion of small donors, responded in kind.

On July 16, McMurray reported less than $47,000 in donations from the preceding quarter. Two months after Collins’ indictment, he had raised 11 times that amount and earned a spot on the Democratic Congressional Campaign Committee’s exclusive “Red to Blue” list, which guarantees organizational support for candidates who have the potential to flip a district from Republican control. Party bigwigs, including Democratic National Committee Chairman Tom Perez and former Vice President Joe Biden, have campaigned for McMurray in recent weeks as well. “I grew up with people very similar to the residents of this district, not that far from here,” Biden said in a statement released by McMurray’s campaign. “Folks here put country before party because they know that it’s the right thing to do. And that’s why I’m proud to support Nate, because he’ll fight for those families, every day, and give them the kind of Representative they deserve.”

Like other red-district Democrats, McMurray speaks a language familiar to voters in the Rust Belt who gave Trump the support he needed to beat Hillary Clinton in states like Michigan, Wisconsin, and Pennsylvania. The Democrats, McMurray tells Mother Jones, are “terrible at messaging” and need leaders—not Nancy Pelosi, he makes clear—who will prioritize economic justice and a party platform union voters can love again. McMurray’s own platform contains standard progressive initiatives—Medicare for all, marijuana legalization, and net neutrality—moderated at least in tone if not substance for the conservative voters in his district. Earlier in his campaign, McMurray’s website trumpeted his support for universal background checks, restrictions on bump stocks, and other policies that might cost him votes in a district that contains 40,000 more registered Republicans than Democrats. That tab on his website now goes to a dead link. (A spokesperson for McMurray’s campaign said his platform “had been down for some editing” but is now online at another link.)

Initially, McMurray’s campaign built up name recognition through a series of stunts—like the demolition derby video—but he has now prioritized old-fashioned rallies and diner stops. Radio has been another favorite tool. Neiheisel said McMurray has been interviewed on WBEN, a local talk radio station, “almost every other day, it seems.”

On the airwaves, McMurray just released his third ad, which features members of a “Republicans for Nate” steering committee, the campaign announced last week. He also became the only Democrat endorsed by the conservative New York Post editorial page—in a way that was less a support of McMurray than a rejection of Collins. “Republicans can try to retake the seat in 2020,” the editorial drily noted. McMurray wasted no time turning the nod from a conservative outlet into fodder for his supporters. “Voters from all backgrounds can’t run away fast enough from Chris Collins,” he announced in a press release soon after the newspaper published its endorsements.

The first major poll taken in the district, conducted by Siena College from October 6 to 11, gave Collins a slight lead within the margin of error and included a morsel of rosy news for McMurray: 49 percent of voters held an unfavorable rating of Collins. The recognition gap still remained, though: 48 percent of respondents, including 40 percent of self-described Democrats, offered no opinion of McMurray or said they didn’t know who he was.

When Collins, who has largely stayed off the campaign trail since reentering the race, asserted his candidacy recently, it backfired. Last month, in an ad widely panned as xenophobic, the Collins campaign depicted McMurray speaking Korean and posited that he “helped American companies hire foreign workers.” McMurray’s wife is South Korean, and he spent nearly two decades traveling between the United States and Asia, where he studied law on a Fulbright scholarship and later worked as an attorney. Thomas Pinansky, the senior foreign partner at a law firm that employed McMurray in Seoul, called the ad “ridiculous” in an interview with the New York Times. “Of course, he’d have no authority to send jobs anywhere,” Pinansky said. “He was just trying to make a very highly regulated market more liberalized and open for US businesses.” Rep. Ted Lieu (D-Calif.) used much harsher language to describe the ad on Twitter:

Dear @RepChrisCollins: Take your racist ad and shove it. You are an embarrassment to the House of Representatives.

For folks who get angry after watching the racist ad, go to @Nate_McMurray website at https://t.co/wlQ5N8Zczv and help Nate. https://t.co/MBpOuZ9pvb

McMurray told Mother Jones he found the ad ironic, given Collins’ own colorful business history. After founding a manufacturing company and serving as Erie County executive, Collins went on to become one of the richest members of Congress by investing in a range of global biotech and pharmaceutical firms, such as Australian drug manufacturer Innate Immunotherapeutics. As an Innate board member, Collins allegedly learned that the clinical trial for one of the company’s promising new products had failed, according to federal court filings. Instead of keeping the information private, he told his son, another Innate shareholder, who, in turn, shared the tip with other associates, ultimately saving Collins’ friends up to $768,000 in potential losses. Collins has denied the charges and is not expected to go to trial until February 2020.

While local Republicans would have preferred to see another candidate contend for the seat, they have kept up the pressure on McMurray by hosting a “Red Tide Rising” rally this week headlined by former White House chief strategist Steve Bannon. Collins did not attend, but campaign adviser Chris Grant told the Wall Street Journal that Collins was emphasizing party unity. “Will voters choose a liberal Democrat who is going to side with Andrew [Cuomo] and Nancy Pelosi, or are they going to vote for a proven, conservative Republican who is going to stand with the president and support his policies?” Grant told the newspaper.

As for McMurray, the impact of long days criss-crossing the district, which includes large rural segments in addition to parts of the Buffalo and Rochester suburbs, does not appear to have sapped his enthusiasm, though he acknowledged one downside of the frenetic campaign lifestyle.

“My car needs an inspection,” he said. “It’s three months past due.”