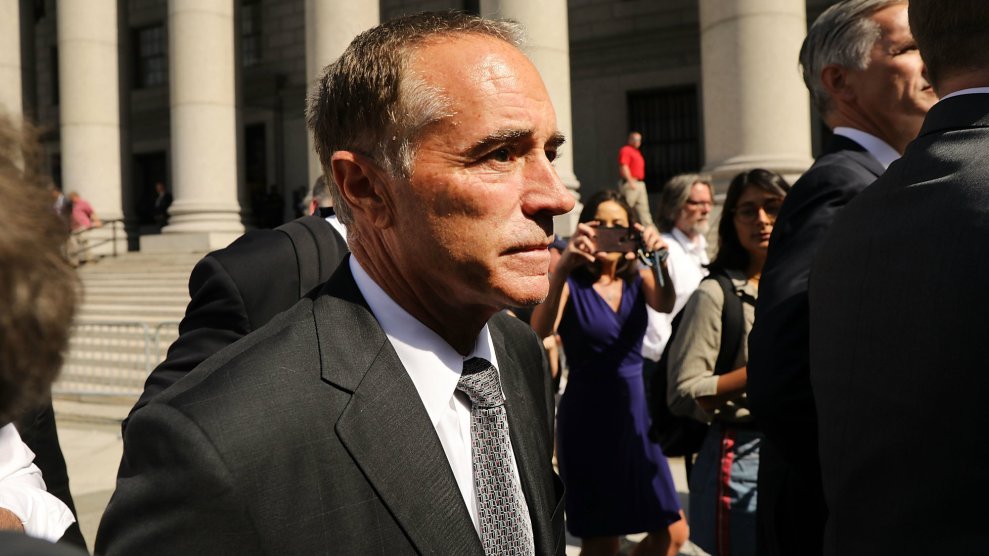 Since Rep. Chris Collins (R-N.Y.) was indicted on insider trading charges in August, donations to his reelection campaign have plummeted, according to his latest quarterly filing to the Federal Election Commission this month.

The National Republican Congressional Committee cut him off, resulting in a 71 percent drop-off in donations from July. Nonetheless, Collins still clings to a lead in his ruby-red upstate New York district.

The three-term incumbent still has his supporters. On September 29, he reported receiving $1,000 from Pharmaceutical Research & Manufacturers (PhRMA), an industry trade group. This was less than eight weeks after he had been charged in an insider trading conspiracy that centered around a pharmaceutical company where he served as a board member. Collins has denied the charges and remains on the ballot, because of some quirky state election laws that makes it all but impossible for the party to remove him. He is not expected to stand trial until February 2020.

Holly Campbell, a spokesperson for PhRMA, disputed this report in an email to Mother Jones, noting that the group’s own filings show a donation being made to Collins on July 31. “It’s also odd that their filing has aggregate [donations] from PhRMA at $2062.50,” she added. “As you can see in our report, all of our contributions are round numbers. So something does not seem right there…”

The Collins campaign did not respond to a request for comment.

No matter the timing of the donation, it did not go unnoticed by Collins’ Democratic challenger, Nate McMurray, the 43-year-old town supervisor of a small community near Niagara Falls.

“Let me get this straight: Chris Collins sat on the board of a drug company, then conspired to make sure he didn’t lose money when a drug trial failed, then lied about it to the FBI, then decided he’d run for re-election because his lawyers thought it would keep him out of jail and now the only financial support for his campaign comes from pharmaceutical special interests?” McMurray, 43, said in a statement. “If it wasn’t so shameless, it would be unbelievable.”

Once considered a Republican lock, Collins’ seat in New York’s 27th District, which includes the suburbs of Buffalo and Rochester, is now a ripe Democratic target. McMurray, who told Mother Jones last month that party fundraisers would not return his calls before Collins’ indictment, was added to the Democratic Congressional Campaign Committee’s “Red to Blue” list last week, which guarantees him more institutional party support.

On July 16, McMurray reported just over $46,000 in donations the preceding quarter. Earlier this month, he reported $519,846.94—more than 11 times that amount—helped in part by more than $325,000 raised from ActBlue, the progressive fundraising platform.

This story has been updated to note that a spokesperson for PhRMA disputed the date of the group’s donation to Collins’ campaign.