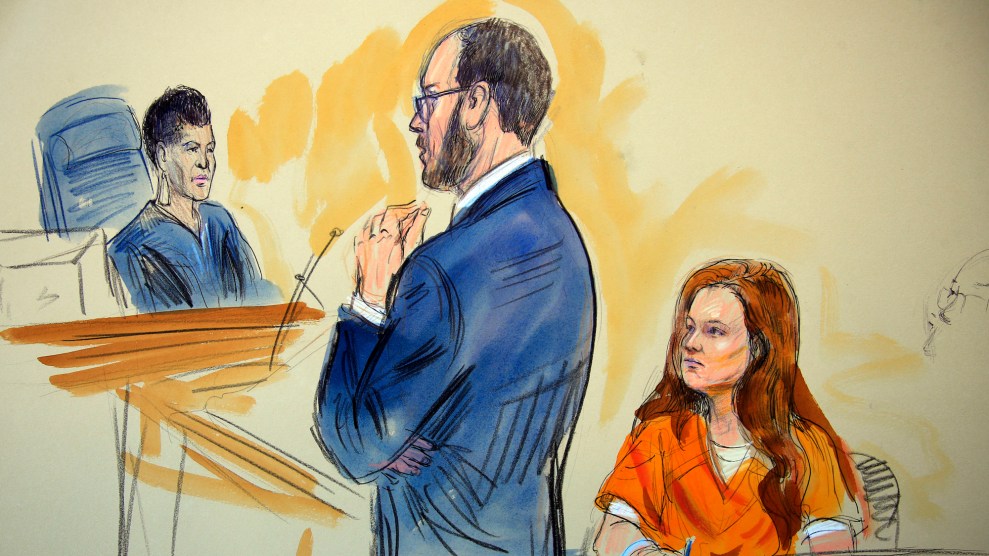 A courtroom sketch depicts Maria Butina, a 29-year-old gun rights activist suspected of being a covert Russian agent, during a hearing at the federal courthouse in Washington, DC, on July 18, 2018. Dana Verkouteren/AP Photo

A judge rebuked federal prosecutors Monday for falsely alleging that Maria Butina, a Russian national accused of acting as an unregistered foreign agent, had offered sex in exchange for a job—but ruled to leave Butina in prison pending trial.

Prosecutors’ allegation, which they grudgingly retracted in a court filing Friday, “damaged [Butina’s] reputation” and “really makes it very difficult to have a fair trial,” US District Judge Tanya Chutkan said Monday at a hearing on Butina’s effort to secure bail.

Still, Chutkan ruled twice for the government at the hearing. She maintained a prior order that Butina be held without bond, saying defense lawyers had failed to show their client did not pose a flight risk. “I cannot envision any scenario where it is not possible…for Ms. Butina to walk out of jail, be put in a car with diplomatic tags, and taken to an airport,” Chutkan said. She also imposed a gag order on defense attorney Robert Driscoll, barring him from speaking to reporters.

Touting herself as the founder of a Russian gun rights group, Butina worked with Alexander Torshin, a top official at the Russian central bank, to gain access to top levels of the National Rifle Association and the Republican Party in 2015 and 2016. Prosecutors charged her on July 16 with acting as an unregistered agent for Russia. In a July 18 motion arguing she should be held without bond, they alleged that Butina’s relationship with a conservative political activist, identified elsewhere as Paul Erickson, was a cover used by Butina as part of an influence operation. Butina was not really interested in Erickson, the government argued, because she once “offered an individual other than [Erickson] sex in exchange for a position within a special interest organization.” Driscoll, Butina’s lawyer, has repeatedly denounced that allegation, noting prosecutors appeared to misread an exchange with an old friend in Russia in which Butina jokingly offered “sex” to repay a personal favor.

In a motion filed Friday, prosecutors said their reading may have been “mistaken,” but argued Butina nevertheless had no US ties that would prevent her from fleeing.

Chutkan said Monday she was “dismayed” by the prosecutors’ claim. “It took approximately five minutes for me to review those emails and tell that they were jokes,” the judge said. “It was apparent on their face.” The prosecutors representing the government on Monday, assistant US attorneys Thomas Saunders and Erik Kenerson, did not respond to Chutkan’s statements. (The case was brought by prosecutors working separately from special counsel Robert Mueller.)

Chutkan wasn’t just frustrated with government prosecutors at the hearing. She chastised Driscoll for submitting videos as evidence, after the court’s deadline, that intended to show that Butina and Erickson have a legitimate relationship, including a clip of the couple lip-syncing the song “Beauty and the Beast” together. “I am not sure what on the earth [the videos’] relevance is to Ms. Butina’s risk of flight,” Chutkan said.

She also knocked Driscoll for using sensationalized language in court filings. Phrases like “reeks of desperation” to describe government arguments seem aimed at an audience other than the court, the judge said. Chutkan further faulted Driscoll for violating a DC court rule barring lawyers from making statements about the merits of cases outside of court. “Counsel for defense is effectively trying the case in the media,” she said.