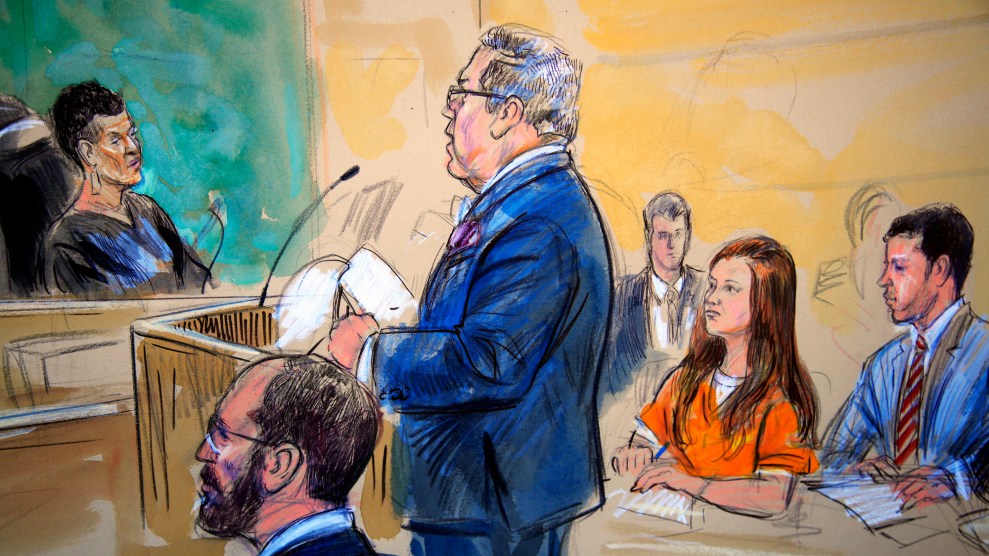 A courtroom sketch depicts Maria Butina, in orange suit, a 29-year-old gun-rights activist suspected of being a covert Russian agent, listening to her lawyer Driscoll, during a hearing at the federal courthouse in Washington, Wednesday, July 18, 2018.Dana Verkouteren/AP Photo

Maria Butina, the alleged Russian spy, offered to cooperate in a fraud investigation being mounted by federal prosecutors in South Dakota that appears to target Paul Erickson, the conservative activist with whom she was romantically linked, according to a letter released by her lawyer and court testimony in her case.

On July 17, Butina was indicted on charges of acting as an unregistered agent of a foreign government. Her involvement in the South Dakota case first came to light last week, during a detention hearing in her case. Arguing that his client was not a flight risk, Butina’s lawyer, Robert Driscoll, noted that she had offered to cooperate in the South Dakota matter. A federal prosecutor pointed out that the case related to allegations of fraud against Butina’s romantic partner, a 56-year-old Sioux Falls, South Dakota, resident. Though he is not named in court filings, that man has been identified in media reports as Erickson.

This week, Driscoll released a copy of a so-called proffer letter from the US attorney in South Dakota, spelling out the terms of Butina’s potential cooperation. The May 29 letter, first reported by the Rapid City Journal, states that Butina “may be willing to make a proffer of possible information and testimony regarding her knowledge of the illegal activities of others.” It’s not clear if Butina signed the agreement. Erickson and Driscoll did not respond to requests for comment.

Erickson helped Butina and Alexander Torshin, a senior Russian banking official from Russian President Vladimir Putin’s party, who worked closely with Butina, gain access to top officials in the NRA and the Trump campaign. Prosecutors have asserted that Butina used Erickson to open doors to conservative players, treating their “relationship as simply a necessary aspect of her activities.”

Federal prosecutors in Washington presumably hope to compel Butina to cooperate in their investigation into Russian influence. During a status conference in the case on Wednesday, Assistant US Attorney Thomas Saunders said prosecutors needed a protective order barring defense lawyers from publicly releasing evidence from the case. “Our concerns are about protecting the integrity of potential ongoing investigations,” Saunders explained. He didn’t elaborate, but court filings in Butina’s case show that prosecutors are looking into Butina and Torshin’s efforts to influence the NRA and the GOP.  Sen. Ron Wyden (D-Ore.), citing reporting by McClatchy, has asked the NRA if it received Russian money intended to support Trump’s 2016 campaign.

Butina, who faces a maximum sentence of 10 years in prison, has been jailed without bond while awaiting trial. During the status conference, US District Court Judge Tanya Chutkan repeatedly sided with prosecutors, who were sparring with Driscoll over an agreement governing the evidence turned over to defense lawyers.

Driscoll argued that he should be allowed to disclose publicly certain evidence in order to combat prosecutors’ allegation that Butina was a Russian agent. “Ms. Butina is the subject of national incorrect media reporting that I am trying to push back on,” he argued.

Driscoll said he was particularly concerned by the government’s claim in a detention memo that Butina offered sex in exchange for a position at a “special interest organization.” Driscoll said he wants prosecutors to turn over any evidence supporting that allegation on an expedited basis: “We have no idea what the government is talking about. We don’t believe it’s true.”

But Chutkan suggested Driscoll should wait for the trial to defend Butina. She chided Driscoll for making cable news appearances and suggested she might consider imposing a gag order in the case. She waved off Driscoll’s request. The defense is not “entitled to individual pieces of evidence to rebut media reports,” she said.