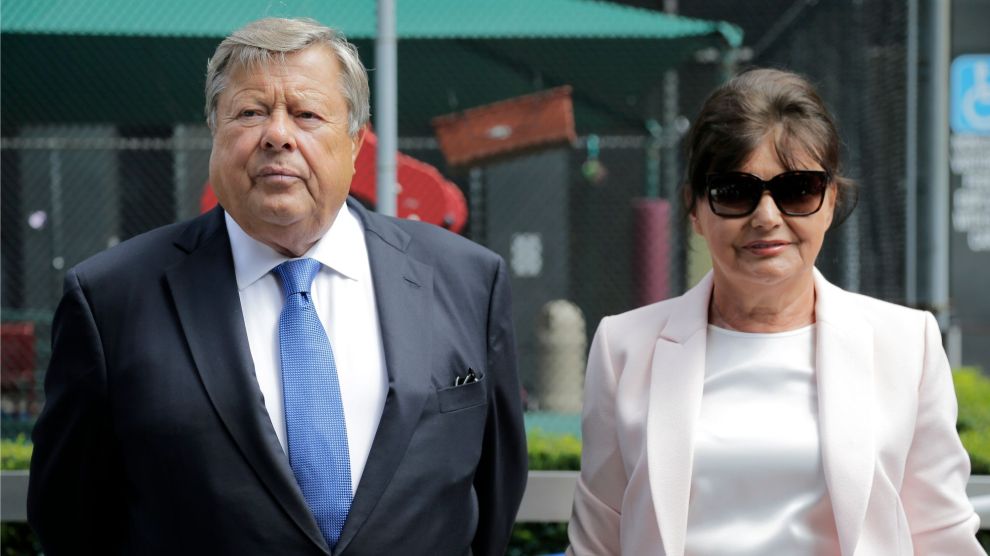 Viktor and Amalija Knavs listen as their attorney makes a statement in New York on Thursday. First lady Melania Trump's parents have been sworn in as U.S. citizens. Seth Wenig/AP Photo

President Donald Trump has long demanded an end to “chain migration”—Republicans’ favorite term for the practice of legal immigrants sponsoring their relatives for green cards. But that hasn’t stopped Melania Trump’s parents, who applied for citizenship in the United States through the same process that their son-in-law hopes to make illegal.

“Once they had the green card, they then applied for citizenship when they were eligible,” the family’s lawyer confirmed to the Times. The lawyer also confirmed that the Knavses had held their green cards for at least five years, as required by law.

Donald Trump has frequently railed against “chain migration” and insisted that any immigration reform bill get rid of this practice. The White House has supported a plan that would stop legal immigrants from sponsoring their parents for green cards—in other words, doing exactly what Melania has done.

CHAIN MIGRATION cannot be allowed to be part of any legislation on Immigration!

In his State of the Union address this year, Trump claimed that family-based migration allows people to bring in “virtually unlimited numbers of distant relatives” and said he supported “limiting sponsorships to spouses and minor children.” As my colleague Kanyakrit Vongkiatkajorn has previously reported, it’s not exactly true that current law allows for “unlimited” migration. The White House has also made misleading claims that the practice threatens national security and hurts the economy.

Despite the president’s hostility toward “chain migration,” both he and Vice President Mike Pence are descended from European immigrants who benefited from family-based migration by joining their relatives in the U.S.

CHAIN MIGRATION must end now! Some people come in, and they bring their whole family with them, who can be truly evil. NOT ACCEPTABLE! pic.twitter.com/PQGeTTdRtX

When asked if Melania Trump’s parents had come to the country via “chain migration,” their lawyer told the Times, “I suppose. It’s a dirty — a dirtier word.” He added: “It stands for a bedrock of our immigration process when it comes to family reunification.”