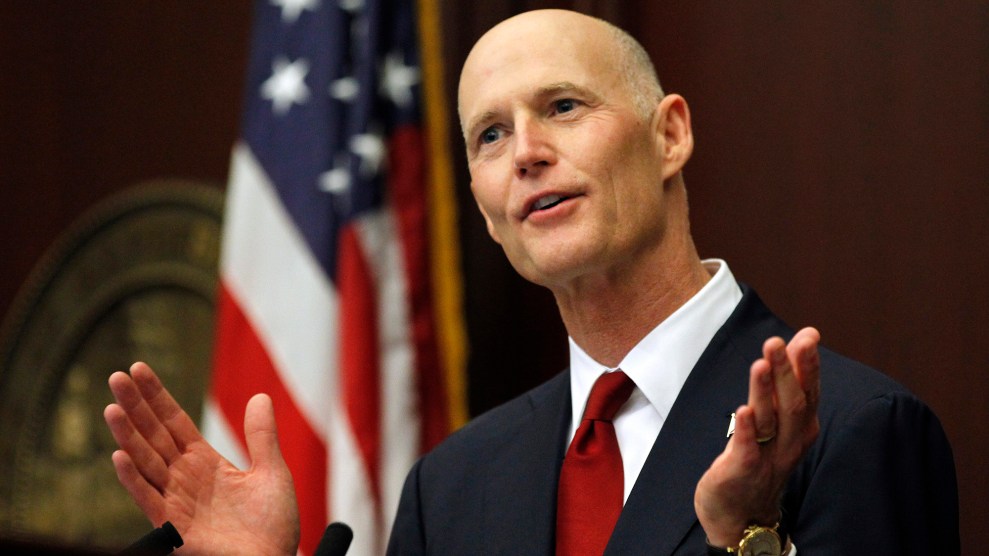 Florida Gov. Rick Scott delivers the State of the State address in January 2012 in Tallahassee.Chris O'Meara/AP

GEO Group, which is based in Boca Raton, Florida, operates prisons and immigrant detention centers across the country. The company and its subsidiaries have received $560 million from federal contracts awarded by Immigration and Customs Enforcement since late 2016, according to OpenSecrets.org. During his tenure as governor, Scott has pushed for the expansion of private prisons in Florida: He campaigned on a pledge to drastically slash the state’s corrections budget, in part by transferring inmates to private lockups. And according to Federal Election Commission filings reported this week by the Tampa Bay Times, GEO Acquisition II, a subsidiary of GEO Group, donated $125,000 to a pro-Scott super-PAC in April after the governor announced his Senate bid.

Brendan Fischer, a lawyer at the Campaign Legal Center, says the subsidiary’s donation violated a federal law that prohibits government contractors from making political contributions. “This ban has been on the books for 75 years” to ensure that public policy isn’t “warped in favor of deep-pocketed contracting interests,” he says. GEO Group did not respond to requests for comment about the subsidiary’s donation.

This isn’t the first time a GEO subsidiary has contributed to a federal campaign. Before the 2016 election, GEO Corrections Holdings gave $225,000 to a pro-Trump super-PAC chaired by Scott, according to financial disclosures. In 2016, the Campaign Legal Center filed a complaint with the FEC arguing that this contribution violated the same campaign finance law, a claim GEO Group has denied as “absolutely baseless and meritless.” “All of our company’s contributions have been fully compliant with all applicable laws,” a company spokesman told Mother Jones last year.

True, GEO Acquisition II—the subsidiary that donated to the pro-Scott super-PAC in April—does not appear to receive federal funding, according to USASpending.gov, a government website. But the subsidiary may still be involved with federal contract work, notes the nonprofit MapLight, which tracks money in politics, because it is a general partner and full owner of CPT Operating Partnership LP, yet another subsidiary that owns facilities in multiple states that process detainees for ICE and the US Marshals Service. “By all appearances, GEO Acquisition II directly or indirectly derived its revenue from federal contracts and should be subject to the contractor contribution ban,” Fischer says.

GEO Group’s political giving has skyrocketed in recent years, according to data from the Center for Responsive Politics. The company’s political action committee, which can legally donate to candidates, offered about $136,000 in donations during the 2016 campaign season, compared with $22,000 in 2012. Since January 2017, when President Donald Trump was inaugurated, GEO’s PAC and employees have made more than $800,000 in political contributions.

Last month, 10 members of Congress declined to take funding from GEO’s PAC in an attempt to distance themselves from the company’s involvement with immigration detention. The prison company’s PAC made two payments to Scott’s Senate campaign in April that were later marked as “void,” OpenSecrets.org reports, and the Scott campaign said it never received them. Scott’s campaign did take in $10,800 from GEO CEO George Zoley and his wife, according to the Tampa Bay Times, and the governor’s Victory Fund has reported $78,600 from the Zoleys.

Last year, the Campaign Legal Center sued the Justice Department for records it hoped would show whether GEO Group’s political giving has influenced the Trump administration’s decision to expand its use of private prisons and immigration detention centers. (Under Obama, the Justice Department had begun to phase out its contracts with private prisons following reports of unsafe conditions, and the Department of Homeland Security had signaled it might do the same.) The Campaign Legal Center received some records from the lawsuit, says Fischer—but “nothing that indicated the administration relied on any studies or research when coming to this decision” about prisons, “which I think supports the inference that the decision was made for political reasons and potentially in response to six figures in support from GEO Group.”

Since the 2016 election, GEO has profited immensely from Trump’s policies, and today it runs six facilities in Florida. It held its annual leadership conference last October in the state, at a golf resort near Miami that is owned by Trump.