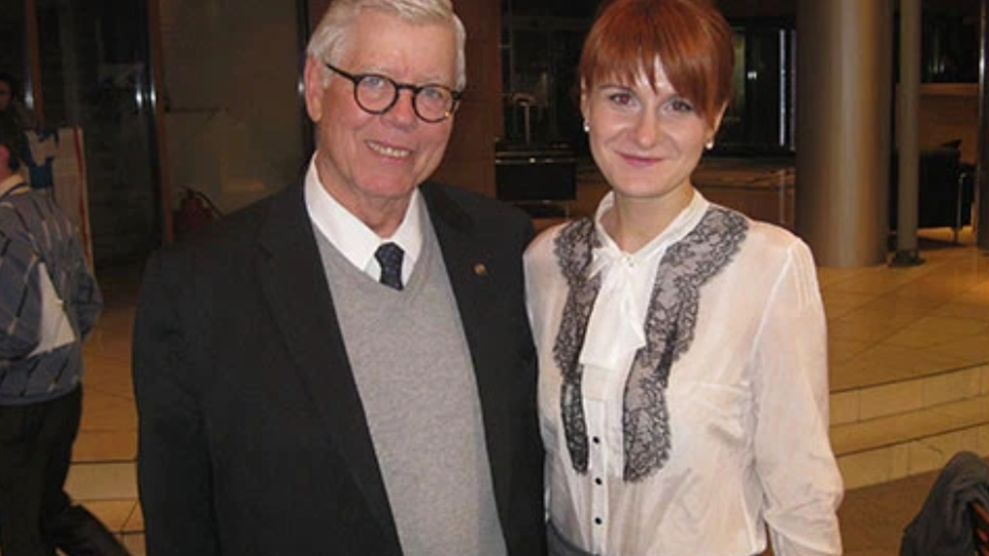 The NRA's David Keene with Butina in Moscow, Nov. 2013Facebook

In an investigation published on Thursday, Mother Jones documented the deep ties between the National Rifle Association and two Russians accused by the FBI of carrying out a malign political influence operation inside the United States: Maria Butina, a self-styled gun activist and former graduate student indicted in federal court this week, and Alexander Torshin, her alleged handler and a high-level Russian government and banking official from President Vladimir Putin’s party. According to federal prosecutors, the goal of the conspiracy was to gain access to top Republicans, including presidential candidate Donald Trump, and “advance the interests of the Russian Federation.”

In pursuit of their mission, Butina and Torshin spent a lot of time cultivating the National Rifle Association—and NRA officials eagerly welcomed the Russians into their midst.  A video recorded in Moscow in 2013, little-noticed until now, shows how a top NRA official enthusiastically cooperated with the Russians to help them build up a new Russian gun-rights group that Butina and Torshin used for their alleged influence operation.

One NRA leader with whom the pair of Russians developed long-term ties was David Keene, an NRA board member who served as president of the organization from 2011 to 2013. In fall 2013, Keene traveled to Moscow at their invitation for a meeting of about 200 gun-rights advocates hosted by The Right to Bear Arms, a fledgling group Butina had set up in 2011. In a video recorded during the event, Butina introduces Keene, who thanks her by her first name as he takes the podium. Keene then begins an eight-minute speech to the group with comments about his warm ongoing relationship with Torshin, who was sanctioned by the Treasury Department this April and has been accused of mob ties and money laundering by the Spanish government. (Torshin denies those allegations.)

“It’s a great honor for me to be here today,” Keene says, “partly because over the course of the last three years, I’ve hosted your senator, Alexander Torshin, at the National Rifle Association annual meetings.”

Keene then talks up the size of the NRA constituency and encourages the small Russian gun group to grow. “More and more people will rally to the cause that you have,” he says, later adding: “There are no people that are more alike than Americans and Russians. We’re hunters, we’re shooters—we value the same kinds of things. And we need to work together to the extent that we can on these and other important issues.”

Our investigation this past spring documented Torshin’s presence at five consecutive NRA annual conventions from 2012 through 2016. If Keene’s comments in Moscow were accurate about hosting the Russian official “over the last three years,” that means Torshin also attended a sixth NRA annual convention, in Pittsburgh in April 2011.

Around the trip to Moscow, Keene enlisted future Trump national security adviser John Bolton—then a member of the NRA’s “international affairs subcommittee”—to record a video address talking up gun rights, which the Right to Bear Arms used to lobby the Russian legislature.

Keene and the NRA did not respond to inquiries from Mother Jones, including about whether Keene was paid by the Russian gun group for the speech in Moscow.

Torshin’s social media trail sheds additional light on the timeline of his extensive involvement with the NRA. In October 2011, he tweeted, “I’m a member of the American NRA. That’s the National Rifle Association.” And in December he tweeted, “I often go to the USA (as an NRA member) and many there don’t like Obama. So what?”

During Torshin’s trip to St. Louis the following April for the organization’s 2012 convention, he posed for a photo wearing an “all access” badge and embracing Keene: “With the president of the NRA.”

It is unclear who else may have accompanied Torshin in St. Louis, but recalling the trip a few months later, Torshin hailed Keene’s hospitality in the plural first person. “We were hosted by the president of the NRA. It was very dignified…we were guests of the highest rank.”

That November, he posted a photo of himself taken at another destination: It showed Torshin in Fairfax, Virginia, standing in front of NRA headquarters. Many more visits with NRA leaders were yet to come.