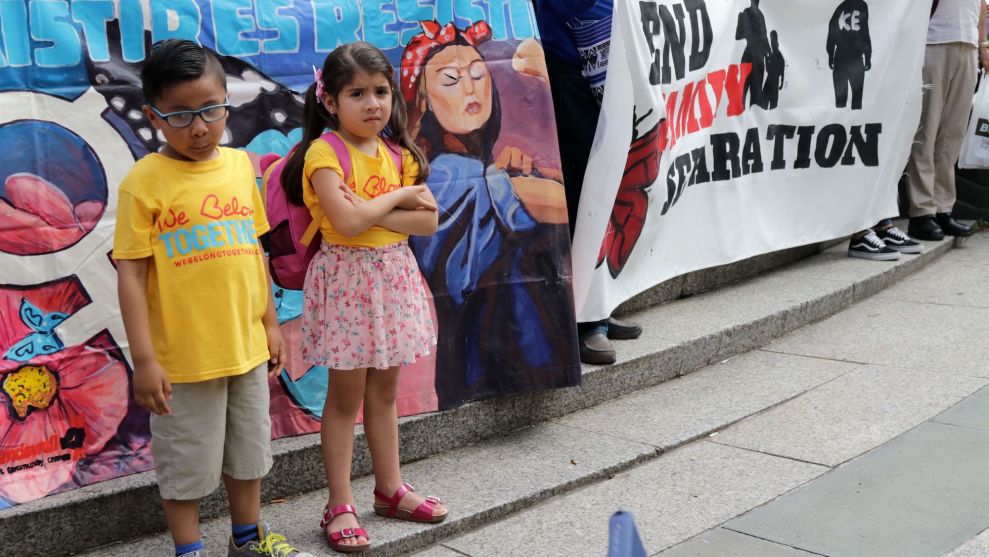 On Friday morning, for the first time in nearly a month, there were no parents at the McAllen, Texas, courthouse who had been separated from their children. Standing outside the court, Efrén Olivares, the director of the Texas Civil Rights Project’s racial and economic justice program, told reporters that his organization had interviewed more than 380 separated parents over the past month. This was the first time since at least May 24 that no parents were being prosecuted in McAllen after being split from their children.

But the suffering caused by President Donald Trump’s family separation policy is far from over. Olivares said there are more than 1,000 children who are still separated from their parents. Some parents don’t even know where their children are. More than 2,300 children were separated from 2,206 parents between May 5 and June 9, according to government officials.

The administration has not articulated any clear policy or plan for reuniting families. Child and immigrant advocates, lawyers, and federal public defenders say the process for connecting separated family members remains convoluted and opaque. It can take weeks, if not months, for parents to locate their children and connect with them on the phone.

Children have been taken to shelters all over the country while their parents remain far away in detention. And some parents may have been deported without their children; the New York Times reported on Sunday that a mother was deported to Guatemala without her son.

On Wednesday, Trump signed an executive order that calls for ending family separation and instead detaining families together indefinitely. (A court ruling currently bars the government from keeping children detained for more than about 20 days.) The next day, he said he was directing government agencies to reunite the families that his zero-tolerance policy separated. But there is not much evidence that is happening yet.

The Department of Health and Human Services said in a statement that it is “awaiting further guidance on the implementation of the executive order.” US Immigration and Customs Enforcement told reporters earlier this week that its usual policy is to wait until families are close to being deported before reuniting them. ICE did not respond to requests for comment about whether its reunification policy has changed since the executive order was issued.

Some families have been reunited, but most have not. The Texas Civil Rights Project has not been able to confirm that any of the more than 380 parents it worked with have joined their children.

The Trump administration is currently fighting a lawsuit brought by the American Civil Liberties Union that would require the Department of Homeland Security to reunite families, either by releasing them or by holding them in family detention facilities. A Justice Department lawyer told a federal judge in the case in early May that there is not a process for reuniting families after they’re separated. Lee Gelernt, the deputy director of the ACLU Immigrants’ Rights Project, tells Mother Jones that the government didn’t provide a justification for keeping families apart. “I don’t think they have a reason not to do it, other than—the truth is that they’re trying to use separation as a deterrent,” Gelernt says.

Erik Hanshew, a federal public defender in El Paso, has repeatedly had to tell his clients that he doesn’t know where their kids are. “I can’t promise that they’ll be able to speak to their children,” he wrote in an essay for the Washington Post, “or know their whereabouts or who is taking care of them, or whether they’ll be sent back home without their kids.”

Hanshew tells Mother Jones he’s seen no “tangible change” for his clients since Trump’s executive order. He has represented about half a dozen parents who were separated from their children. Some of them still do not where their children are. Maureen Franco, the chief public defender in El Paso, says her lawyers and investigators are often able to determine the location of a client’s child within a week. But she also mentioned a case in which it took four months to locate a separated child. Her staff has had to do double-duty representing people in court while also helping them find their kids.

Part of the challenge, Hanshew says, is that the Office of Refugee Resettlement, which is responsible for housing and caring for migrant children, prefers to talk to parents directly, but doing that while “they’re locked up in a cage in custody is nearly impossible.” It would be much easier to coordinate with ORR if his clients were released while they await their trial. But federal attorneys have been fighting those efforts.

After their criminal prosecution hearings, parents have usually been transferred to ICE detention facilities where their struggles to find their kids have continued. There is an ICE flyer that provides parents with information on how to locate their children, but it’s unclear how many parents actually receive it. Elissa Steglich, an immigration law professor at the University of Texas at Austin, told Mother Jones last week that the process for finding children is “nonexistent.” She added, “The isolation and lack of information is just devastating.” Marsha Griffin, the co-chair of the American Academy of Pediatrics group on immigrant health, says the wrong name has been written down for some children, making it harder to locate them.

Manoj Govindaiah, the director of family detention services for the immigrant advocacy group RAICES, says the group is still “feverishly working” to try to located separated kids and parents as they face a “convoluted and complicated” process. “ICE has been almost going on a PR blitz to say, ‘We are working on this…The fake media is making this into a much bigger problem than it is,'” Govindaiah adds. “But it is a huge problem.”

At the press conference on Friday morning, a reporter asked Olivares how the government is keeping track of children, and whether they have name tags or hospital bracelets. Like other advocates, Olivares said he was not sure. He’d heard secondhand that some families had been photographed together before being separated. “That seems like a very rudimentary and fallible system to me,” he added. “But I pray to God that no children [are] going to be misplaced.”