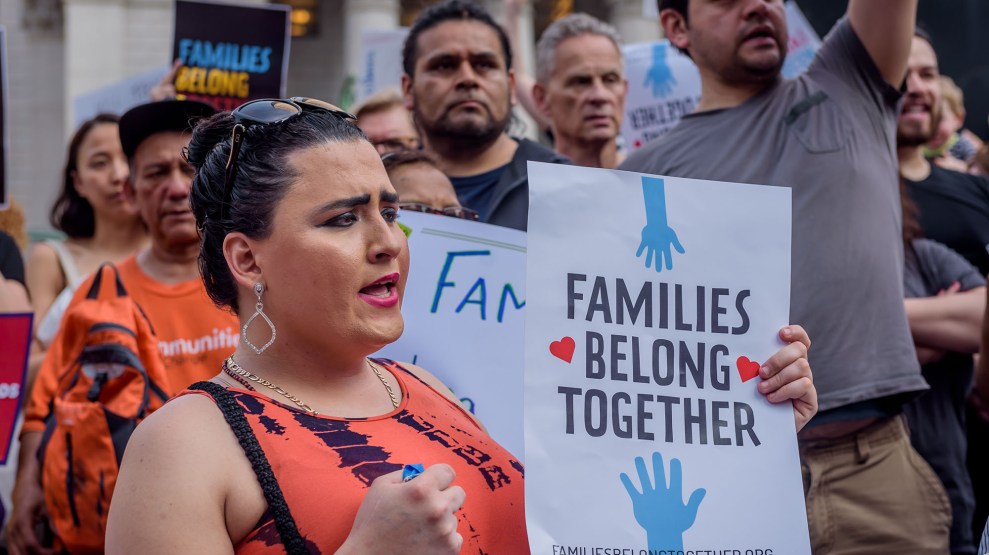 Protesters in New York rally to end family separations at the border on June 1.Erik Mcgregor/ZUMA

In backing down from his family separation policy on Thursday, President Donald Trump asked the courts for help. He wants to modify a legal precedent that prohibits the government from detaining immigrant children for more than a few weeks, in order to keep them together with their parents. That puts him in the strange position of making the same legal argument that the Obama administration did. The trouble for him is that the Obama administration lost—and he probably will too.

The Justice Department, which made the court request on Thursday, is limited by the Flores settlement, a 1997 class-action settlement between unaccompanied immigrant minors and the federal government that requires the government to release minors promptly from immigration detention. The federal court enforcing Flores has required the release of minors within about 20 days. On Thursday, lawyers for the government asked California federal judge Dolly Gee to modify the settlement to allow the detention of minors for more than 20 days in order to keep them with their parents. But the request is a long shot, and legal experts expect the court to rebuff their request.

In a court filing Thursday, the administration claimed that an increase in family border crossings has changed the situation on the ground and created a new crisis that necessitates a modification to Flores. But the argument the government is making is not new. In 2014, the Obama administration made a similar request, likewise hoping to extend the detention of minors with their parents, and was rebuffed by the courts—first by Gee and then by a federal appeals court a year later.

“What we are seeing here is a politicization of immigration,” says Rose Cuison Villazor, a professor of immigration law at the University of California-Davis School of Law. “The administration claims that there has been yet another surge, warranting a change in the Flores settlement.” But Cuison Villazor says the numbers don’t bear that out.

According to the government’s filing, family border crossings are at a peak, and it projects an increase of about 10,000 for 2018 over last year. (That estimate is likely high because border crossings hit their zenith in the spring, and it doesn’t reflect a likely tapering-off later in the year.) But the Obama administration was seeing an even bigger spike from the preceding years in 2014, when it also sought an exemption from Flores, and Gee and the appeals court saw little merit in the argument then.

The administration’s current quandary is the result of Attorney General Jeff Sessions’ new “zero tolerance” policy, under which the administration seeks to criminally prosecute everyone crossing the border illegally. The decision forced the separation of children from their parents because children could not be held in federal jails with their parents. After a public backlash forced Trump to sign an executive order Wednesday aiming to keep families together, the logistics of zero tolerance became tricky. The administration’s new goal is to keep families together in detention while they await criminal proceedings. That plan, however, conflicts with Flores, unless the administration can somehow find a way to adjudicate all these cases within 20 days.

The administration is effectively asking the court to create a giant loophole in the Flores settlement, one that would allow children to be detained for longer stretches of time if they arrive with their parents than if they come alone. The government’s petition to the court did not specify how long minors could be detained with their parents.

The government claims it cannot release families because they will skip their court dates and live unauthorized in the United States. But there are other measures, such as ankle bracelets, that would allow the government to keep families together while parents await their day in court. “The numbers show that those have been quite effective in ensuring that people show up” to their hearings, says Cuison Villazor. Instead, the administration is hoping that the court will change the decades-long settlement to allow the government to detain accompanied minors indefinitely.

If the courts rebuff the government’s request, it will force the administration to make a decision: Go back to separating families despite political blowback, or keep them together by releasing them within 20 days.