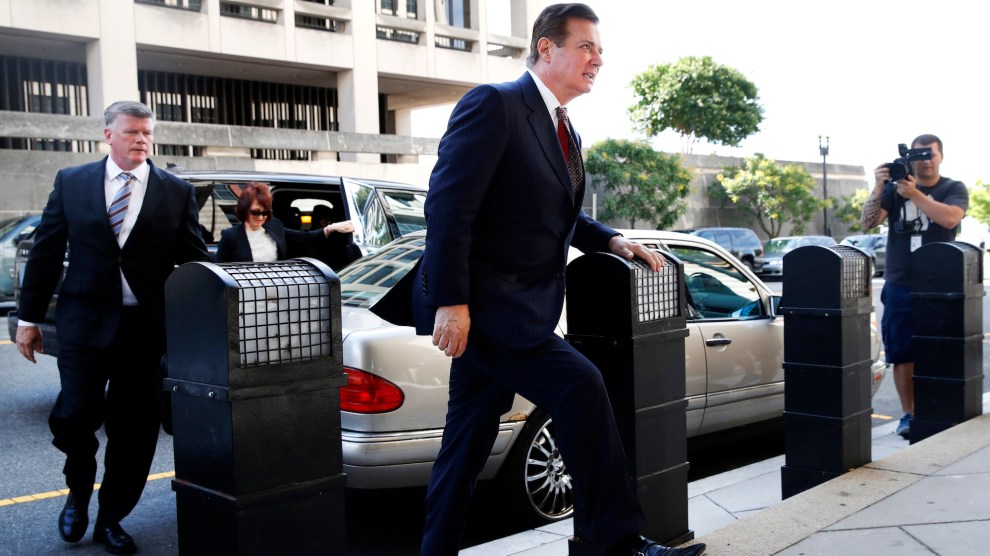 At a hearing in federal court on Friday in Washington, special counsel Robert Mueller’s team successfully argued that Paul Manafort could not be trusted. The judge agreed that Manafort, who allegedly tampered with witnesses, presented a danger to the rule of law and revoked bail for the indicted former Trump campaign chairman, and Manafort was led away to jail. To show he was a practitioner of deceit, Greg Andres, an attorney on Mueller’s probe, said Manafort has engaged in the art of “foldering.” As Andres noted, foldering involves giving multiple people access to a single email account so they each can read emails created as drafts. (A message is never transmitted—which means it cannot be intercepted—and usually a message is destroyed after being read.) Foldering is a way to “hide the fact that you’re sharing information,” Andres explained.

Andres cited Manafort’s use of this tactic in detailing the various means Manafort has employed for secret communications, including encrypted apps. The point was that Manafort, if allowed to remain free on bond, would resort to underhanded actions to mess with the ongoing prosecution. “There is a history of deception on behalf of Mr. Manafort in this case,” Andres told the court.

Manafort, who already faced a long list of charges for alleged tax evasion, bank fraud, illegal lobbying, and money laundering, was hit last week with a superseding indictment, an updated version of previous indictments filed. It charges the onetime Washington power broker with obstructing justice by allegedly conspiring with a former Russian military intelligence officer to influence the testimony of witnesses in the case against him. Prosecutors say Manafort and the Russian, Konstantin Kilimnik, used WhatsApp and other encrypted applications to urge witnesses to support Manafort’s claim that a lobbying effort by former European politicians that Manafort organized on behalf of Ukrainian president Viktor Yanukoych did not operate in the United States. (According to Mueller, it did, and Manafort violated the law by not registering with the Justice Department as a foreign agent.)

At the bail hearing for Manafort, prosecutors did not say whether Manafort used foldering as part of his alleged attempt at witness-rigging. The reference to foldering also raised the possibility that prosecutors had discovered that Manafort used draft email messages to for other purposes—possibly to communicate with Russians.

The public record already contains reports of possible instances of Manafort interacting with Russian contacts. According to CNN, US intelligence agencies in 2016 intercepted communications among suspected Russian operatives discussing efforts to work with Manafort “to coordinate information that could damage Hillary Clinton’s election prospect.” A set of memos written by former British intelligence officer Christopher Steele cites sources who said Manafort managed a Trump campaign effort to cooperate with Russian leadership during the campaign. And during the 2016 campaign, Manafort maintained contact with Kilimnik, and through Kilimnik offered to brief Russian oligarch Oleg Deripaska, a confidante of Russian President Vladimir Putin, on the Trump campaign.

Until more information is revealed, the mystery of Manafort’s foldering will remain. But the prosecutors did note that Manafort’s use of draft-email messaging buttressed their overall contention that he is a conniver who cannot stop committing crimes, even when out on bail and under strict government scrutiny.