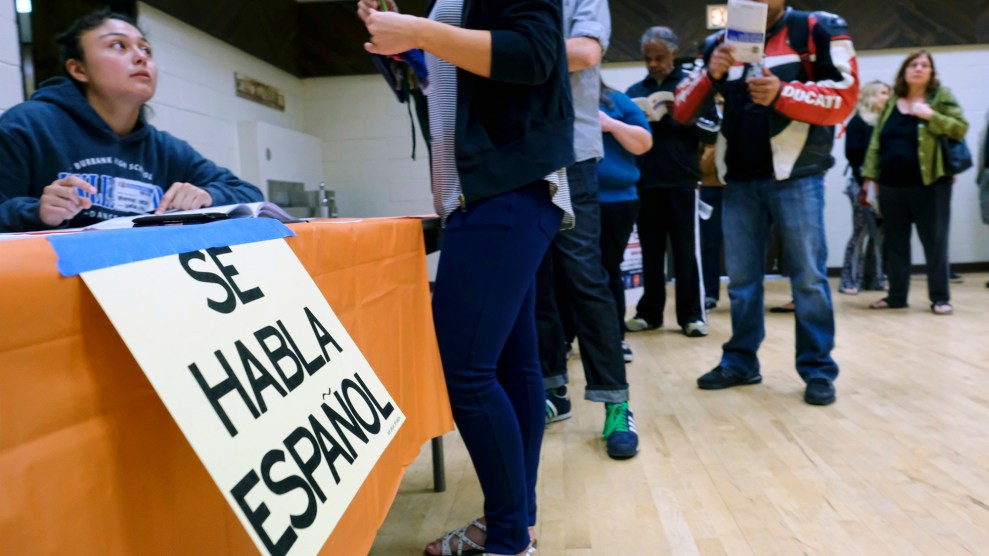 A polling station in Los Angeles on November 8, 2016. Richard Vogel/AP

In March, the Trump administration added a question about US citizenship to the 2020 census for the first time since 1950, leading critics to charge that the question was a deliberate effort to reduce the response rate among immigrants and the political power of the cities and states where they live. But at a congressional hearing on Friday, another potential motive for the controversial census question was on full display: using the data to allocate political representation on the basis of the number of citizens in a district or state rather than the total population.

Such a move would mean a fundamental shift in the way representation is determined, dating back to the country’s founding, when the framers of the Constitution decided the balance of representation would take into account populations that didn’t have the full rights of citizenship, such as slaves and women. It would also significantly diminish representation for areas with large numbers of immigrants and shift political power to whiter and more Republican areas.

It may seem far-fetched, but the concept has the backing of some prominent Republicans. Rep. Steve King (R-Iowa), the leading anti-immigration hardliner in Congress and chair of the House Judiciary Subcommittee on the Constitution, presided over a hearing Friday in which he endorsed the idea of excluding undocumented immigrants from the census. “The current policy under which illegal aliens are counted in the census,” King said, “allows areas with many illegal aliens to elect more federal and state representatives than areas with higher populations of citizens.” King previously said that “we need to be counting citizens instead of people for the purposes of redistricting,” suggesting that noncitizens living legally in the United States could also be excluded from representation.

King’s views were backed by Alabama Attorney General Steve Marshall, who has sued the Census Bureau to prevent it from counting undocumented immigrants in the decennial reapportionment of the House of Representatives and Electoral College. “Large illegal alien populations indisputably redistribute power from Americans living in states comprised mostly of US citizens and permanent legal residents and give it to others who live in states with large illegal alien populations, compromising the right to equal representation,” he said.

Marshall’s claim was echoed by former George W. Bush Justice Department aide J. Christian Adams, who has been sued for voter suppression by civil rights groups for falsely claiming that an “alien invasion” had allowed thousands of undocumented immigrants to vote. “A census that collects robust citizenship data also will give policymakers the tools to curb the real, everyday foreign influences in our political system—namely ending political subsidies in legislative bodies for areas with large alien populations,” Adams said.

Ceasing to count noncitizens, documented or undocumented, toward redistricting and reapportionment would mark a dramatic departure from longstanding democratic norms and recent Supreme Court precedent. In the 2016 case Evenwel v. Abbott, the Supreme Court unanimously ruled that states should draw legislative maps based on total population, not the number of citizens in a district. “It remains beyond doubt that the principle of representational equality figured prominently in the decision to count people, whether or not they qualify as voters,” wrote Justice Ruth Bader Ginsburg in a unanimous 8-0 opinion.

When the Trump administration added the citizenship question, the Commerce Department claimed it was needed for “more effective enforcement” of the Voting Rights Act. Civil rights lawyers such as Vanita Gupta, the former head of the Justice Department’s Civil Rights Division under Barack Obama, said that was “plainly a ruse to collect that data and ultimately to sabotage the census.” The Constitution requires the census to count “the whole number of persons in each State.” The outcome of the census determines not only how voting districts are drawn, but how $675 billion in federal funding is allocated to states and localities.

Using a citizenship question to prevent noncitizens from counting toward representation would turn one of the most important constitutional acts—the gathering of census data every 10 years—into a political weapon. The census already routinely undercounts immigrant populations, depriving their cities and states of political and economic resources. Excluding them from representation altogether would drastically curb the influence of minority populations at a time of rapid demographic change. “What we’re talking about here is simply power,” Rep. Steve Cohen (D-Tenn.) said at Friday’s hearing, “and the power would go to states that don’t have as many immigrants.”