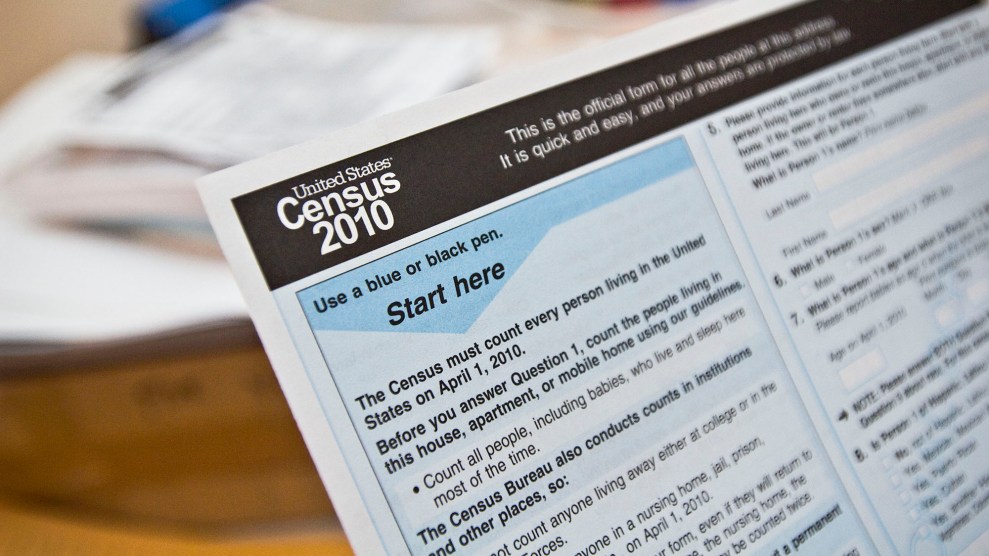 A copy of the 2010 census form. Idaho Press-Tribune, Charlie Litchfield/AP

The 2020 census will include a question about US citizenship for the first time since 1950, the Commerce Department announced Monday night. Civil rights groups say the question will massively depress responses from immigrants fearful of deportation and could sabotage the entire census.

The move sets up a huge legal and political battle over one of the most important tasks mandated by the Constitution. California Attorney General Xavier Becerra and former US Attorney General Eric Holder have already announced their intention to sue the Trump administration over the new question. Democratic members of Congress have also said they will introduce legislation to block the new question.

#BREAKING: Filing suit against @realdonaldtrump's Administration over decision to add #citizenship question on #2020Census. Including the question is not just a bad idea — it is illegal: https://t.co/vW8sa7khq9

Constitution does not require citizenship question. This is purely political. Trump Administration is trying to rig the 2020 Census (to protect gerrymandering) by intimidating people. Don’t be fooled-some states will unfairly lose funds and representation. We will sue. https://t.co/2R3mZ0FQSp

The Justice Department requested the citizenship question in December, and Commerce Secretary Wilbur Ross wrote in a letter on Monday that it was needed for “more effective enforcement” of the Voting Rights Act. (The Commerce Department oversees the Census Bureau.)

But Vanita Gupta, who led the Justice Department’s Civil Rights Division under President Barack Obama and is now president of the Leadership Conference on Civil Rights, told me, “Voting rights enforcement has never depended on having that question on the [census] form since the enactment of the Voting Rights Act. That’s plainly a ruse to collect that data and ultimately to sabotage the census.” The citizenship question, she noted, is already asked on the longer American Community Survey, which reaches roughly 13 percent of American households and is used to enforce civil rights laws.

The census, unlike the American Community Survey, determines how many congressional seats and electoral votes states receive, how voting districts are drawn, and how $675 billion in federal funding is allocated to states and localities. The 2010 census failed to count 1.5 million people of color, including 1.5 percent of Hispanics, 2.1 percent of African Americans, and 4.9 percent of Native Americans. If immigrant communities don’t respond to the census for fear that it will be used to initiate deportation proceedings against them, the undercount of Latinos could grow much higher. That would deny federal resources and representation to areas with large Latino populations and shift economic and political power to whiter and more Republican areas. Internal focus groups conducted by the Census Bureau last year found that when it came to responding to the census, “fears, particularly among immigrant respondents, have increased markedly” under the Trump administration.

Five former directors of the Census Bureau, who served under presidents of both parties, told me they opposed the citizenship question and wrote a letter to Ross expressing their opposition, saying it would lead to an unfair and inaccurate total count. “It would be a horrendous problem for the Census Bureau and create all kind of controversies,” said Steve Murdock, who ran the census under George W. Bush. Ken Prewitt, who ran the census under Bill Clinton, said, “It is simply inconceivable to me there would not be a very high level of anxiety around that question.” Vincent Barabba, who ran the census under Richard Nixon, Gerald Ford, and Jimmy Carter, called the addition of the question “beyond comprehension at this point. It would be really bad.”

Five former directors of the Census Bureau, who served under presidents of both parties, told me they opposed the citizenship question.

Unlike all the other questions on the census form, the citizenship question has not been tested in field surveys because the request was made so late, so even the bureau doesn’t know how bad the impact could be. “My biggest concern is that it hasn’t been tested in a census environment,” said John Thompson, who ran the Census Bureau under Trump before resigning last June. “There are a lot of concerns that a lot of population groups won’t respond because they won’t trust the government with their data.”

In January and February, I interviewed Latino immigrants in five towns and cities in California’s Central Valley, around the Fresno area, for a forthcoming Mother Jones feature about the census. When I asked them whether they’d respond to the census if it included a question about citizenship, virtually all of them said no.

“I wouldn’t answer the form if that question is on,” said Ana, a farmworker and mother of three from Parlier, California, which is home to many migrant farmworkers. “The word ‘citizen’ scares us. There’s a lot of tension in the country right now.” At a community meeting in nearby Huron, California, another Latino immigrant named Erica told me, “Once they see that question, forget it. People will throw the form away.”

Civil rights groups say the citizenship question will make it extremely difficult for them to convince Latino and other immigrant groups to respond to the 2020 census. “That will sabotage the entire census count, because it will make it virtually impossible to convince people to fill out the form and skyrocket the cost of the census,” Arturo Vargas, executive director of NALEO and a member of a census advisory committee, told me in February. When people fail to respond to census forms, the Census Bureau must send employees out to knock on their doors—an expensive and labor-intensive process.

Some Republicans have proposed using the citizenship question to draw new legislative maps based on the number of citizens in a district rather than the total population. That would significantly diminish political representation for areas with large numbers of noncitizens. “A person whose very presence in the United States is illegal—and who may return home or be deported at any time—cannot be considered a resident of the district in any meaningful sense,” Kansas Secretary of State Kris Kobach, the former head of President Donald Trump’s election integrity commission, wrote in Breitbart News in January.

“It would be a horrendous problem for the Census Bureau and create all kind of controversies,” said Steve Murdock, who ran the census under George W. Bush.

The census has always counted “the whole number of persons in each State,” as mandated by the Constitution, rather than just the number of citizens. In the 2016 case Evenwel v. Abbott, the Supreme Court unanimously ruled that states should draw legislative maps based on total population, not the number of citizens in a district. “It remains beyond doubt that the principle of representational equality figured prominently in the decision to count people, whether or not they qualify as voters,” wrote Justice Ruth Bader Ginsburg.

Even before Ross announced his decision, Trump’s 2020 reelection campaign had begun fundraising off the citizenship question. “In another era, this would be COMMON SENSE,” the campaign said in an email on March 19, “but 19 attorneys general said they will fight the President if he dares to ask people if they are citizens.”

ProPublica reported in early March that the citizenship question was requested by acting attorney general John Gore, “at the request of [Justice Department] leadership,” according to one email ProPublica obtained.

Gore has a long history of opposition to voting rights, as Mother Jones has reported:

Gore has a long history of supporting policies that have restricted voting rights and run afoul of the Voting Rights Act. At the Justice Department, he drafted briefs supporting Texas’s voter ID law and voter purging in Ohio, both of which courts found violated federal voting rights laws. In private practice at the law firm Jones Day, he defended Republican redistricting efforts in several states, including in Virginia, whose electoral map courts later invalidated for racial gerrymandering. He also defended a voter purge in Florida that would have disproportionately removed voters of color from the rolls had it not been blocked by the courts.

The Trump administration, despite its stated interest in protecting the Voting Rights Act, hasn’t filed a single suit to enforce the law, as most administrations typically do with regularity.

The 2020 census is already facing an array of problems, from a lack of full-time leadership to budget cuts to a reliance on untested new internet technology. The citizenship question will make the prospect of a failed census all the more real.