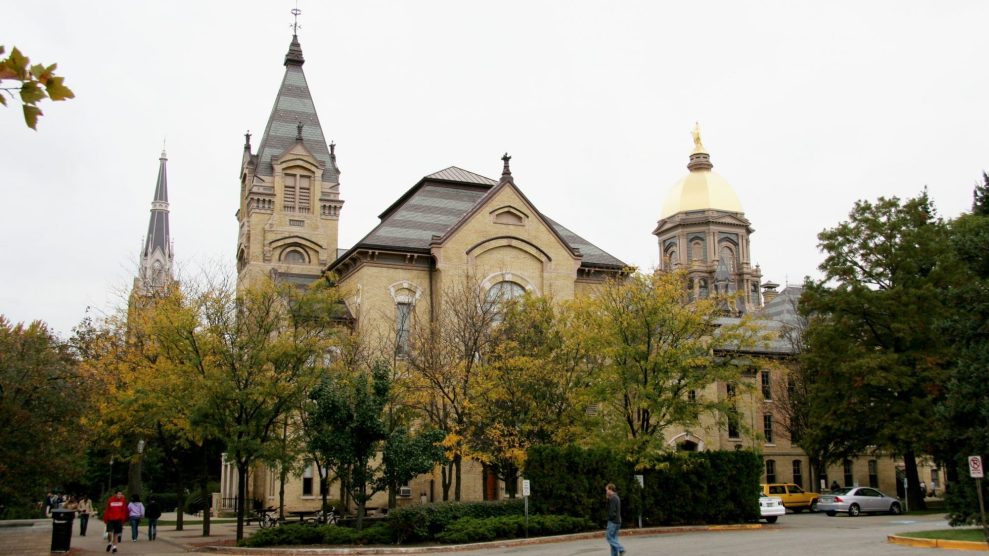 University of Notre Dame students filed a federal lawsuit against their school and the Trump administration on Tuesday in response to the university’s decision earlier this year to end insurance coverage of some contraceptives for its students and employees. The suit is the latest in a multi-year back-and-forth between Notre Dame, the federal government, and reproductive-rights advocates.

The lawsuit asks the District Court for the Northern District of Indiana to prevent Notre Dame from dropping coverage of some forms of birth control, including the morning-after pill and certain intrauterine devices, and requiring out-of-pocket payment for others. It argues that the university’s policy violates the Affordable Care Act’s requirement that health plans cover the entire cost of a range of preventive health services, including all Food and Drug Administration-approved forms of contraception, and that the school’s policy violates the plaintiffs’ Constitutional rights.

Several women’s rights and freedom-from-religion advocacy groups brought the lawsuit on behalf of Irish 4 Reproductive Health, a student organization, and others insured under Notre Dame’s health plans. In addition to Notre Dame, the suit names as defendants the departments of Labor, the Treasury, and Health and Human Services, as well as the heads of those departments.

Notre Dame, a Catholic institution, objects on religious grounds to providing certain forms of contraceptives. In 2012, the university sued the Obama administration over the ACA’s birth control mandate. That suit was deemed premature and thrown out, then refiled the next year, initiating years of legal reckoning between Notre Dame and the Obama government. The university seems to see more eye-to-eye with the new administration, however.

Notre Dame has pointed to the Trump administration’s October 2017 announcement of rules making it easier for organizations to deny birth control coverage on religious or moral grounds. Just weeks after the announcement, the school said it would be revoking insurance coverage of contraceptives for all students and employees. It reversed that decision in November, announcing that it would provide coverage through a third party. Then in a February letter, Notre Dame President Rev. John I. Jenkins announced the school would cover only some contraceptives. The policy is expected to take effect later this year.

Meanwhile, the legal standing of Trump’s rule rolling back the contraceptive coverage mandate has come under scrutiny: Two federal courts have issued injunctions blocking the rule from taking effect. Notre Dame has cited a 2017 private settlement agreement it reached with the Trump administration to justify moving forward with its new policy despite the fact that the Trump rule is on hold.

In his February 7, 2018 letter to faculty and staff, Rev. Jenkins characterized the Obamacare birth control mandate as a departure “from a long tradition in federal law by distinguishing between religious institutions that were exempt, such as parishes, and those that were not, such as universities and hospitals,” adding that it “created a precedent for further constraints on the latter’s religious freedom.”

The three groups that filed on behalf of the students say the settlement agreement is invalid. In a press release, the National Women’s Law Center, Americans United for Separation of Church and State, and the Center for Reproductive Rights wrote:

Notre Dame claims the illegal settlement agreement with the Administration gives it the right to drop coverage, notwithstanding the fact that the contract violates the rights of third parties who were not included in the negotiation process, or even informed of the agreement, at the time.

Emily Nestler, a senior staff attorney at the Center for Reproductive Rights, says the lawsuit has implications beyond Notre Dame.

“This case has several different things that are relevant” more broadly, Nestler told Mother Jones. “One is, of course, the denial of reproductive freedom to choose contraception for plaintiffs at Notre Dame and across the country.” Nestler also said that the school’s policy violates the constitution.

“We have Establishment Clause claims because it forces the religious views of some on others, contrary to their belief systems,” she said. “And we also have due-process claims that it violates people’s rights to liberty and to control their own bodies and make decisions that are best for their own bodies and their own families.”

In a terse statement about the lawsuit, Notre Dame spokesman Paul Browne wrote simply, “The assertions on the face of it are maliciously and preposterously false.”

A 2011 Guttmacher Institute report found that 98 percent of sexually active American Catholic women reported having used a method of birth control other than natural family planning.