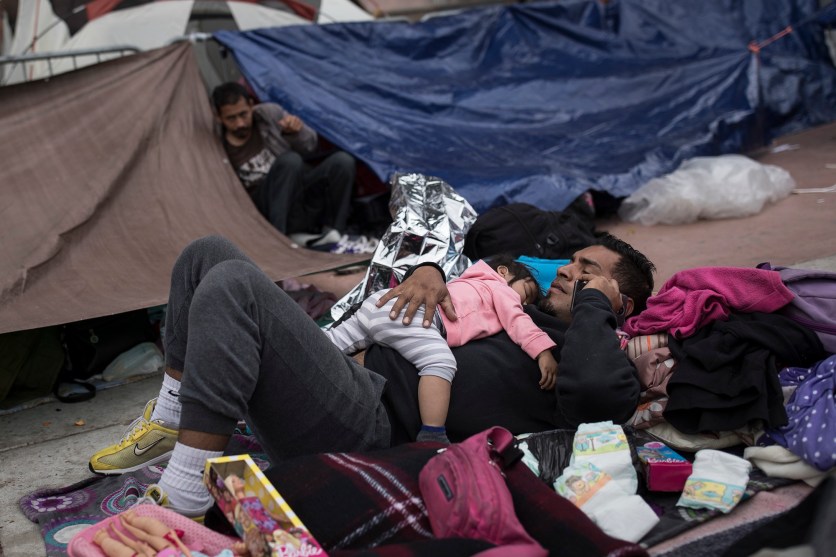 A migrant father and child, who traveled with the annual caravan of Central American migrants, wait to request asylum at the US-Mexico border in Tijuana, Mexico in April.Hans-Maximo Musielik/AP

Forty Democratic senators are calling on President Donald Trump to end his administration’s “inhumane decision” to separate children from their parents at the border. The senators write that the using family separation to deter migrants “is not only frighteningly callous, but demonstrates willful ignorance of the violence and unlivable circumstances many families are risking their lives to escape.”

The letter, organized by Sens. Patty Murray (D-Wash.) and Ron Wyden (D-Ore.) and sent to Trump on Thursday, comes after Attorney General Jeff Sessions announced last month that the Justice Department will try to prosecute everyone who crosses the US-Mexico border without authorization, regardless of whether those people are seeking asylum from persecution.

The new policy splits up families by placing parents in jails, forcing children to be transferred to the care of the Department of Health and Human Services. After parents are released from jail, immigrant advocates complain that they are transferred to US Immigration and Customs Enforcement detention centers and still prevented from reuniting with their children.

The Democratic senators say the Trump administration is exacerbating the trauma that child migrants experience in their home countries and while traveling to the United States. Colleen Kraft, the president of the American Academy of Pediatrics, said in a statement last month that she was “appalled” by the move to separate families, adding that “highly stressful experiences, like family separation, can cause irreparable harm” to children.

Instead of holding people in detention, the senators argue that it would be more cost-effective and humane to use community-based programs that provide social services and legal resources to help increase appearance rates in immigration court. “We ask that your Administration rescind this unethical, ineffective, and inhumane policy and instead prioritize approaches that align with our humanitarian and American values,” they write.

Read the full letter below.