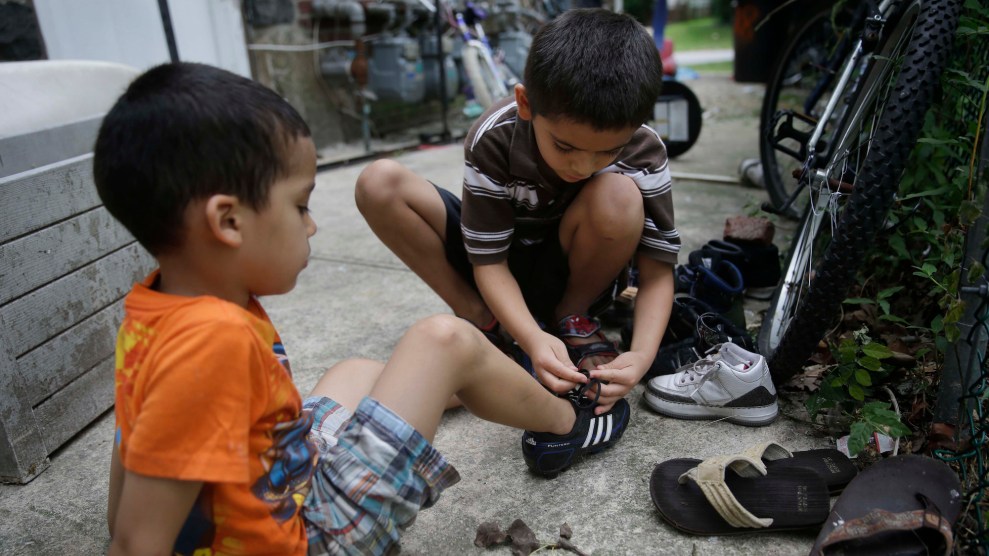 US law prohibits the government from holding unaccompanied children at the border for more than 72 hours before transferring them to the care of child welfare workers, unless there are “exceptional circumstances.” But following the Trump administration’s new hardline immigration policy that is separating children from their parents at the border, hundreds of children currently at US border stations have been there longer than that.

NBC News reports that nearly 300 of the 550 children at US border stations on Sunday had been held for more than 72 hours. Nearly half of those children are younger than 12.

The news come as the Trump administration pursues a new “zero tolerance” strategy along the border that is separating families by criminally prosecuting parents and other migrants for unauthorized entry into the United States. The number of migrant children in US custody increased by 21 percent last month, and the government’s shelters are nearing maximum capacity.

Greg Chen, the director of government relations at the American Immigration Lawyers Association, told NBC News that it “would be highly inappropriate and even unsafe to hold children for extended periods in these short-term border facilities because they often lack the adequate medical and nutritional resources for these young people.”

The United Nations condemned the family separations on Tuesday. Ravina Shamdasani, a spokeswoman for the UN High Commissioner for Human Rights, said, “The practice of separating families amounts to arbitrary and unlawful interference in family life, and is a serious violation of the rights of the child.” Sen. Jeff Merkley (D-Ore.), whose unsuccessful attempt to enter a facility for child migrants was documented in a video that went viral over the weekend, told reporters on Tuesday, “This is not a zero-tolerance policy. This is a zero-humanity policy.”

Under the law, children who arrive at the border alone generally must be transferred to the Department of Health and Human Services within 72 hours of determining that they are unaccompanied. The overstays at temporary facilities are a result of a backlog at HHS, according to NBC News. (DHS policy also calls for keeping adults in temporary facilities for less than 72 hours.) HHS shelters are at about 95 percent capacity, but the agency also has about 1,200 reserve beds if needed.

The administration is effectively turning these children into unaccompanied minors who need to be transferred to ORR, whose facilities have traditionally housed teenagers who arrive at the border alone. ORR will increasingly have to care for infants with very different needs because of the family separations. After living in ORR facilities, unaccompanied minors are usually transferred to sponsors, who are most often parents and other relatives.

Immigrant advocates say the Trump administration rushed into implementing the zero-tolerance policy without considering the stress that it would place on child welfare workers. Peter Boogaard, a spokesman for the immigration advocacy group FWD.us who worked at DHS during the Obama administration, told NBC News, “What’s happening now is a broad indication of a total lack of planning or forethought for the policy they enacted. They didn’t think this through at all—what it would mean for kids, for their parents, and for the operational challenges.”

Two DHS officials told Politico they had not seen any legal analysis before Sessions announced the new prosecution strategy. “In a normal administration, you make an analysis of the law and the policy change,” one of the DHS officials said. “The notion is to reduce litigation around it.” The official added, “It’s not clear to me that any of that foundational legal work has been done.”

The government has struggled for years to meet the 72-hour requirement. In 2014, as the number of unaccompanied minors arriving at the border increased dramatically, the National Immigrant Justice Center found that at least 29 of the 224 children it surveyed were kept in DHS custody for more than 72 hours. A 2014 complaint from the National Immigrant Justice Center, the American Civil Liberties Union, and other advocacy groups on behalf of more than 100 children found that roughly 70 percent reported being held for more than three days. The difference was that those children were arriving alone, instead of being turned into unaccompanied minors by US government policy.

Mitra Ebadolahi, a staff attorney with the ACLU’s Border Litigation Project, said on a Tuesday call with reporters that the situation in 2014 was a “massive problem.” She added, “Of course, that’s happening again now.”