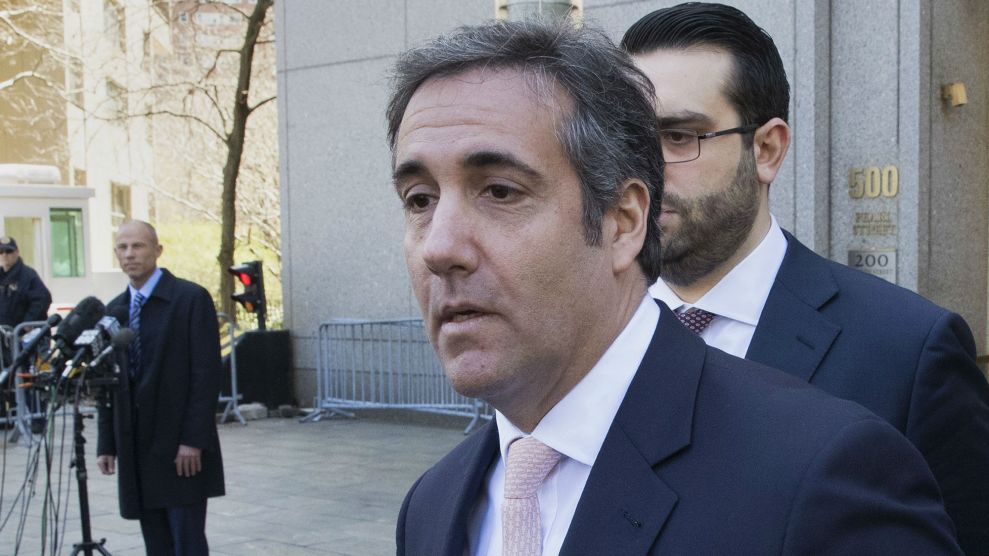 The implications of this were immense. Around the time the payments began, the US intelligence community had declared that the Kremlin had attacked the 2016 election in order to help Trump become president. Also around that time, Cohen had joined with a Ukrainian lawmaker and Felix Sater—a former felon who had worked with Trump on Russian-related deals and other projects—to secretly push within the new Trump administration a pro-Moscow peace plan for Ukraine. And in January 2017, Intrater, who had never been a major political donor, made a whopping $250,000 contribution to Trump’s inauguration committee. (Months later, he would give $35,000 to the Trump presidential campaign and the Republican Party.)

So what was Cohen doing hooking up with Vekselberg and Intrater at this point? And why would he even be messing with a Russian oligarch when Trump was being battered by reports of Russian interference in the election and possible contacts between Trump associates and Russia? Avenatti’s revelation—which was confirmed by the New York Times and NBC News—opened a new front in the Trump-Russia scandal, as it expanded into a swampy pay-to-play controversy and merged with Trump’s Stormy Daniels scandal.

In response, Columbus Nova, the company Avenatti identified as the conduit for the Vekselberg payments to Cohen, denied there was a Russian connection. An attorney for the firm released a statement insisting the money Cohen had received from Columbus Nova had not originated with the oligarch:

There was one big problem with that statement: Filings with the Securities and Exchange Commission show Columbus Nova has had a close organizational association with Vekselberg’s Renova Group.

Last month, Vekselberg and his Renova Group were hit with sanctions by the US Treasury Department. After that, Renova took down its website, which currently says “under construction.” But previously, the firm’s site listed Columbus Nova as part of the larger Renova Group, suggesting it was a subsidiary. Columbus Nova’s website also previously called the firm “the US investment vehicle” for Renova.

And several SEC filings related to Columbus Nova show that the firm and Intrater have been deeply interwoven with Vekselberg and his business empire.

In 2006, Intrater signed a form submitted to the SEC that described the relationship between Columbus Nova, which was then managing more than $1.5 billion in investments, and the Renova Group: “Columbus Nova is the U.S.-based affiliate of the Renova Group of companies, one of the largest Russian strategic investors in the metallurgical, oil, machine engineering, mining, chemical, construction, housing & utilities and financial sectors, with net assets of approximately $9 billion at the end of 2005.”

A 2007 report filed with the SEC by a company linked to Columbus Nova also used the same language and the term “affiliate” to characterize the link between Columbus Nova and Vekselberg’s company: “Columbus Nova is the U.S.-based affiliate of the Renova Group of companies.” It noted, “The Chairman of the Board of the Renova Group of companies is Victor Vekselberg, a prominent Russian industrialist,” and pointed out that Intrater was a cousin of Vekselberg. This filing reported that Intrater controlled Renova US Management LLC.

Other SEC filings show that Intrater has had an intertwining relationship with his cousin the oligarch that goes beyond providing investment services for Vekselberg’s firm. Both men were principals in the Moscow CableCom Corporation. An April 2007 filing related to that enterprise identified Renova Media, a Bahamian corporation, as the telecommunications arm of Vekselberg’s Renova Group. A filing submitted two months later noted that Intrater’s Columbus Nova was an affiliate of Renova Media. And the year before, Intrater signed an SEC filing related to Moscow CableCom on behalf of both Renova Media and Vekselberg.

The corporate ties in Vekselberg’s and Intrater’s world can get complicated. Here’s one example. According to a 2014 SEC filing, a shell company named Bounty Investments was based at Renova US Management, Intrater’s company (which shared an address with Columbus Nova). Intrater was the CEO of Bounty Investments, and the company was part of a deal in 2013 involving three other shell companies, including one called TZ Columbus Services, which was located in Tortola. A 2007 SEC filing noted that Vekselberg was the “principal beneficiary” of a trust controlled by TZ Columbus Services. And Intrater held the power of attorney for TZ Columbus Services.

Financial records do not provide the specifics of the relationship between Vekselberg and Intrater. But there appears to be much more to their business collaboration there than the statement from Columbus Nova acknowledges. Consequently, it would be reasonable for any investigation of Trump-Russia contacts to scrutinize the large payments from Intrater and Columbus Nova to Cohen, Trumps’s inauguration committee, the Trump campaign, and the GOP.