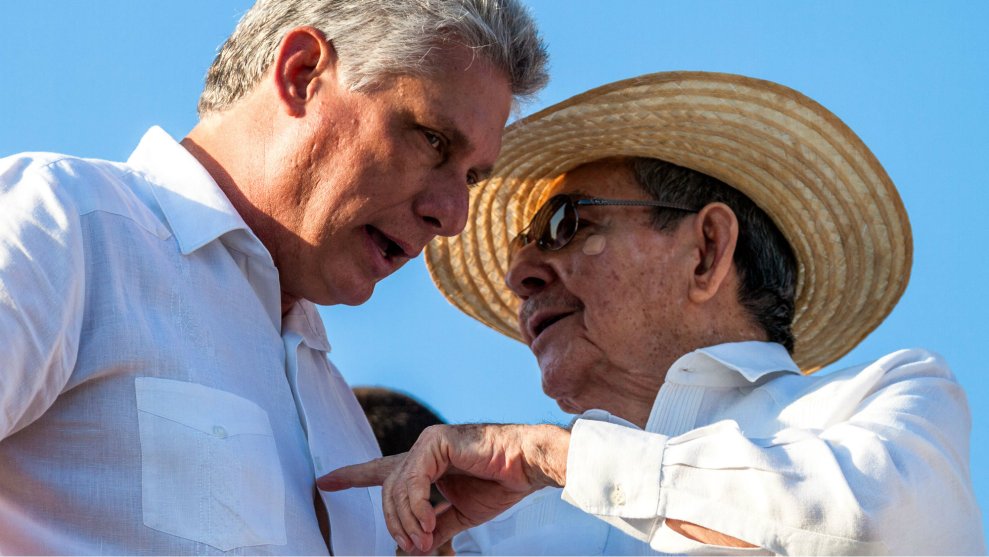 For the first time in more than half a century, Cuba will not be led by a Castro. On Thursday, Raúl Castro stepped down as the president of the communist nation, a position he’d inherited from his brother Fidel in 2008. His presidency was marked by significant changes for the island, including opening up a small but crucial private sector and renewing diplomatic relations with the United States.

Fidel Castro died in November 2016. Raúl, who turns 87 in June, is expected to hold onto his powerful position as head of the Communist Party of Cuba. On Thursday, Cuba’s National Assembly selected his successor, 57-year-old First Vice President Miguel Díaz-Canel, whom Castro reportedly has been grooming for this position for years.

So what’s next for a country that has only known one-party family rule since the Cuban Revolution of 1959?  We spoke with Peter Kornbluh, director of the National Security Archive’s Cuba Documentation Project, and coauthor of a 2015 Mother Jones article on Cuba’s back-channel negotiations with former President Barack Obama. Kornbluh discussed how history will remember Raúl Castro, the status of Trump-Cuba relations, and what we know about Cuba’s new president.

Mother Jones: What will be Raúl Castro’s legacy as president of Cuba?

PK:  For 10 years, he has been the undisputed leader of Cuba. His legacy is going to be built around several very important initiatives that he undertook that his brother really never did. He attempted to somewhat lessen state control of the daily lives of Cubans. You can see that in his decision to legalize the use of cellphones, legalize the private sale of cars and homes. Under Fidel there was this onerous paperwork and authorization you had to get if you wanted to leave the country. Raúl basically said people should be free to go and come back, or go and not come back and send remittances.

He really made the move to try and build a private sector in Cuba. Cuban economists have been saying for almost 30 years that the state simply cannot afford to have everybody on its payroll. Fidel had accepted it under great pressure after the collapse of the Soviet Union, but Raúl really opened up the private sector. In the short time that he has been president, the private sector has gone from being minuscule to including over half a million people, probably closer to a million Cubans called cuentapropistas, self-employed entrepreneurs, working in very small businesses.

Part of Raúl’s legacy is he didn’t really go far enough with this, that there have been fits and starts. Hardliners have put pressure to halt the growth of the private sector because it portends an inequality in society. Those who are in the private sector making money, particularly in the tourism sector, are becoming the haves, and the vast majority of Cubans in the state sector are essentially the have-nots.

The third element of his legacy is perhaps one of the most extraordinary. He agreed to normalize relations with the United States of America. In the end, history will record that it was Raúl who made the agreement with Barack Obama and opened the door to the situation that we have today, and not his brother Fidel.

“If Trump will stop trying to channel his inner Theodore Roosevelt, I think there could be a real opening here.”

MJ: What power will Castro exert from afar?

PK: Even though the mainstream press is saying this is the end of the Castro era, in fact, Raúl Castro retains two arguably more powerful positions than the presidency: first secretary of the Communist Party and, at least for now, head of the Cuban armed forces. He also has a son, Alejandro, who is very high in the Cuban intelligence community, though it’s somewhat murky what is happening with him right now.

Those positions are important for Raúl to have the back of the new president, Miguel Díaz-Canel, who, make no mistake, really is the person who Raúl feels has the capability to lead Cuba forward with a mix of modernization and respect for the principles of the Cuban revolution.

MJ: What do we know about the new president of Cuba, Miguel Díaz-Canel?

PK: Miguel Díaz-Canel has risen through the ranks of the Cuban Communist Party to the highest point of leadership. He is significantly younger than the leadership generation that is retiring with Raúl. He rose to be a provincial leader in the Communist Party. He is known to be a listener. He is known not to be an elitist.

He became education minister in 2009 until 2013, when he was moved to be first vice president. It’s hard to know what his real positions are. On the one hand, he has been caught on tape trying to bolster the hardline side of the Communist Party by railing against more independent websites and news outlets. On the other hand, he is somebody that thought the internet should be expanded significantly in Cuba. I think what’s most significant is that his position on the United States is relatively unknown. He is going to become president in the midst of a tonal attack by the Trump administration.

MJ: Where do US-Cuban relations currently stand under the Trump Administration?

PK: Cubans and the United States still have to work out what happened with the health problems of US and Canadian personnel in Cuba. [Diplomats experienced mysterious brain injuries in 2016.] They have to work this out, even if it takes Cuban intelligence and CIA officials sitting down very quietly together to discuss what technologies they might be using against one another. We have a travel advisory in place that is hurting US travel to Cuba. That travel advisory is not going to go away until they resolve what happened.

“Cubans are looking for a significant improvement in their daily existence, which frankly is a struggle.”

The Trump administration has completely changed from the daylight of the Obama era and a tone of respect and civil dialogue and negotiations with the Cubans, to the darkness of regime-change rhetoric, abusive insults, and being a bully from the bully pulpit. That said, the policy that Obama and Cuba and Raúl arrived at has not significantly changed. US businesses can still work in Cuba under certain restrictions. We still have various teams of diplomats that meet somewhat regularly. We just had more plane routes approved, more cruise ships approved. It’s not as if relations are being broken, even if the sounds from Washington have gone from being respectful to being abusive and malicious. Hopefully, on the Cuban side, they understand this is part of the theater of the Trump era and they focus on the substance of our relations.

It would be to the benefit of all that the Trump administration understands that this is a transitional point in Cuba. The best way to take advantage of that is to work toward civil and more normal relations. Trump seems to have no problem having relations with other strongmen around the world. If Trump will stop trying to channel his inner Theodore Roosevelt, as a kind of bully from the imperial Colossus of the North, I think there could be a real opening here.

MJ: What are Cubans hoping to see from their new president?

Educated Cubans don’t see a future for themselves, and by and large the majority of them try to leave. It’s incredibly disheartening. The Cuban state as a society makes this amazing investment in its young people to educate them, give them incredible skills and talents and creativity. Then they can’t offer them anything that makes it worth staying in their own country.

There aren’t high hopes that this is going to be some significant change. If anything, there’s a bit of trepidation about who the people who are going to take over really are. Díaz-Canel is perhaps known more in the province where he worked on the ground than he is known nationally. He has kept a low profile as first vice president. Other members of his generation who took a high profile found themselves purged. So he’s a survivor. But you don’t get to be to the top of the Cuban Communist Party and the president of Cuba without being a stalwart member of that system. There’s no evidence there will be a shocking change here. This is going to be a significant transition, but it’s also going to be an evolutionary one.