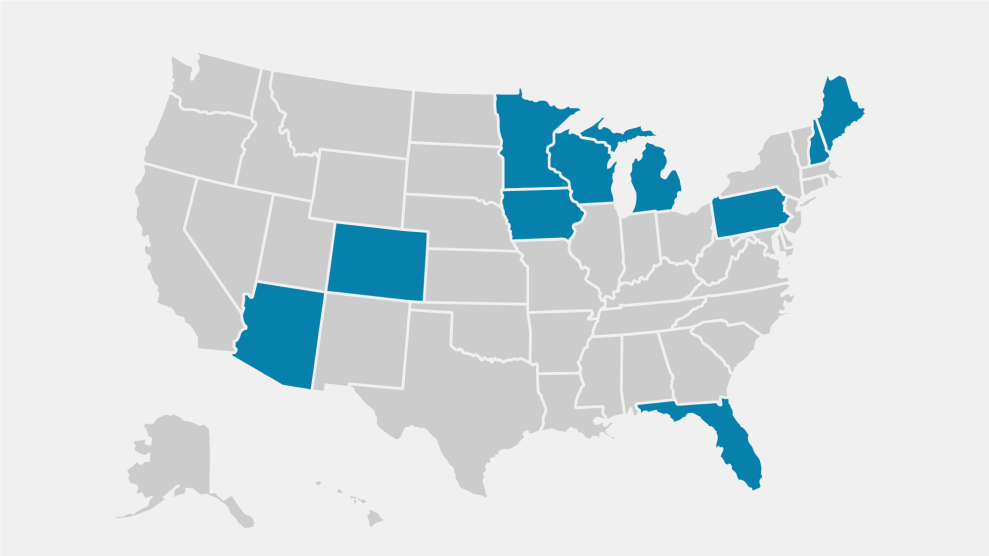 On Election Night in 2010, as Republicans swept races big and small across the country, Jessica Post found herself sitting on a cold sidewalk outside an Irish pub in Harrisburg, Pennsylvania. Then the field director for the Democratic Legislative Campaign Committee, the party organization that helps get state-level candidates elected, Post promised herself in that moment that she’d help rebuild their party from the ground up.

Eight years later, Post is now the DLCC’s executive director and spearheading efforts to win local seats in districts where the party hasn’t been competitive in a decade. She’s banking on much better funding, anti-Trump sentiment among moderates, and candidates who connect with voters on hyperlocal issues (think Virginia state representative Danica Roem’s fixation on traffic congestion on Route 28) to overcome a decade of Republican gerrymandering.

Post told Mother Jones she thinks the Democrats could take back up to 10 state chambers—just in time for the redrawing of the congressional maps following the 2020 census. Here’s how they rank, from easiest to hardest to flip.

Just One Seat Away

Colorado Senate: Seventeen of the Colorado Senate’s 35 seats will be up for election this November, in a chamber that has a tradition of competitive races, a near 50-50 split between parties, and some insulation from national waves. Colorado’s Senate stayed blue through the 2010 wave but ultimately flipped in 2014. From 2012 until 2014, Democrats had a 19-16 edge over Republicans.

Arizona Senate: Democrats hope Christine Marsh can be one of three candidates to help win back this chamber, which they haven’t controlled in more than 20 years. Marsh, an English teacher at a Scottsdale-area high school, was named the 2016 Arizona Teacher of the Year and spent a visit to the White House calling for increased funding of public education. The filing deadline for Arizona primaries isn’t until May, but Marsh may face incumbent state Sen. Kate Brophy McGee come November.

New Hampshire Senate: Republicans flipped this chamber amid the 2010 tea party wave, taking 19 of the state’s 24 Senate seats. The GOP now holds a 14-10 majority. But momentum is on Democrats’ side: Hillary Clinton won the state in 2016, and Democrats have flipped four House seats since, most recently in February, when Democrat Philip Spagnuolo won a district that Trump had carried in 2016.

Wisconsin Senate: Half of the state’s 33 seats are up for election this November. As in New Hampshire, Republicans took control in 2010. Republicans have since widened a five-seat majority to seven, and Trump won the state—arguably with the help of voter suppression—in 2016. Now that the DLCC flipped one Republican-leaning Senate seat in a special election in January, it’s hoping to flip at least one more in special elections this June—the same month the Supreme Court will likely announce a decision on whether the redistricting plan in Wisconsin’s lower chamber is an unconstitutional, partisan gerrymander.

Four or More Seats Away

Florida Senate: Democratic enthusiasm seems to be running high in this swing state: In February, Democrat Margaret Good defeated Republican James Buchanan with 52 percent of the vote in a district Trump narrowly won in 2016, and now, after a special election victory earlier this week, Democrats need four more seats to take the state Senate.

Michigan House: Community organizer Padma Kuppa is one of the Democrats’ candidates who Post thinks has a shot at winning one of the nine seats the party needs to take back the House, which Democrats lost control of in 2010.

Iowa House: Democrats have outpaced Republicans in candidate filings and need 10 seats to flip the chamber. According to Ballotpedia, 112 Democrats and 93 Republicans had registered by the March filing deadline.

Pennsylvania House: Twenty seats are needed to flip this chamber, which seems like a long shot. But University of Pennsylvania political scientist Matt Levendusky argues that should Democrats run candidates well suited to the state’s swing suburban and rural districts, they just might pull it off. The DLCC is already eyeing a special election in May for what it calls a “toss-up” House seat.

Minnesota House: Minnesota, where voters have cast their ballots for Democratic candidates for president every cycle since 1976, is one of 16 states under a divided government. Republicans control the Senate and the House, which Democrats need 11 seats to flip, while outgoing Gov. Mark Dayton is a Democrat. Post told Mother Jones that Democrats are also targeting the state Senate—elections for those seats will be in November 2020.